Where a drink of water may mean death: gold isn’t the only legacy from mines. . .

Although the boom days of prospectors and gold nuggets are long gone, modern technology enables gold to continue to be extracted from ore. Unfortunately, the extraction method has often been disastrous for bats and other wildlife, an issue I first became aware of in early 1989. Phone calls from Drs. Merlin Tuttle and Elizabeth Pierson, a BCI member and bat researcher from Berkeley, California, alerted me that bats were dying from apparent cyanide poisoning at gold mines in the western United States.

After extensive investigation, I concluded that the problem was major. Based on data collected since 1980, and provided by 75 mines in Arizona, California, and Nevada, wildlife deaths through 1989 totalled 7,609 vertebrates. Ninety–two percent were birds and 7% were mammals. Among the reported 519 mammals between 1984 and 1989, 34% were bats. The number of gold mines in these three states is estimated to be 160 and growing.

Today’s gold is microgold. High-grade ore contains only 0.05 ounces per ton but the gold is recoverable because it dissolves in a cyanide solution like sugar dissolves in water. The solution (usually with 100-300 parts per million cyanide) is channeled into ponds which are often left exposed. Mortality likely occurs when wildlife come to drink, and it is also possible that scavenging birds, mammals, and reptiles may ingest cyanide-poisoned wildlife.

To understand the problem, it is helpful to know a few basics of modern gold mining. There are two principal methods of using cyanide solution to extract gold from ore. In vat leaching, it is mixed with crushed rock in large enclosed vats where gold adheres chemically to pieces of added carbon. When the spent ore (tailings) and cyanide are sluiced to a mill-tailings pond, the carbon is retained. Gold is then removed from the carbon in a closed system, using stronger cyanide solutions and heat. Ultimately, gold is electroplated from the mixture.

The resulting mill-tailings ponds are often vast, sometimes 200 or more acres. They may last the life-span of the mine (five to 15 years) and, in most operations, are surveyed for dead wildlife only depending on degree of concern or availability of mining personnel.

Heap leaching is the other method. Crushed ore is piled on plastic sheeting on a large, flat-topped hill, or heap, where cyanide is sprinkled or dripped from hoses on top. After the solution percolates through the heap, it is collected and channeled by pipes to a pregnant pond (i.e., containing gold). It then passes through carbon filters that separate the gold, which is extracted the same way as in vat leaching. The solution, now without gold, is piped to a barren pond where it is recharged and returned to the top of the heap in a continuous cycle.

Pregnant and barren ponds average about one acre, are easily surveyed for dead wildlife, and are maintained for months or years. To prevent leakage, the bottoms are fitted with a plastic liner, as are most mill-tailings ponds.

Additional pools are also formed on top of heaps. These long, narrow pools lie in furrows of ore and are relatively small. Since they are transitory and difficult to reach by vehicle, mining personnel usually do not check them for dead wildlife.

Solutions to prevent mortality at these ponds have included various noise-making devices and colored flagging, which not only is ineffective for nocturnal animals, but also is ignored by other wildlife. Nothing has been as successful as covering ponds with nets to prevent wildlife from visiting them. The Cyprus Copperstone Mine, a vat-leach operation near Quartzsite, Arizona, has two relatively small mill-tailings ponds, 18 and 23 acres. Netting these ponds has completely ended mortality.

Unfortunately, most mill-tailings ponds are too large to cover, and because ponds on top of heaps are difficult to reach, they also are never netted. Most pregnant or barren ponds, however, are easily netted, though factors such as being torn by wind or loads of snow and ice must be taken into consideration.

Data on wildlife deaths are minimum estimates, most notably for bats. Because bats are small and dark, they are difficult to find and identify. Bats drink in flight over open water and so are likely to disappear into the pond, while many kinds of birds and other animals are more likely to die on land where they can be found. Bats are also of much less concern to most miners than birds. The Migratory Bird Treaty Act makes it illegal to kill most migratory birds except game. Although it subjects miners to fines and other legal actions, thus far, enforcement has been limited to two cases in Nevada.

What data there are on bat deaths seem to indicate that mortality is concentrated in late summer and fall when many bats are migrating. Of 172 deaths reported by quarter one year by 15 mines, 16% occurred between April and June, 59% from July through September, and 25% from October through December. None were reported from January through March.

In Arizona, California, and Nevada, the geographic ranges of six bat species on federal or state lists of endangered, threatened, or otherwise protected wildlife have cyanide-extraction gold mines within their jurisdictions. Whether cyanide is killing any of these bats is not known. However, Dr. Patricia Brown, a BCI member and bat researcher with the Maturango Museum in Ridgecrest, California, believes that cyanide may have destroyed a population of Townsend’s big-eared bats (Plecotus townsendii) in east-central California. The species is considered endangered in part of its range and is a candidate for federal listing as well.

Cyanide gold mining is also occurring in the northern plains, the American Southeast, and Alaska. Ridgeway Mine in South Carolina is a vat-leach operation with a 200-acre tailings pond. Between its opening in December 1988 and the end of 1990, 271 dead vertebrates were reported. Eighty-six percent were birds, 13% mammals, and the rest reptiles and amphibians. Of the 35 mammals, 29 were bats. They included 12 red bats (Lasiurus borealis), all found in September and October, indicating that they may have been migrating. The 1990 bat deaths at Ridgeway occurred when the mine reported cyanide less than 20 parts per million in the tailings pond, a concentration considered very low. Previously, miners and others believed wildlife to be safe with 50 parts per million cyanide.

A colleague of mine, Dr. Elwood Hill, was also concerned with the wildlife deaths and proposed that the Patuxent Wildlife Research Center (U.S. Fish and Wildlife Service) investigate the problem. A study is now underway that will measure the sensitivity of representative wildlife species to cyanide and will determine methods to identify whether cyanide poisoning is the cause in any specific wildlife death. It also seeks to determine the importance of several metals to cyanide toxicity when each is bound with cyanide, and to evaluate the importance of solution pH to toxicity. These basic data will be essential in understanding cyanide-induced wildlife deaths.

The real effects of cyanide-extraction gold mining on bat populations are unknown. The method is expanding into new areas and involving states that have not dealt with it before. New poisonous watering sites, especially those created in arid areas, have the potential for destroying large numbers of both local and migrating bats. Such ponds along a migration flyway could affect bat populations as far north as Canada. These sites also could have major impact on local populations who, especially during summer, often travel long distances just to reach water.

Officials need to know of the threats to wildlife to preclude erroneous opinions of “there’s-nothing-living-out-there-anyway.” They also need to know that netting of ponds or detoxification are the best approaches to preventing deaths. As gold mining expands, people concerned about bats and other wildlife must become aware of the potential hazards.

Donald R. Clark, Jr. is a senior research biologist with the U.S. Fish and Wildlife Service at the Patuxent Wildlife Research Center in Laurel, Maryland, where he has worked on the effects of environmental contaminants on bats for the past 19 years. He is a longtime member of BCI.

NOTE: This article is based on a paper published in California Fish and Game, vol. 77, Spring 1991, in which sources are cited. 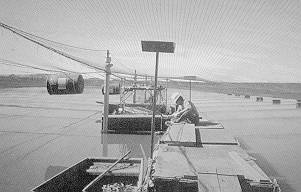 Bat deaths from cyanide leaching ponds appear to be concentrated during months when many bats are migrating. Transitory ponds on top of heaps, such as this one, are difficult to survey for wildlife mortality. 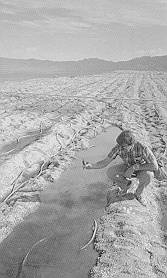 Research biologist Roger Hothem takes a sample of cyanide solution from the completely netted 18-acre mill-tailings pond at Cyprus Copperstone Mine in Arizona. Wildlife mortality ended completely after the pond was netted.