Big brown bats (Eptesicus fuscus) are found in every part of the United States except the southern parts of Florida and Texas. There are many good reasons for farmers, and indeed all of us, to welcome and encourage these bats in our fields and yards, but the best reason is because of what big brown bats eat.

Some of their major foods are beetles and true bugs, most of which are significant agricultural pests. These include cucumber beetles (genus Diabrotica, family Chrysomelidae), May beetles or June bugs (genus Phyllophaga, family Scarabaeidae), green and brown stinkbugs (Pentatomidae), and leafhoppers (Cicadellidae). In one summer season the 150 bats of an average midwestern maternity colony can easily eat 38,000 cucumber beetles, 16,000 June bugs, 19,000 stinkbugs, and 50,000 leafhoppers. These estimates are very conservative and do not include the many other insects eaten.

Cucumber beetles are one of the most significant agricultural insect pests in the United States. The adults attack corn, spinach, and various vine plants, but the greatest impact is by the larvae— corn rootworms. Rootworms can reduce corn productivity by 10 to 13 percent, with insecticide costs to control them running from $15 to $25 per acre. Their appetite costs farmers in the United States about one billion dollars annually.

These pests are a particularly favored prey of the big brown bat and often total up to one third of the food eaten by a typical midwestern big brown bat colony. If such a colony ate the previously mentioned 38,000 adult cucumber beetles in a season, it would also mean that about 18 million rootworms were not produced.

Both stages of June bugs are also highly injurious to plants. The adults may defoliate trees, and the larvae (grubworms) feed on the roots of grasses and other plants. Stinkbugs are often pests in orchards and on soybeans. Leafhoppers are serious pests of many plants. They feed on the sap, which can reduce productivity, and they also often serve as vectors for various plant diseases.

Can a typical bat colony make a difference to farmers who want to use natural biological insect control? The evidence certainly suggests that it can.

(Bio)
John Whitaker is a professor of life sciences at Indiana State University and has been studying the diets of bats for 25 years. 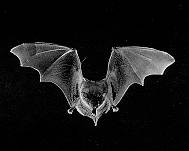 With their voracious appetite for beetles and various bugs, big brown bats are one of a farmer’s best allies in controlling agricultural pests.