The nocturnal habits of bats have no doubt contributed to the many myths that bats are creatures of another, unearthly world . . .

Since antiquity, people have perceived many of the physical features of bats as strangely similar to those of humans. The great 18th century taxonomist Linnaeus noted that, among mammals, only humans, other primates, elephants, and bats possess a pair of breast nipples for suckling their young, a feature that led Linnaeus to place bats near humans in his classification. But the pointed ears of bats, their sharp teeth, leaf noses, wart-like protuberances on their chins, and their leathery wings supported by the same bones that are in the arms and hands of humans, have long led the superstitious to imagine that bats are merely a grotesque parody of the human form.

The persistent association of bats with the supernatural and the idea that they inhabit a world related to, but beyond, our existence undoubtedly also derives from the habits of bats. Bats are active at night while people sleep, and many bats spend their days in caves, abandoned buildings, church steeples, and tombs.

The layperson or novice bat biologist might even imagine that there are examples where scientists have fallen victim to the association of bats with the netherworld. The species name of the common North American little brown bat (Myotis lucifugus), might connote an association with Lucifer, the fallen Archangel. That was not, however, the intent of “lucifugus,” which has the less forbidding translation of “light fleeing.” (It is interesting to note that “lucifer” means “light bringing,” and that prior to his fall from grace, Lucifer was the most beautiful of the Archangels.) Then there is the Neotropical fruit bat, Vampyrops helleri. Despite appearances, this bat was not named for the abode of the damned, but in tribute to Florian Heller, a biologist.

One common folk belief is that bats are human souls that have left the body. Contemporary Finnish folklore relates that during sleep, the soul leaves the body and may appear as a bat. Such lore also explains the disappearance of bats during the day, since when humans awake, their souls return home to their bodies. In his 1939 book Bats, G.M. Allen reports testimony on the validity of this belief from an aged Finn who related an example where, upon awakening, a man could remember the places he had visited as a bat the night before.

When seen as human souls, bats are often imagined as souls of the dead, particularly souls of the damned, or those that are not yet at peace. Both African-Americans and those of European descent from around the United States frequently maintain that bats are “ghosts” or “haunts.” Sicilian peasants relate that the souls of persons who meet a violent death must spend a period of time, determined by God, as either a bat, lizard, or other reptile. In the Auguries of Innocence, William Blake saw the bat as the damned soul of the infidel:

The bat that flits at close of eve
Has left the brain that won’t believe.

An even earlier example of Western tradition associating bats with souls of the damned is provided by Homer when Hermes conducts squeaking, bat-like souls to Hades (The Odyssey, XXIV, 5-10). In Greek mythology, the bat was said to be sacred to Proserpina, the wife of Pluto, ruler of the underworld.

There is also long tradition associating bats directly with the devil and evil spirits [BATS, Winter 1992]. In medieval Europe, artists typically represented devils with bat-like wings and pointed ears. Gustave Doré’s illustrations for Dante’s Inferno followed the tradition of portraying good spirits with the wings of birds and evil spirits with the wings of bats. Similarly, the Mayas of Central America had a bat God, Cama-Zotz (or “death bat”), depicted as a man with bat wings and a bat-like leaf nose, who lived in a region of darkness through which a dying man had to pass on his way to the netherworld.

The association of bats with the devil continues today in many cultures. An African-American folk legend relates that the devil may appear as a bat. In Ohio in 1962, a student nurse of eastern European extraction related that “bats are the devil in bat form.” A contemporary Mexican belief is that bats are diablos (devils) from hell. Such lore is encountered today in the common expression “like a bat out of hell” (which even made it into contemporary music as a title by rock musician Meatloaf).

If not the devil itself, the bat is frequently seen as helping the devil in its work. This is evidenced by the frequent associations of bats with witchcraft [BATS, Fall 1992]. A Russian legend repeated by G.M. Allen relates that Satan wished to create a man, and after fashioning a human form from mud, could not give it life. Satan then enlisted the aid of the bat to fly to heaven and steal God’s sacred “towel,” which would give Satan’s creation a divine nature. The bat complied, and according to the legend this is why God owns man’s soul and Satan his body. God punished the bat for helping Satan by taking away its wings (presumably its feathers), making its tail naked, and fashioning its feet like those of Satan.

There is also persistent folklore repeated in many parts of the United States in which the bat is said to be the “child” or a creation of the devil. German devil myths are discussed by L. Rohrich in a 1970 article in the Journal of the Folklore Institute (VII, 21-35). Rohrich relates tales about how the devil attempts to imitate the creations of God, but never quite gets it right. God creates a bird; the devil attempts to imitate God’s creation, but ends up with a bat. God makes man; the devil, apes, and so on.

In a complete reversal of this creation myth, a Mohammedan legend relates that the bat was created by Christ. In this myth Jesus was in the desert outside of Jerusalem attempting to keep the fast of Ramadan, which forbids eating food between sunrise and sunset. Because mountains obscured the western sky, Jesus could not tell when the sun sank below the horizon. With God’s permission, Jesus fashioned the winged likeness of a bat from clay and breathed life into it. The bat quickly flew to a nearby cave, but each evening it emerged at sunset, which told Jesus that it was time to take food.

Although folklore persists, most people know that bats are not disembodied spirits or the devil’s friends, confidants, or alter egos. Increasingly, people are coming to know that bats are one of the most diverse, interesting, and ecologically important groups of mammals. The myriad of physical, ecological, and behavioral features that make bats so prominent in folklore are the products of natural selection, demonstrating once again that the natural often surpasses the supernatural.

(Bio)
Gary F. McCracken is a professor in the Department of Zoology and the Graduate Programs in Ecology and Ethology at the University of Tennessee, Knoxville. He has studied bats for many years and is author of the entry on bats in The Encyclopedia of American Folklore and Superstition. 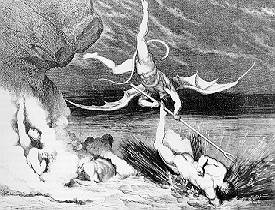