Folklore about bats abounds, but none so common as the belief that they get into your hair…

The lifestyles of bats make them a natural for folklore the world over. Most are small and shy and active only at night when most people do not see them. They often live in caves or abandoned buildings, places often associated with danger or ghosts. They have fur like other mammals, but they fly like birds and can navigate in total darkness. It is little wonder that superstition and myth about such paradoxical creatures abound.

One of the most common themes in folklore about bats is the belief that they become entangled in human hair. Such stories come from throughout the Americas, Europe, and Asia. Wearing white clothing is often said to attract bats, which will then get into your hair–thought to be a particular peril for women. According to common beliefs, once a bat gets into a woman’s hair, removing it is difficult. Some maintain the bat will never let go and that the woman must cut off her hair to get rid of the bat. Other folklore asserts that the bat will stay until driven out by thunder and lightning.

The feared consequences of a bat in your hair can range from annoying to lethal and worse. Some beliefs are that your hair will snarl or turn gray or that the bat will pull it out. A similar belief found from the south of France to Canada is that if bat droppings fall in your hair, you will become mangy or even bald. (For years, I conducted research within the enormous cave colonies of Mexican free-tailed bats in Texas, and I have washed enough bat droppings out of my hair to fertilize a large cow pasture; I’ve noticed no loss of hair.)

Another widespread belief is that bats getting into your hair will cause infestations of “bugs,” bedbugs, or lice. While bats have mites and a variety of ectoparasitic insects, lice have never been found on bats. Humans, however, have their own unique species of head louse (and a pubic louse, also). It would seem if a bat were to get into a person’s hair, the bat would be the one far more likely to catch lice from the human!

Other consequences of a bat getting in your hair are thought to be bad luck or insanity. French folklore maintains that a bat in a woman’s hair presages a disastrous love affair. The worst that can happen is if the bat escapes carrying a strand of her hair; in Ireland it is believed that this will result in eternal damnation.

Regional beliefs in the United States describe several other serious consequences. In Ohio, one woman predicts that if a bat flies off with a strand of a person’s hair and puts it in a tree, the tree will die, and then so will the person. Missouri folklore relates that a bat in your hair leads to insanity. In North Carolina, a bat doesn’t even have to get into your hair to cause problems: lifelong headaches are predicted if a bat merely strikes your head. Another Ohio legend cautions that if a bat only just flies over the head of a child, the parents must make a concoction of oils and coffee mixed with some of the child’s hair and clothing. Otherwise, the child will stop growing.

Do bats really get into human hair? Certainly there are occasions when this happens, but hardly enough to explain the profusion of myths. While working in the large cave colonies in Texas, I’ve had bats in my hair, as well as up my pantleg and just about everywhere else. But this is to be expected in a disturbed roost containing several million bats, and myths about bats in hair do not come from the relatively few people who put themselves in such extreme situations. In the 1939 classic, Bats, Glover M. Allen documents only one case of a bat actually getting caught in a woman’s hair, much too rare an event to account for the numerous myths of bats in hair.

I believe most stories about bats getting into hair originate from common bat behavior. Bats frequently fly low over the heads of people who are walking outside, or sitting on their patios or around swimming pools or near lakes in the evening. The numerous “bat attacks” reported near patios likely result when insects are attracted to the lights, and incidents around pools and other bodies of water probably occur because insects commonly aggregate over open water. In both cases, the insects attract bats.

Foraging bats often swoop over people’s heads at night, but they are in search of insect prey, not hair. The rapid, seemingly erratic movements of echolocating bats in hot pursuit of insects, who are making similar moves to avoid the bats, often cause people to think they are being attacked. People walking in a field or on an open trail in a forest may also flush insects and make it profitable for bats to forage above the walker.

Undoubtedly, some reports of bat attacks also result from mistaken identity. In America’s Neighborhood Bats, Merlin Tuttle relates one such instance in which a screech owl guarding her nest attacked people who came near her tree. In the dim light, the owl was mistaken for a bat.

Another factor is simple exaggeration. When someone calls my office reporting a problem with bats, the bats are almost always “big,” even when they turn out to be among the smallest species. Conversely, when I show a bat to school groups and others, they invariably remark how small the bat is, even if it is a relatively large big brown or hoary bat. People exaggerate the size of bats just as they exaggerate the size of a sand shark or barracuda if they encounter one while swimming in the ocean. Similarly, I think people frequently overestimate how close a bat comes to their head when swooping after an insect.

While folk tales about bats getting into hair are common, these stories are only a small part of a larger body of folklore that connects bats with hair, either that of humans or the bats’ own hair. (The contemporary French word for bat, for example, is chauve-souris, or bald mouse.) As I’ll discuss in my next article, the use of bat hair (wool of bat), as well as other “bat products,” in potions and medicinal concoctions is not confined to the recipe of Shakespeare’s witches.

NEXT: Bats in magic, potions, and medicinal preparations 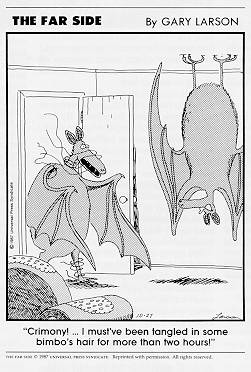 The Far Side 1987 UNIVERSAL PRESS SYNDICATE. Reprinted with permission. All Rights Reserved. 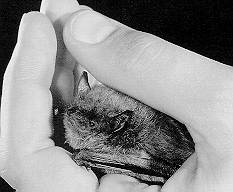 People frequently embellish the tale when bats fly near them, including how big the bats are. The little brown bat, one of North America’s most common bats, is very small but has a wingspan of 8 to 10 inches, making it appear much larger in flight than it really is.

EDITOR’S NOTE: Readers are invited, indeed encouraged, to send any additional bat folklore–on any topic–from their own region. While this series focuses primarily on American and European folklore, the author would like to hear from all cultures, worldwide. The final installment in this series will be devoted to what we learn from you. Please send stories, and as much information as is known about their origins, to BATS Editor at Bat Conservation International.

Gary F. McCracken is a professor in the Department of Zoology and the Graduate Programs in Ecology and Ethology at the University of Tennessee, Knoxville. He has studied bats for many years and is author of the entry on bats in The Encyclopedia of American Folklore and Superstition