150 nonreleasable bats are the legacy of one BCI member’s chance encounter with an injured bat . . .

Illustrations by Joann Rounds from The Bat in My Pocket, used with permission from Capra Press, Santa Barbara, California

I arrived in the small town of Mineral Wells, Texas, during a summer heat wave. Inspired by Amanda Lollar’s book, The Bat In My Pocket, I had written to her earlier in the year to inquire about internship opportunities. Now, here I stood at the doorstep of the woman whose life had been dramatically changed by a chance encounter with a wounded bat some ten years ago.

That fateful summer day in 1989, Amanda found an injured Mexican free-tailed bat (Tadarida brasiliensis) as she was walking to her local bank. Thinking all bats were vermin, but not wanting this one to suffer on the hot sidewalk, Amanda scooped it into a piece of newspaper with the toe of her shoe. Returning to the furniture store she and her mother owned, Amanda put the bat in a box with a dish of water and a piece of apple, then stowed it in a storage room so it could die peacefully. The tiny animal clung to life, however, so Amanda decided to help it. After a trip to the local library taught her that bats were really the opposite of what she had thought, she named it “Sunshine.” Although Sunshine died 18 months later, the little bat inspired the creation over the next five years of what Amanda calls “Sunshine’s legacy”—the Bat World Sanctuary and Educational Center.

Formerly the family furniture store, this historic downtown building no longer bears any resemblance to its retail beginnings. Now, well-planned interpretive displays and a small gift shop form a lobby that ushers in as many as 3,000 schoolchildren a year for field trips. Past the lobby are murals of forest and rimrock habitat and sky speckled with cumulus clouds. Grass huts contain Amanda’s office and my tiny living quarters. The huts stand in front of the entry to the “Enchanted Forest,” where the noisy chatter of fruit bats can be heard in the background. Upon entering the forest, one gets the impression of standing under a thick canopy of trees.

So far, more than 150 nonreleasable bats have permanent refuge in this little tropical paradise, including bats confiscated from the illegal pet trade, permanently injured, or orphaned. Their flight cages blend in so well with the forest theme that they are barely noticeable on each side of the forest pathway. In the back is a small but adequate rehabilitation room, where bats in need receive medical care and recuperate in comfortable cages designed for quarantine and isolation. Both Amanda and her one regular volunteer, Jason Bayless, have had rabies pre-exposure vaccinations because they so frequently handle sick bats. To ease the stress of captivity, Amanda has created simulated natural habitats for the sick bats. Crevice-dwelling bats have soft, cushioned pouches to hide in, and foliage-dwelling species can roost on synthetic leaf-covered branches. Ironically, this area where Sunshine was originally placed to die is now used for lifesaving treatment. Up to 200 bats are rehabilitated and released back to the wild each year.

Many of these bats are found locally, as Mineral Wells supports a large population of bats attracted to the older two- and three-story buildings downtown. In 1991, Amanda launched a bat house project, in which she excluded bats from buildings free of charge, as long as the building owners agreed to have bat houses mounted on their outside walls [BATS, Summer 1994]. The project was successful; before long, there were few reports of bats in buildings. To top it off, business owners who once disliked bats were even heard debating whose house had the most bats!

As the novelty caught on, business logos and advertisements were added to the houses, often with humor. For instance, the First State Bank’s two bat houses are labeled “Nite Deposit” and “First State Bats.” Now, there are more than 30 bat houses throughout the downtown area, of which about 75 percent are occupied. Amanda’s father, retired Army Major Luther Lollar, made each of the houses, and has since taken outside orders and constructed almost 300 more!

The following year, Mineral Wells gained a much larger “bat house”—the Wild Sanctuary, just a block from Bat World. This historic, two-story structure had been built as an apartment building in 1899 out of hand-hewn sandstone. Vacant for decades, its crumbling and shifting rock walls provided ample openings for thousands of bats to inhabit the upper crawl space of the top floor. In 1992, Amanda discovered that the owner was about to sell the building and intended to exterminate the bats. No one was surprised when, despite financial hardship, Amanda purchased the building to save her winged friends. It now provides permanent sanctuary for approximately 20,000 Mexican free-tails. Each spring, a maternity colony of about 500 additional females moves in.

Improvements to the Wild Sanctuary building are ongoing. So far, Amanda has added a new roof, installed a pre-release flight cage, and removed various planks to allow ventilation for the colony and a clearer view for observational studies on behavior. Because the ceilings are 12 feet high, catwalks have been constructed for better viewing; however, this type of viewing is limited in order to avoid disturbance to the colony.

At the time I arrived in Mineral Wells in early July, baby bat season had just begun, and Amanda and I began checking the sanctuary building several times daily. Almost every day, tiny, emaciated orphans wandered out of the cracks and onto the outer wall of the building to look for mothers that, due to untold misfortunes, would never return. Amanda often finds adult bats as well, suffering from dehydration or injuries. If warranted, she takes them back to Bat World for treatment. In addition to these local rescued bats, Amanda receives injured bats from a network of wildlife agents, researchers, and zookeepers, with a variety of ailments such as fractures, electrical burns, and blunt-trauma injuries inflicted by humans.

During the summer months, feeding is the most time-consuming activity. Formula is purchased by the case during baby bat season, but each week this nonprofit facility goes through an astounding grocery list—15,000 mealworms, 20 jars of baby food, 12 ounces of vitamin supplement, and 125 pounds of fruit including bananas, apples, peaches, pears, grapes, melons, mangoes, and figs—creating a constant struggle to make ends meet. Amanda resides in a small loft above the kitchen and treatment areas. Her work begins around 5:00 each morning, leaves few (if any) real breaks for meals, and ends around midnight on the good days. Interruptions such as the unexpected visitor or an increase in the day’s rescues frequently lengthen that day by two or three hours. Her father helps immensely by building cages, as well as purchasing and cutting up an enormous quantity of apples and melons every week.

In autumn, as the number of bats in need of rehabilitation decreases, the entire format of Bat World changes with the seasons. Amanda places particular importance on the education of children. Elementary- and secondary-level students come from across the state to witness bats close-up, in flight, and just “hanging out.” They learn about the ecological importance of each bat species and the potential dangers of handling wild animals, as well as the personalities of individual bats. The star of Bat World’s program is “The Amazing Bucko,” an African straw-colored flying fox (Eidolon helvum), who loves to flap and show off his impressive three-foot wingspan. Other species on view include Egyptian fruit bats (Rousettus aegyptiacus), Jamaican fruit bats (Artibeus jamaicensis), big brown and little brown bats (Eptesicus fuscus and Myotis lucifugus), hoary bats (Lasiurus cinereus), pallid bats (Antrozous pallidus), evening bats (Nycticeius humeralis), and of course, Mexican free-tailed bats.

Throughout the year, the small amount of spare time Amanda has left is spent on her true passion: behavioral studies of the Mexican free-tails. For the past eight years, Amanda has maintained a small colony of non-releasable free-tails, which now numbers more than 80. To date, these bats have reproduced six times in captivity. Amanda has logged more than 12,000 hours of observation during hand-feeding sessions. Each bat has a name, and I was amazed to see that she could tell individuals apart at a glance—so amazed that I decided to conduct a test of her recognition skills. We placed 75 bats in 75 separate containers, each labeled with the name of the bat enclosed. After the containers were placed out of Amanda’s view, I randomly brought each individual to her. Without exception, she instantly and correctly identified every one!

Amanda’s findings about free-tails include the discovery, later documented with fellow bat rehabilitator Barbara French, of a mating song used by males [BATS, Winter 1995]. The two friends believe that free-tails have a very complicated social structure and use a multitude of vocalizations to communicate everything from affection to anger. Amanda has recently started work on a new book on the subject, tentatively titled The Nature of Bats. At the time of my visit, she and French had just completed a 355-page book titled Captive Care and Medical Reference for the Rehabilitation of Insectivorous Bats [BATS, Spring 1999], in addition to writing a paper recently published in the Southwestern Naturalist.

I wish I could have stayed all year to help Amanda with the bats. Since learning about bats and joining BCI, I have dreamed of a life aiding the plight of bats (though I envision a schedule a bit less demanding than Amanda’s). Upon leaving, I asked her how she keeps up the exhausting pace. Her reply was simple: “I do it for the love of Sunshine.”

Tiffany Keller is a BCI member, bat rehabilitator, and freelance writer and photographer. She is a graduate of Marylhurst University in Oregon and is pursuing a career involving bats.

Bat Conservation International does not condone keeping bats as pets. Bat World Sanctuary and Educational Center is a licensed facility, and Amanda Lollar is a permitted wildlife rehabilitator.

Bat World in Mineral Wells (about two hours west of Dallas) is open for scheduled tours from September through June. Tours are held on the second Saturday and the third Sunday of the month. Advance reservations are required, preferably a week ahead: (940) 325-3404. Adults $8.00, children $4.00, seniors $6.00, under 3 free. The facility closes completely during July and August to care for orphaned and injured bats. For more information, visit www.batworld.org or write to: Bat World Sanctuary, 217 N. Oak, Mineral Wells, TX 76067. 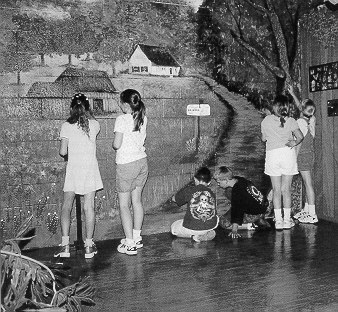 Above: Visiting students search for bats hidden in a mural in the lobby of Bat World. The boys on the floor are looking at a pallid bat snatching a scorpion off the road, while the girls are spotting bats in various roosts. 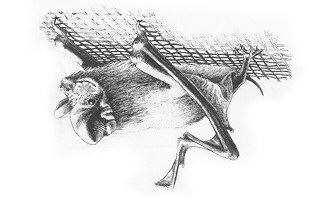 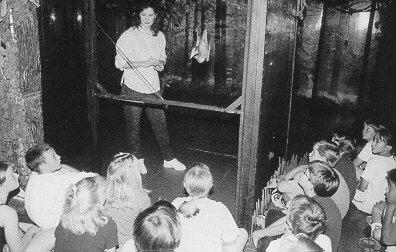 From inside the fruit bat flight cage, Amanda Lollar answers questions for a school group while Bucko the straw-colored flying fox waits for a treat.

On the way to the fruit bat cage, visitors walk through an artificial cave in which Lollar has placed a two-way mirror that shows the bats under infrared light. 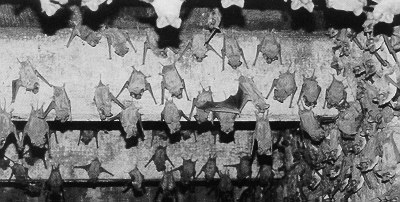 A maternity colony of Mexican free-tailed bats roost in safety at Amanda Lollar’s “Wild Sanctuary,” the historic building (inset) she purchased to protect its resident bats. The building is dedicated in memory of Lollar’s mother, who helped care for the first orphans found there. 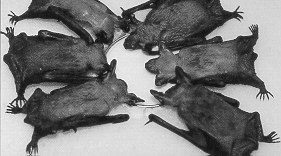 Six big brown bat pups lap up formula at Bat World. As with all efforts required for bat care, this feeding regimen is more work than it may appear. To make the environment just right for the sensitive newborns, the formula must be warmed and the bowl and bats placed on a heating pad covered with cloth. 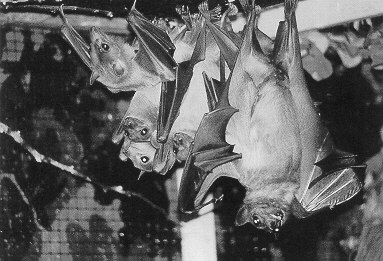 Bucko the straw-colored flying fox (front) likes to hang out with the Egyptian fruit bats, earning this group the nickname “Bucko and the Egyptians.” Here Bucko shows his characteristic sociability, which has made him Bat World’s primary public relations bat. Visitors are taught to “Look but don’t touch” bats, here or in the wild.