Although Britain has exemplary bat protection laws, it’s up to a network of dedicated volunteers to provide the skills and enthusiasm that ensure the bats’ survival . . .

It was the fourth and final week in the third and final year of the 1993-95 Lesser Horseshoe Bat Summer Roost Monitoring in Wales. A late June sun was sinking into the Irish Sea as Huw, Aled, Peter, Sarah, and I–all Gwynedd Bat Group members–met at Brynygwin Isaf, a stone mansion near the historic market town of Dolgellau.

Within an hour, we had counted nearly 200 lesser horseshoe bats (Rhinolophus hipposideros) emerging from this long-established summer maternity roost. We completed our notations on wind, precipitation, cloud cover, time, temperature, and the number of bats emerging from each exit. The following evening, Sarah and I took up the count again at an abandoned Wesleyan chapel near Arthog. When we arrived at dusk, about 80 lesser horseshoe bats were beginning to fly high above the dusty pews, silent organ, and empty pulpit. As they emerged from an open window into the surrounding woodland, their melodic echolocating calls fed directly into our bat detectors and serenaded us as we counted.

At the end of four weeks of surveying that summer, the Gwynedd Bat Group had counted more than 1,800 of the endangered lesser horseshoe bats. This was not an insignificant number, as there are only an estimated 7,000 in all of Wales and about twice that many in the entire United Kingdom (U.K.).

Although experts disagree about the interpretation of existing statistics, there is general agreement that British bat populations are in decline. The mouse-eared bat (Myotis myotis) is now extinct in Britain, and the greater horseshoe bat (Rhinolophus ferrumequinum) has decreased in range and numbers. A recent study, the 17th National Bat Colony Survey of 1993-94 conducted by the Robert Stebbings Consultancy, showed a decrease in bats counted, which are mainly pipistrelles (Pipistrellus pipistrellus), of about 13 percent from the previous year and an overall decrease of 70 percent from 1978 to 1992.

Fortunately, in 1981 the U.K. began measures to halt the decline by passing the Wildlife and Countryside Act, which protects all bat species and their roosts. Because of the Act, the needs of bats must be appraised before anyone disturbs a known roost, even if the roost is in their own home. A directive from the European Union pushed the U.K. one step further in 1992 by requiring that member countries monitor protected species. That is why you find us, the voluntary bat workers of Wales, lurking in the late evening shadows of castles, barns, and vicarages, with fingers poised to activate our counters as soon as the warbling, plum-sized lesser horseshoe bats begin to emerge.

Across the British Isles, members of some 90 different bat groups are engaged in similar tasks, helping the regional statutory nature conservation organizations carry out the law and learn as much as possible about our nation’s bats. Bat group volunteers conduct surveys of schools, churches, hospitals, and canals. We prowl beneath bridges and at proposed reservoir and highway-bypass sites. We survey for bat roosts and feeding areas in forests and sometimes at individual trees scheduled to be cut. We also conduct winter hibernation site surveys in mines and caves. If a survey reveals the presence of bats roosting, foraging, or hibernating at any of these sites, the interest of the bats must, by law, be taken into consideration before any proposed alterations take place.

Bat workers work directly with bats, too. Because Britain has been free of rabies for 75 years, we can handle bats, even injured ones, without fear. Sometimes we have to remove bats, such as those found impeding the functioning of a window blind or the mechanical action of a church-tower clock. Unfortunately, we also have had to remove them from fishing hooks, barbed wire prongs, nails, and cactus spikes. If a bat is injured, a bat group member will work with a veterinarian to determine the best course of action: nursing, rehabilitation, or euthanasia. In addition, we attempt to reunite wandering or misplaced pups with their mothers, and we often relocate bats found in unlikely places–a woman’s handbag, a child’s toy box, and a returning vacationer’s suitcase. (British Airways was willing to fly the bat back to Cyprus. Cyprus refused its readmission.)

Education is yet another task we undertake. Bat group members distribute literature and give advice at museum exhibitions, science festivals, zoos, and fairs. We guide people, including the visually impaired, on bat walks at dawn and dusk, sometimes combining the walks with games and a barbecue. We speak in classrooms, at garden club meetings, and at regional wildlife trusts. In addition, we teach courses and participate in seminars with police officers, park wardens, tree surgeons, representatives of building and wood treatment companies, county and district planners, highway department personnel, agriculturists, and foresters.

Bat group workers also educate each other. Through the support of the Bat Conservation Trust (BCT), a national, fully constituted, non-governmental organization, we receive a variety of materials and can participate in training, meetings, and conferences. A series of courses allows licensed bat workers to become trainers, and the trainers, in turn, can teach group members who want to qualify for a roost visitor license. This privilege allows them to enter a known bat roost and handle bats as required for identification under the protective laws.

Bat-troubled homeowners often call for the assistance of these "roost visitors" by requesting a "premise and loft inspection." The sure-footed volunteer then meticulously explores every recess of the loft, looking for signs of bat habitation. In some architecturally tortuous situations, this must be done without grasping pipes or electrical wires, and without making a surprise entry into the homeowner’s living space by inadvertently stepping between the beams. The most common and desired result of an inspection is that the homeowner will accept and even welcome bat boarders. If not, the local statutory conservation organization must intervene.

Meanwhile, many bat workers are encouraging bats to move into houses and other existing structures by modifying the buildings for use as hibernation roosts. Bats have been invited to overwinter in the cellars of stately homes, boiler houses, and Victorian ice houses. They are welcomed into Tudor sewers, lime kilns, and canal lock houses, as well as World War II pill boxes, bunkers, and air raid shelters. Bat workers continually construct bat boxes (bat houses) as well, using both traditional and innovative designs including concrete models and assorted American styles. Bat boxes are especially valuable in the crowded non-native conifer plantations that have insect populations but lack natural roost sites for bats.

Although bat workers will continue to seek out, register, and monitor bat roosts and hibernation sites, our attention is now being focused more intently on foraging habitat, a largely unknown and highly crucial component of bat activity. After our carefully counted lesser horseshoe bats leave their roosts each evening, where do they go? Where are the feeding grounds we can and must protect?

Bat groups and the BCT have responded to this growing need for assessment with the introduction of bat detector workshops throughout the U.K. One such workshop was organized by the Clwyd Bat Group in July of 1995. Bat group members and wildlife trust interns from Wales, northwest England, and London gathered at a youth hostel in northeast Wales for two nights of surveying and two afternoons of instruction by BCT scientific officer Colin Catto and Aly Hooijenga, the Gwynedd Bat Group secretary. From dusk until midnight we looked for emerging bats, commuting paths, and foraging areas. Partially revived with sandwiches and strong tea, we used the information we had obtained to plot our strategy for locating roosts at daybreak. Back in the field at 2:00 a.m., we tramped up and down river banks, sat sentinel on limestone cliffs, leaped into murky streams to examine inviting niches in bridges and tree roots, and padded softly and swiftly through sleeping neighborhoods. In the end, we had exhaustively demonstrated the difficulties of identifying species accurately with bat detectors and of successfully defining foraging areas and roost sites. We have much work for the future.

During this same month, the United Kingdom hosted the first meeting of the Parties to the Agreement on the Conservation of Bats in Europe. Attendees included administrative and scientific advisors from the Czech Republic, Denmark, Germany, Hungary, Luxembourg, the Netherlands, Norway, Sweden, and the United Kingdom. There were also representatives from Range States, those countries that exercise jurisdiction over the flight paths of migrating bats, and from governmental and non-governmental bodies such as the BCT and the IUCN (International Union for the Conservation of Nature and Natural Resources). Results of the meeting were significant. The parties established a permanent administrative office in Bonn, Germany, and set forth an aggressive action plan for 1995-1998. The plan gives guidelines for identification and protection of roosts and foraging areas and for conducting population surveys and monitoring. It also addresses pesticides, education, and the improvement of human attitudes towards bats.

This was the first time in history that a standard has been set for the conservation of bats in Europe, and Britain’s bat group workers will soon have a chance to help. The British government has contracted with the BCT to conduct a five-year monitoring program of selected British bat species, with hopes that the methodology created for this survey will become a model for other countries.

We will have arduous nights in the field. I am already looking forward to some "evenings off" counting lesser horseshoe bats at Penmaenuchaf Hall, a luxurious country hotel set in 21 acres of woodland and gardens. No clouds of voracious insects will blur vision or muddle concentration there in the former summer residence of a wealthy Victorian cotton magnate. I’ll sit in an armchair amidst tasteful furnishings and objets d’art, including antique prints of long-eared, Barbastelle, and horseshoe bats. As I watch through a window, more than 100 lesser horseshoe bats will flutter from a designer bat dormer in the slate roof opposite me, then plummet down, maneuver between stone walls, and vanish into the forest.

I hope we’ll also hear them on one of the more demanding nights this year when Gwynedd Bat Group workers will explore the surrounding woodlands gathering data to protect the bats’ roosts and foraging habitats.

Mary Louise Alley-Crosby has been a BCI member since 1988 and was a volunteer on our 1989 bat-cactus research project. A retired court reporter from Grays Harbor County, Washington, she has been a resident in Dolgellau, Gwynedd, North Wales, and a member of the Gwynedd Bat Group and the Bat Conservation Trust since October of 1993. 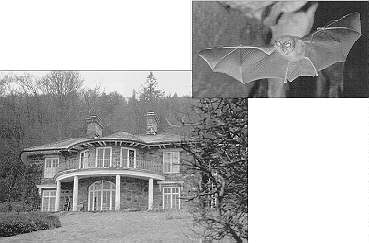 Above left: Brynygwin Isaf, built in 1802, is home to lesser horseshoe bats and pipistrelles. 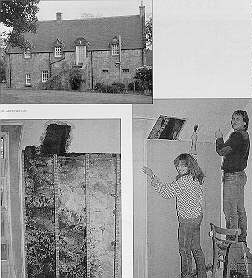 This early 19th century house is a long-standing haven for pipistrelle bats. The owners wanted to preserve the bat roost but rid themselves of the guano, which, over many decades, had filtered down the wall cavity on two floors. Members of the Fife Bat Group removed the guano and remodelled the roost to prevent future problems. The bats continue to use the roost. 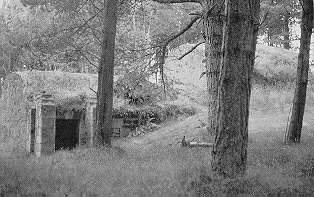 During the 18th and 19th centuries, icehouses like this one were used to store ice removed from lakes in the winter for domestic use in the summer. Many are now home to hibernating bats and are protected by gates. 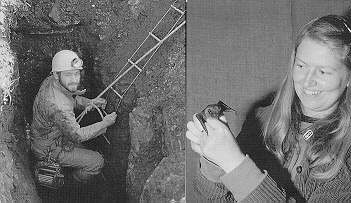 Two of the varied activities of bat group members: On left, Chris Jowett, a Gwynedd Bat Group member, descends into Penrhyn Mine for a hibernaculum survey. On right, Andrea Durn, a Gloucestershire Bat Group member, works with the group’s public relations representative, an injured noctule bat.