Chenango Valley State Park in south central New York is ideal bat habitat. Bordered by a river and surrounded by forest and farmland, the park is more than half forested and includes two lakes, marshy areas, and a golf course. About 400,000 people visit each year.

A few years ago a professional pest control technician requested my assistance in controlling bats that were roosting in public buildings in the park. I found mostly Little brown bats (Myotis lucifugus) and some Big brown bats (Eptesicus fuscus) roosting in picnic pavilions and other buildings. Many bats were living above the ridge beam of a large open-sided pavilion which was often used by several hundred people at a time in the evening. Bats flew in and out as droppings and urine rained down on the picnic tables and visitors below.

The pest control firm and park staff had failed to evict the bats, though various means had been tried. I knew that the only permanent solution would require thorough batproofing. The park staff then raised the question of where the bats would go when excluded. Since I wanted to do something that would be sensitive to both the bats' needs and my responsibilities as a public health specialist, I was happy with their decision to provide alternative roosts where the bats would no longer be a nuisance. After extensive discussions with many sources, including BCI, the park chose a design that would support several hundred bats or more each. The final plans were modified from a successful design originally developed by the Missouri Department of Natural Resources.

In the spring of 1988 five large bat houses were placed in different parts of the park where they could be easily monitored by park personnel. All sites were near buildings that were being batproofed. The bat houses were oriented to receive early morning sunlight, sheltered from the wind, and within a few hundred yards of water.

It was hoped that the bats would utilize their new roosts without further human intervention, but by early June bats had not yet used the new houses. Pockets of roosting bats were still found in partially batproofed buildings and other niches yet to be batproofed.

I decided to experiment and try "seeding" the bat houses to initiate usage. Ten Little brown bats and nine Big browns were captured for one house and 45 Little browns for a second. The bottom of each bat house was covered with half inch mesh polypropolene netting, leaving an entrance sleeve where the captured bats were inserted. The sleeve was then closed to prevent escape, and the bats were kept inside for 24 hours. They were allowed to become familiar with their new roos for a full night and day. At dusk the following evening, the netting was removed. To everyone's delight, the bats returned. By late July, bats were regularly using both seeded houses as well as a third which had not been seeded.

The real test of this project will be if bats return to the bat houses this year. If all goes well, we will then attempt to move the bat houses—with bats inside—to park areas away from human traffic and with even better foraging grounds for them.

Development of a successful method to relocate bats into alternative roosts after they have been evicted from buildings could be an important step in resolving conflicts. People can then enjoy the benefits of having bats around without sharing their dwellings with large numbers of them. And bats would be free to do what they do best—eat insects. 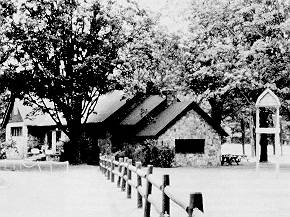 A Missouri-style bat house was placed near a golf clubhouse as batproofing work began in the building. The evicted bats moved into this house of their own accord, but other were "seeded." PHOTO BY STEPHEN C. FRANTZ