Bat houses prove to be welcome shelter for bats in an area with few natural roosts . .

To forest-dwelling bats, many commercial forests must seem like a cruel joke played by humans. The immature commercial trees lack the types of shelter bats expect from older trees, such as cracks, loose bark, woodpecker holes, and other deep cavities. Few trees are left to reach old age, and dead and dying trees are removed, destroying the diversity of habitat that natural forests develop.

In commercial forests of the United Kingdom, most trees are non-native conifers that have almost no potential roosts, and all are relatively young–planted this century. Fortunately, in recent years, management policies in the U.K. have become more sympathetic to wildlife, and thus natural roosts should become more abundant in the future. One way of helping bats in the meantime has been to provide them with an alternative.

Over the last two decades, many thousands of bat boxes–similar to bat houses used in the United States, but smaller–have been placed in forests across England. Many of our 16 native bat species have roosted and even reared young in them. However, little has been done to assess their real conservation and scientific value. Kirsty Park and I at the University of Leeds (with the help of several generations of students) have been collaborating with the Forestry Commission–the British equivalent of the U.S. Forest Service–to try to change this situation.

Although our primary goal was to document the numbers and species of bats using the boxes, why they use them, and when, it became obvious that bat boxes offer opportunities for additional research. In essence, the boxes provide a window–an ideal outdoor laboratory–through which we can study the behavior and ecology of bats.

In the North Yorkshire Moors National Park, more than 300 boxes attached to trees have been monitored for the last 12 years by the Forestry Commission’s Chief Ranger, Charles Critchley, and more recently, by our team. Bats began using the boxes within weeks of their placement in 1985. Now more than 90 percent of the boxes have been used at some time by bats, including all but one of our local species. Most of our data, however, come from about 400 common pipistrelles (Pipistrellus pipistrellus). To track individuals, we band all of the bats (wing bands don’t harm them if well-made and carefully attached). Many of these tiny, thumb-sized (four to six gram) bats have been caught numerous times, and some are eight or more years old.

The boxes are concentrated in ten sites, from one to eleven miles (2-17 km) apart, and the bats very rarely move between sites. In the spring, the forest boxes are filled predominantly with male pipistrelles, but females arrive in mid- and late summer after their young are weaned. The males then begin the hard work of courtship, each using a distinctive songflight to attract females or chase off rivals. The song is a three- to four-syllable chirp, low enough to be heard without a bat detector and repeated frequently as the bat flies back and forth near its roost. We suspect the males have a clever strategy for choosing their mating roosts: they select the boxes closest to the routes used by females coming in from nearby colonies. Each male may eventually attract a harem of up to 10 females to his box, which he must then work to defend from rivals. Although many male-female associations appear transient, a significant number of females have been found with the same male throughout the autumn mating season. Some have even been found with the same male in subsequent years.

In Dorset, on England’s south coast, an even larger project has been running for 20 years. About 2,000 bats have been banded, predominantly of three species: common pipistrelles, brown long-eared bats (Plecotus auritus), and Natterer’s bats (Myotis nattereri).

The pipistrelles use the boxes as they do in northern Yorkshire. Late in the summer each year, a resident male population attracts a transient female population. In contrast, there are almost equal numbers of male and female long-eared and Natterer’s bats throughout the summer in Dorset. During the mating season, both species form groups of up to 20 females and 10 males. In addition, female long-eared and Natterer’s bats form stable groups of individuals, unlike pipistrelles.

We think these differences in mating and social behavior are ultimately determined by the different foraging styles of these bats. Long-eared and Natterer’s bats are both "gleaners" as well as "aerial hawkers"; they take large numbers of stationary moths from foliage or other surfaces, and they also hunt their prey in flight. The shape of their wings, their style of flight, and the structure of their echolocation calls are suited to this type of feeding. Because large prey are an unpredictable food source, it pays for bats that feed in this way to swap information, and perhaps even to forage together. Perhaps this need explains the stability of the social groups. Pipistrelles, on the other hand, are more generalist feeders, primarily hunting small and abundant insects in flight. With a predictable food supply, they have little to gain from forming groups or sharing information–which also accounts for the rather unstable composition of their female groups.

These differences may explain why the male pipistrelles defend their bat box mating roosts, while long-eared bats appear to defend the females themselves. Unstable and nomadic groups of female pipistrelles, apparently, are not a good investment, but a good mating roost may be. We have a lot to do before we can confirm these ideas, and bat boxes will play an important role in this work.

Interestingly, long-eared and Natterer’s bats will rear young in the boxes, but pipistrelles do not. We believe this behavior might also be attributable, at least in part, to differences in foraging styles (a theory proposed in a study from the Canadian Rocky Mountains by Robert Barclay). These two "gleaner" species can pick insects from foliage and other surfaces at any time throughout the night. Thus there is plenty to eat at all times for their hungry, pregnant (or nursing) females, and the females can remain in the woodland throughout the season, give birth, and provide for their young. In contrast, pipistrelles must catch most of their food at the specific times of night when aerial insects are abundant. Is it an inadequate food supply, or the need to form large nursery colonies, which prevents pipistrelles from rearing their young in these small bat boxes? As yet, we do not know, but last year we erected a number of large bat houses, built to BCI specifications, to see if pipistrelles (and perhaps other species) will adopt them as nursery roosts.

All of this work is ongoing, and new projects are being started. Boxes with thick timber walls have been built to see if bats will use them for hibernation, and at one of our Yorkshire sites, the Forestry Commission has built an artificial hibernaculum simulating a small cave system. It has already been adopted by some specialist cave spiders; perhaps bats will move in next year.

Bat boxes have given researchers the opportunity to study aspects of behavior previously closed to us, and have recently helped to confirm an important discovery. In 1993, Gareth Jones of Bristol University determined that there were actually two types of the common pipistrelle in Europe, with very different echolocation calls, and he suggested that they might be two species. We immediately saw the potential of our bat boxes: mating groups should be either one type or the other, but never mixed. After recording bats from many different harems, we concluded that the two types do not roost together in the mating season. We sent tiny biopsy samples of wing membrane (the wing heals rapidly) to Gareth and his colleagues, and DNA analysis supported the idea that a new species of bat had been identified.

Clearly, bat boxes are fulfilling many useful roles. They are a valuable field laboratory for bat research, much of it conservation oriented. They also are an important public relations vehicle, attracting the attention of the community and the media. Finally, they are heavily used by bats, often at critical stages in their annual cycle, and therefore may have an important conservation role.

John D. Altringham is the author of Bats: Biology and Behaviour. A zoologist at the University of Leeds in England, he studies bats and other animals. 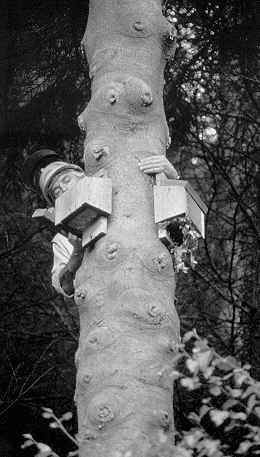 Steve Palmer, one of the Forestry Commission rangers, checks on two tree-mounted bat boxes. The boxes also attract many other animals, particularly birds. The remains of a wasps’ nest can be seen hanging from the bottom of the box on the right. 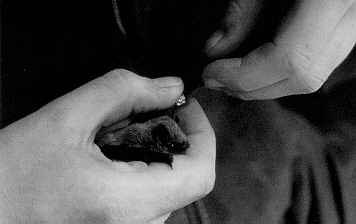 A tiny wing band is carefully placed on a common pipistrelle. About 400 pipistrelles have been banded in the North Yorkshire Moors National Park. With the bands as identifiers, researchers can track the behavior of specific individuals, such as which bats roost together at different times. 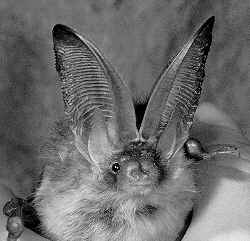 A 20-year bat box project in Dorset has revealed that brown long-eared bats (pictured) and Natterer’s bats will rear their young in bat boxes, but pipistrelles will not. 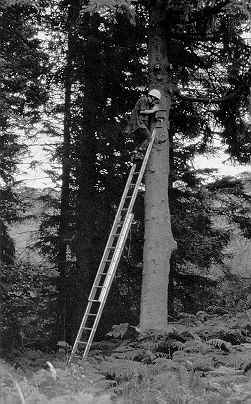 Researcher Kirsty Park inspects bat boxes at one of the many Yorkshire study sites. 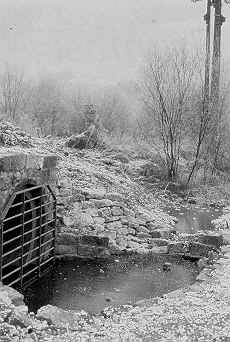 In the North Yorkshire Moors, the Forestry Commission has constructed an artificial hibernation cave in addition to providing bat houses on trees (background).