Can bats be persuaded to move from an attic or some other place into a bat house? This is a common question and one that we cannot yet answer with certainty. While there have been failures, there have also been some notable successes. The following two examples suggest that, with additional research, we might be able to achieve more consistent results.

Lisa Williams’ well–documented bat house study in collaboration with the Pennsylvania Game Commission is based entirely on excluding bats from buildings and providing bat houses as alternative roosts. Sealing the bats’ entry points to attics has been completed at six of her current study sites. Bats have moved into bat houses at five of the sites where exclusion is complete; only one successfully excluded colony has not moved into the waiting bat houses. In most cases, the bat houses were erected before exclusion was begun, and in three instances, bats began moving in before exclusion was complete. At all successful sites, the entire colony relocated to the bat houses once the exclusion work was finished. The species at these sites are mostly little brown bats.

The unusual success of Rollie Huffman in Nebraska corroborates Williams’ experience of some colonies moving into bat houses prior to exclusion work. Over the past 20 years the older commercial buildings have been torn down in the town where Huffman lives, displacing many bats that had long made their homes there. Although the school was also old, it had never had a problem with bats. But as urban renewal claimed their roosts, bats gradually began moving into the school attic. As many as 2,000 may have been present when the school decided to take action.

Huffman, who had been experimenting with bat houses, offered to erect two of his biggest designs directly adjacent to the bats’ major entry point. Enlisting the help of the local power company to put in the 35-foot poles so that his houses would be as high as where the bats were accustomed to living, Huffman erected the houses late in May of last year. Sometime in August bats began moving in. When the school year started, no more bats were reported flying in the hallways, a common occurrence the previous year. Large amounts of fresh guano directly beneath the bat houses indicate that a good proportion of the colony has moved into the new bat houses. Exclusion work was deemed unnecessary.

Since the school had never had a nuisance problem before the bats were displaced, this suggests that it may have been used merely as a roost of last resort; it was the only old building left in the vicinity. When offered something more suitable— Huffman’s bat houses— bats took the opportunity. Huffman reported this winter that he suspects some of the bats may even have overwintered in the bat houses; following warm days, he has found fresh guano below. 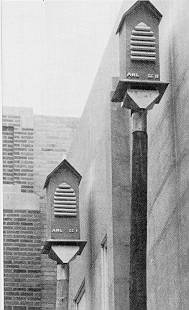 Rollie Huffman got the inspiration for his “Gothic City” bat houses from European castles and manors, many of which he knew were home to bats. These large bat houses were mounted on 35-foot poles adjacent to the bats’ entry point in a school; the bats found the bat houses more attractive than the attic and soon moved in.