The Metro Toronto Zoo has found a formula for success in encouraging people to share their backyards with bats . . .

The zoo of the nineties is no longer just a place to exhibit animals. Zoos increasingly are playing a major role in conserving habitat and species in the wild, and they are a significant force in conservation education, both at the international and local level. The bat conservation and bat box program at the Metro Toronto Zoo in Ontario, Canada, is a good example of how zoos can work with the public.

In response to heightened interest in bats, the Zoo launched a bat education program in 1989, providing people with the opportunity to meet the Zoo’s bats up close and to learn more about them and other bats. The basic program soon expanded to encompass local species and bat boxes after I attended a Federation of Ontario Cottagers’ Association meeting in the fall of 1990. (Many urban residents of Ontario and the northeastern United States have summer cottages in northern Ontario, which is where many bats also spend their summers.)

The cottagers expressed a strong desire to maintain their summer retreats in a “wild” state and to learn to live with wildlife, including bats. Here, then, was our audience for a bat box program. Most of what is known about bat box occupation in Canada is anecdotal. The Zoo wanted a way to follow up and obtain documentation of bat preferences and to learn more about which designs best attract bats.

An article appeared a few months later in the Toronto-based magazine, Cottage Life, listing Metro Toronto Zoo and York University as sources of information about building bat boxes. Both institutions were flooded with requests, primarily from Ontario cottagers. The Zoo sent out several different bat box plans, directions on placement, and information about the natural history of bats. We also encouraged people to be inventive and try their own creations.

The bat box program has been extremely successful as a way to get people involved in bat conservation, and public schools have become an integral part of this process. With assistance from the Zoo, one school’s junior naturalist club held a bird and bat box building day in March 1991, installing the boxes early that same spring. The students numbered seven bat boxes and have monitored them over the past two summers. The boxes, all a simple, single-chamber wedge design, are as yet unused, but one factor may be that they are located near an old vacant house with a sizeable big brown bat (Eptesicus fuscus) colony in the attic, possibly precluding the need for additional roost space. Regardless of occupancy success, bat boxes are an excellent way to introduce young children to bat conservation, and as we learn more, success will improve.

Adult response to the program has also been enthusiastic, and we hear from some participants on a regular basis. One cottager from Parry Sound, a community on the eastern shores of Lake Huron, reported an unusual success soon after the program was officially underway. When he renovated his porch, he knew that he would disturb his resident bat colony and so looked for roost alternatives. Taking two 42-inch-long cardboard tubes, which had once been used as spools, he bisected the center of each with a snug-fitting 5/8-inch-thick piece of rough-cut wood for the bats to cling to, leaving space at the bottom. Each tube had an interior diameter of 3-1/4 inches with 1/4-inch thick walls. He recapped the ends with the plastic spokes, each of which had a 1-inch center hole, and hung the tubes six inches apart adjacent to the bat entry on his porch.

To his surprise, the bats moved into the tubes when construction began, entering through the 1-inch hole. He was so excited that he drove to the Zoo (a three-hour drive) so he could tell me the news and bring a similar tube to show me how it worked. The bats returned to the tubes the following spring, but one group was driven out by wasps and moved under the overhang on the newly renovated porch. The other tube remained in use for the second season, and he looks forward to welcoming them back this year as well.

Another story illustrates the progress we have made in helping to change attitudes toward bats. Recently I received a phone call from a distraught couple who were moving from their century-old home. They had a large nursery colony of bats in their old home. No, they did not want to evict them; they wanted to know how they could take their bats with them to their new home!

The Metro Toronto Zoo bat box program will coordinate its first formal data on occupation this fall. The people who built bat houses will have had two to three seasons of experience. Working with BCI, the Zoo will send a survey to about 1,000 participants in the program and correlate the results with BCI’s North American Bat House Research Project. We are particularly interested in information on evicted bats that are offered alternative roosts. Survey results will be documented with follow-up photographs and possibly video footage. Based on our initial findings, field studies will be conducted to learn more about bat roosting preferences, and new bat box designs will be tried.

We are also planning a cooperative bat box program in French and English with the education department at the Biodome in Montreal, Quebec. The Biodome is a large educational facility displaying four different eco-habitats, one of which incorporates a bat exhibit. The Quebec Cottagers’ Association has expressed interest in working with us on a bat box project as well, and we hope to gain additional support in western provinces.

Bat boxes may or may not be the answer to bat preservation, but our program has dramatically increased public awareness of the benefits of bats, and that is the genesis of bat conservation. We look forward to continued working relationships with Bat Conservation International, the Federation of Ontario Cottagers’ Association, York University, the Royal Ontario Museum, and, of course, the residents of Ontario, who have demonstrated such a willingness to live with wildlife. 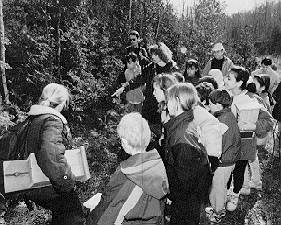 The author (center) points out something interesting to a young naturalist’s club on the way to erect their bat houses. Under supervision from the Metro Toronto Zoo, the youngsters built and numbered seven bat houses, which they regularly monitor for use. Such programs have proved to be an excellent way to get children involved in bat conservation.