Amanda Lollar and her bat houses are educating an entire community . . .

Six years ago, Amanda Lollar found an injured Mexican free–tailed bat (Tadarida brasiliensis) lying on the sidewalk in Mineral Wells, Texas, and the experience changed her life. She nursed it back to health, wrote a book about the experience, joined Bat Conservation International, and began enthusiastically educating people about bats.

In the spring of 1993, she began her most successful educational effort yet when she convinced leading businesses in town to put up bat houses. As word of her work with bats spread in the small town, business owners began to turn to her to solve their problems with free-tailed bats in their buildings. They complained that the bats’ odors and unexpected appearances were hard on business. The owner of the funeral home was especially distressed; bats flying around coffins did not create a very comforting atmosphere for visitors, he explained.

They struck a deal: She would help if each business agreed to provide an alternate roost for the evicted bats in the form of a bat house hung close to where bats entered their buildings. No one wanted to be first, but as soon as several of the more prominent businesses erected their bat houses, others followed.

Amanda’s father, Luther, who had agreed to build the houses, was soon overwhelmed with requests, so they enlisted the Mineral Wells High School woodworking class to help. The students were enthusiastic about the project, and between Luther and the class, they turned out 21 houses. The houses are now prominently displayed on businesses throughout town, many of which are on buildings that never had a bat problem.

Some of the bat houses blend into the building’s architecture and color and are hardly noticeable, while others incorporate bits of artwork to the bat houses along with the name of the business and company logo emblazoned across the front. People who were once upset that bats were living in their buildings now boast about how large their colonies are, and tourists wander around town in the evenings watching for bats to emerge from the bat houses.

In addition to educating a town, Amanda has contributed greatly to knowledge of bat roosting preferences in hot southern climates. Her careful observations are helping to provide BCI’s North American Bat House Research Project with some important clues. Fifteen (71%) of her first 21 bat houses were occupied last summer by colonies ranging in size from 5 to 250 bats each, averaging about 80. She suspects that numbers are substantially higher this spring; most of the houses will hold up to 500 bats, a few over a thousand. The first four houses, put up adjacent to where colonies were excluded in the spring of 1993, were occupied by the next morning. Ten of her occupied houses were chosen without exclusion.

Insight into Mexican free-tailed bat needs can be gained from close examination of Amanda’s five bat houses that failed to attract occupants. Three are painted white and face north, receiving minimal sun. Current data indicate that even southern bats like four to six hours of daily sun on their houses, probably explaining failure. The only house mounted on a tin-sided building also failed, perhaps either because it lacked the heat-sink effect of stone or because bats had difficulty landing. The fifth unoccupied house is located within a few feet of a bright and noisy street light. However, about 40 feet away from the light, on the same side of the same building, another identical and similarly mounted house is successful.

With so many newfound bat enthusiasts to help, Amanda intends to expand her bat house project. Additionally, she has founded the nonprofit Beneficial Animal Teaching Society and has a goal of building a local bat education center. Her presentations, using BCI audiovisual programs and other materials, are popular throughout her community of 14,000 people. Now she will focus primarily on local schools, involving students in her bat house research. Clearly, a community where bats outnumber people has a good reason to learn about bats!

(Amanda Lollar’s book, The Bat in My Pocket, is available from BCI’s catalogue.) 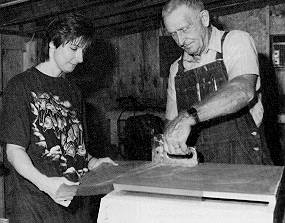 Amanda Lollar’s enthusiasm for bats has changed the minds of many people. Her father, Luther, helps by building the bat houses that form the basis of her educational mission. The project is also revealing important clues into the roosting needs of bats in warm climates.