An experienced pest control operator shows how bat problems can be turned into benefits . . .

By Kevin Cherry and Sandra Eichelberger

IT WAS LIKE A SCENE from an old horror movie. A burly police officer cowered with a tennis racket in hand while the petite homeowner fearfully peered over his shoulder. A big brown bat (Eptesicus fuscus) flew from room to room, dodging the frantic racket swings of the officer in pursuit. As absurd as this scenario appeared, it was nothing new for me–just a typical day’s work for my company, Trutech, a nuisance animal removal firm that I manage in Atlanta, Georgia. Fortunately, I arrived in time to prevent damage to bat, people, or furniture–and I easily removed the frightened bat from the living room curtains where it had landed.

In the past, the pest control industry has done little to alleviate the fears of homeowners or to develop humane solutions for bat removal. Poisons, repellents, and death have been the legacy of the exterminator. But education is slowly changing that story. With training from BCI, Trutech has been offering humane bat removal services to our customers for five years.

Although the homeowner in this particular instance had encountered only one bat, there were actually more than 50 big brown bats roosting in her chimney, as is often the case. A chink in the bricks’ mortar allowed them to crawl in through the fireplace; they apparently had been living there for years.

The lady of the house seemed apprehensive but curious as I explained the good side of bats. She was squeamish, as many homeowners are, about sharing her space with any small, wild animal. I talked about how bats provide insect control, but I didn’t really get her attention until I mentioned that bat guano could do wonders as a fertilizer for her flowers; she happened to lead a senior citizens’ garden club.

My solution to bat problems is always "exclusion," which means that I cover the bats’ exit hole with a "bat valve"–a flap that allows them to exit but not enter. In this instance, I installed the bat valve on the chimney, then took care to screen all vents and close off any other possible entry points. Once the homeowner had approved the installation of a bat house, I put one up just beside and above the bats’ exit point in the chimney. Several neighborhood children came to watch me work. Everyone was looking forward to seeing the bats emerge for the night, and we were all wondering if they would use the new bat house. Of the clients contacting my firm about nuisance bats, over 75 percent can be persuaded to allow a bat house to be placed during an exclusion. Most of these homeowners provide their own. For those who don’t, I offer either houses I’ve constructed or ones donated by a local pest control supplies distributor. I install the house as close to the original roosting area as possible, trying to duplicate conditions of sun and shadow.

When I returned to this particular home at sundown, a crowd of neighbors had gathered to watch the bats come out to feed. Several families had brought picnic dinners, and children clustered around me, full of questions. While we waited, I talked to people about the benefits of bats, installing bat houses, and joining BCI’s North American Bat House Research Project. I also received an invitation to speak at the local garden club.

As darkness fell, I used a spotlight to illuminate the bat valve while the bats were exiting. Flurries of bats flew overhead then out to feed on moths near the street lights, while a few immediately explored the new bat house. I have found that placing a bat house close to the old exit point and smearing the interior with fresh guano often shortens the time required for bats to accept the new roost site.

The next day I found about 17 bats using the new bat house, with all but two crowding into the uppermost crannies. Several smaller juveniles had squeezed into the crevices between the bat house and the lapboard siding.

This past winter I spoke again to the homeowner, now a satisfied customer. She reported that many bats were regularly using her bat house last summer, and that she was planning to place a much larger maternity house on the adjacent wall in the spring to see if the bats would prefer a higher temperature. I was happy to see that the bat house had succeeded in changing her resident bat colony from a problem into a source of knowledge and pride.

Patience and diplomacy are my main assets in resolving homeowners’ initial concerns about humane bat control. Most often clients call me after being referred by a local pest control operator. At first they are apprehensive, usually because they’re afraid of rabies. However, a little information goes a long way; once they understand the importance of bats to the environment, the truth about rabies, and the effectiveness of humane exclusion methods, most people change their minds about killing the bats. [See "Living Safely with Bats," BATS, Winter 1995, page 14.]

On my first visit to a site, I conduct a thorough inspection to identify the bats’ entry points, the species, and the possible presence of nursing young. More than 98 percent of the bats excluded in Georgia are big brown bats roosting in attics. To avoid disturbing newborn bats, I recommend no exclusions be done in the months of June or July. However, bat houses can be installed during these months, and preventive work can be done year-round.

After all exits are identified, I install a bat valve adapted to local conditions. I construct these valves from polyethelene sheeting, although netting, screen, or other materials can be used. All other possible entry areas must be screened, caulked, or covered at this time. Squirrels and other wildlife can reopen areas that bats cannot, so I repair as needed. In five years of using these methods, I have placed more than 300 small bat houses during exclusions. Of these, more than 60 percent have become occupied by a bat colony within one year of installation. Most were used by at least part of the colony immediately, and larger numbers moved in the following spring. According to customers, a small number of houses also seem to be used by single male big brown bats for winter hibernation. I expect even better results as methods improve. Because of the attention we devote to customer relations and education, bat houses have become a hallmark of Trutech’s service.

We also continuously work to introduce humane bat management to other pest control operators (PCOs) through the Georgia Pest Control and Georgia Trappers associations. Our efforts have led to a drastic drop in the use of poisons, sticky glue, and repellent by PCOs. Now properly licensed and trained PCOs seldom use the dangerous methods of the past. Most problems that continue to arise are caused by unregulated trappers or handymen, who may be looking for the easiest solution or may simply not know better. Although the use of illegal poisons like Rozol® or Ditrac® is very rare, cases are still reported of bats trapped in sticky repellents such as Roost No More® or Hot Foot®. Several of these repellents continue to carry labels suggesting their use on bats. Ultrasonic bat repellents, which claim to repel bats by emitting high-frequency noise, are still sold in most lawn and garden shops–despite test results from the Environmental Protection Agency and the National Pest Control Association documenting their complete ineffectiveness in bat control.

Though there is still room for improvement, the pest control industry has made substantial progress toward responsible treatment of bats. I believe that, over time, exclusion results will speak for themselves, and PCOs and homeowners alike will realize exclusion is the best possible solution for both people and bats.

BCI Founder’s Circle member Kevin Cherry is the manager of Trutech Wildlife Control Company, a pest and animal control company based in Marietta, Georgia. He has attended BCI’s bat management workshops in both Arizona and Pennsylvania, and he educates pest control operators and the public in protecting non-game wildlife in Georgia. Sandra Eichelberger is his wife. 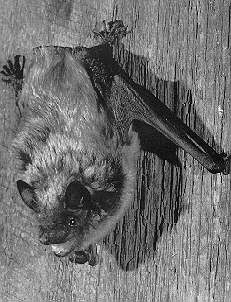 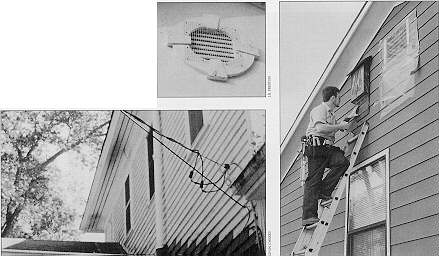 Guano stains (below, on the eaves) are one indication that a large bat colony is present in a home. After exit points have been identified and an exclusion valve has been placed on one exit (far right), screening can be placed over other exits (right) to prevent the bats from re-entering. The author often mounts a bat house next to the exit as well (far right). He reports high occupancy rates in the houses he has installed.