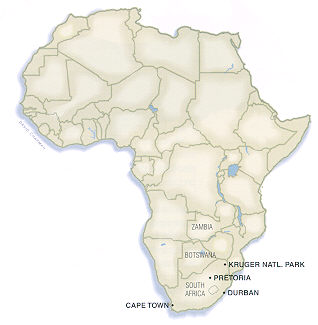 Until six years ago, bat conservation efforts in South Africa were the province of just a few dedicated scientists. In 1994 I reluctantly branched out from my usual role as a rodent systematist and agreed to assist with a television documentary on South African bats. Inspired by the ensuing flurry of media and public fascination, several fellow conservationists and I formed the Durban Bat Interest Group, followed shortly thereafter by the Gauteng Bat Interest Group, giving amateurs, for the first time, a role in bat conservation in this country.

Over the next few years, interest grew steadily, culminating in a wonderful bat festival in February of 1999. Dozens of “bat workers” (as our group members are known) came together from five provinces–Gauteng, Northwest, Eastern Cape, Western Cape, and KwaZulu-Natal–to host a week-long bat exhibition at the Sasol Science Festival in the Eastern Cape. An estimated 7,000 people, mostly school children, participated in our programs of slide shows, bat house demonstrations, and evening bat walks.

In late 1999, while planning for the year 2000 bat festival, something even more exciting happened. BCI founder and executive director Merlin Tuttle contacted us to offer his assistance on the way to his annual Founder’s Circle tour, held this year in Botswana and Zambia. From the beginning, BCI has supported our bat groups with literature, advice, moral support, and discounts on educational materials, but we knew this visit could be the most beneficial exchange between us yet. Bat workers across the country put their heads together to raise the necessary finances and organize the logistics, and with considerable assistance from Dr. Brian Whiting of Winchester Marketing, an exciting tour materialized.

The resulting “bat safari” took Tuttle from Durban to Pretoria, to some of South Africa’s most beautiful and bat-rich bushveld (savanna woodland) game reserves. At each location he was joined by bat workers, conservationists, military personnel, journalists, film producers, and the general public. To the delight and fascination of these onlookers, he captured and photographed a total of 12 species of bats during the week. Bat workers took avid mental notes on Tuttle’s so-called “finesse netting” technique in which he caught bats in locations and ways we never imagined would work. At four separate venues, Tuttle gave a slide show of bats around the world, and his photographs enthralled a wide variety of audiences, from ecotour operators to biologists and the

Tuttle also visited bat house projects and offered constructive advice to prospective bat landlords, including staff at both a military base and a prestigious safari lodge bordering Kruger National Park. The next stop, close to the park, was the small town of Komatipoort where two massive bat houses stand, constructed long ago by far-sighted authorities of the South African Railways in the hopes of attracting bats to control malaria-carrying mosquitoes. Both are dilapidated, and only one is still occupied (bats in the other were deliberately poisoned!). Local conservationists were inspired by Tuttle’s ideas of rehabilitating these structures and featuring them as tourist attractions, and plans are currently afoot to obtain funding for this ambitious project.

Apart from encouraging bat workers (both scientists and amateurs), identifying fruitful projects and areas for collaboration, and paving the way for future funding opportunities, the “Tuttle Tour” prompted positive and unprecedented media coverage of bats. Radio interviews and two high-profile articles in glossy outdoor and wildlife magazines have appeared since the visit, with several more planned for the near future. Bat workers’ telephones have not stopped buzzing!

Meanwhile, the Durban and Gauteng bat groups continue with our usual work, along with a third group, Cape BAT (Bat Action Team), which took flight in Cape Town at the start of the new year. Fearful public perceptions about bats are still prevalent in many of the different cultural groups making up our “rainbow nation,” and few of our 54 bat species have any official protection. According to the IUCN (International Union for the Conservation of Nature and Natural Resources), South Africa has 17 threatened species including two that are endemic (occuring nowhere else), and five listed as “Vulnerable.”

The large-eared free-tailed bat (Otomops martiensseni) has been the flagship species in raising public and government awareness. In South Africa, this bat is found only in the roofs of houses in the greater Durban area, where it is susceptible to homeowners’ attempts to fumigate against wood borers. Visits by bat workers have revealed 12 active roosts and a further 10 where the bats had been injured or killed.

In 1996, the Durban Bat Interest Group helped get provincial legislation passed to protect this species as an “endangered mammal.” Through press releases and letters, we have advised pest control companies and the public in the Durban area to notify us or other conservation organizations when they discover bats, and now most of them stoutly refuse to fumigate any residence that has a bat colony. This also has led to the discovery of a number of new roosts.

In the case of the endangered free-tailed bats, which are easily handled, we physically remove the bats until fumigation is complete then release them at the same location once the methyl bromide gas has dissipated. No matter what the species, we try to persuade homeowners to keep any house-roosting bats wherever possible. Sometimes, however, homeowners prefer to “exclude” the bats–to seal roost entrances to prevent re-entry.

A second species, the short-eared trident bat (Cloeotis percivali), was also granted protection under the same provincial legislation after a colony of these rare bats was discovered in inspection tunnels in the wall of a dam in northern KwaZulu-Natal in 1995. After being threatened with eradication on the basis of “hygiene,” the colony–only the second of this species known in South Africa–has been guaranteed protection.

Bat workers also monitor the cave, tree, and building roosts of other species such as Wahlberg’s fruit bats, Egyptian slit-faced bats, and Mauritian tomb bats (Taphozous mauritianus). With greater public awareness, more field outings, and more people reporting bat sightings and mortalities to us, we have even added two species to the South African list: Rendall’s serotine bat (Eptesicus rendalli), and Thomas’s house bat (Scotoecus albofuscus). Who knows how many more remain to be added–or even described as a new species to science! In fact, recent research on a colony of bats at the Hell’s Gate Military Base (a site visited by Tuttle on his recent tour) suggests these may represent a new species, related closely to the little free-tailed bat (Chaerephon pumila).

Finally, we are experimenting with bat house designs. Nigel Fernsby of the Gauteng Bat Interest Group has achieved success in attracting both free-tailed and serotine bats to bat houses at several locations. Following discussions with Merlin Tuttle this January, Fernsby and others are discussing a South African bat house research project, affiliated with BCI’s North American Bat House Research Project, in which data is collected from bat house owners across the country.

Undoubtedly a new phase for South African bat conservation has dawned with Tuttle’s visit and the resulting enthusiasm. Now this country’s bat groups will need to cooperate closely to harness the new public interest. Before the end of this year, we hope to have a handbook, Bats of Southern Africa, published by the University of Natal Press. The future for bats in South Africa has never looked brighter!

Peter John Taylor is Curator of Mammals and Convener: Durban Bat Interest Group, Durban Natural Science Museum. Inquiries about his forthcoming Bats of Southern Africa can be sent to: books@press.unp.ac.za, or petert@prcsu.durban.gov.za. 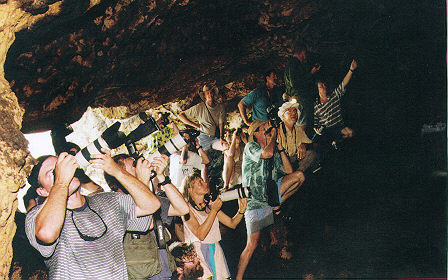 The media had a field day–literally–accompanying Merlin Tuttle (in beige with hat) and Peter Taylor (far right, in back) to caves, parks, and other stops on a South African “bat safari,” which Taylor and other local bat workers arranged. Here reporters take pictures of Egyptian fruit bats that are well acclimated to human visitors in their shallow sea cave at Mission Rocks. 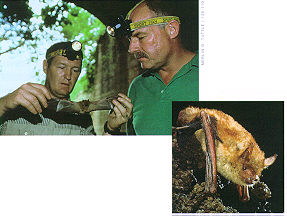 Tuttle and others view one of the two enormous bat houses in the town of Komatipoort. Constructed long ago in the hopes of having bats control malaria-carrying mosquitoes, the houses are currently sheltering many less bats than they could if refurbished. Knowing that large bat houses in the United States have become tourist attractions (e.g. the University of Florida house), South African bat workers are planning to renovate these with this added benefit in mind. 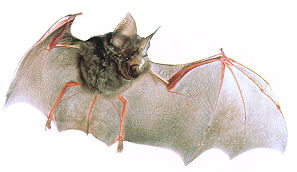 Left: A small colony of Mauritian tomb bats roosts high on the trunk of an acacia tree. 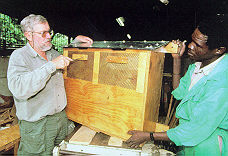 Nigel Fernsby (left) and his assistant, Aron Chauke, put finishing touches on one of Fernsby’s bat houses. Because experimentation is the only way to determine the housing needs of different bat species in different climates, Fernsby and other South Africans are beginning to compare information on the success of different bat house styles, as Americans and Canadians have done through BCI’s North American Bat House Research Project.