"Adivina qué comen los murciélagos" ("Guess What Bats Eat") was unlike any game the students at Francisco Cirilo School had ever played. Although they barely realized they were learning as they played, the lesson that day was an important first step towards protecting a bat cave near their little town of Congregación La Boca, and eventually towards protecting bats all over Mexico.

Educating communities near significant bat caves is one of the initial goals of the PCMM (see sidebar). Cueva de la Boca, the cave near Francisco Cirilo School, may once have housed one of North America’s largest bat colonies but now is estimated to have a summertime population of only 100,000. Though the enormous cave dominates the area and is a popular weekend destination, local residents know surprisingly little about it and its resident bats. The public’s resultant lack of respect for this natural treasure is all too apparent: cave walls are covered with graffiti, and trash is strewn about the ground.

Because of Cueva de la Boca’s past importance and current sightseeing traffic, our PCMM team chose this area to test our pilot educational program. We wanted to see if our curriculum was as good as we hoped, if we could generate support for bat conservation, and if a community-by-community approach to education was the best strategy for this region. After a month of testing last spring, we have some muy positivas answers to these questions.

The program was divided into two parts: a traveling exhibit called "Los murciélagos, Un mito en nuestra cultura" ("Bats, A Myth in Our Culture"), and a series of classroom lessons. The three classroom sessions lasted about two hours each (one of which was spent visiting the exhibit) and were led by biology students María de Jesús Teniente and María Luisa Franco. We worked with four rural schools near Cueva de la Boca–a total of 31 teachers and 312 children, ranging from fourth to sixth grade. We also chose students from a school in a larger town to use as a control group. These students were not exposed to the program, and a questionnaire given at the beginning and the end showed a strong increase in knowledge of the participants compared to these non-participants.

We had developed a good blend of learning techniques to ensure that the children would stay interested, but our worries were unnecessary. From our first lesson–the BCI video "Bats of Latin America"–to the final game we played, the students could not have been more enthusiastic. They were thrilled to have guest instructors, to play new games, to learn about bats and Cueva de la Boca, and to see a video, which in itself was a new experience for many of them. A see-through bat model (a new product sold by BCI and others) was another memorable surprise for the children as we explained distinct features of bats. Even recess became a fun bat lesson with an outdoor game we created called "A volar por la cena" ("Flying for Dinner").

Knowing that children usually learn better when they have an emotional attachment to the subject, we had also created a mascot, Marcelo the friendly Mexican free-tailed bat (Tadarida brasiliensis). Mexican artist Juan Sebastián designed Marcelo and produced drawings for a story we wrote called "Marcelo, el murciélago" (Marcelo the Bat). As our mascot, Marcelo was printed on materials such as file folders and erasers in the packets we gave teachers and students.

When we read the Marcelo story to the children, it was immediately apparent that they liked this friendly bat who lives and feeds in their neighborhood. They followed along in their own copies of the book, learning about Marcelo’s insectivorous diet, nocturnal behavior, and distinctive characteristics as a mammal and as a migratory bat.

At the end of the second session, we played one last true-or-false game, which served the dual purpose of reinforcing previous lessons and giving us a chance to see how much the children had learned and retained. We then gave the students information forms, which they eagerly filled out. This summer we sent them "Protectors of Marcelo " club membership cards and a Marcelo puzzle as a surprise present. In this way, we are able to maintain contact between the students and the program.

By the time we took our classes to the bat exhibit for the third and final session, the students already knew much of what other visitors were just learning from the displays. The exhibit was held at the Cultural Center of Villa de Santiago and had been honored with a grand opening by the mayor. In a brief stay of only one month, the exhibit had 608 visitors–more than any other traveling show at the Center. One of the most popular and effective displays appeared to be the specimens of Mexican bats. Visitors were encouraged to examine and touch the specimens, and children and adults alike were pleasantly surprised to discover that bats have soft, smooth fur. Many people made a point of telling us that the exhibit helped change their attitudes about bats.

In the end, we were pleased to discover, from the children’s answers to the final game and questionnaires, that they had assimilated the main concepts regarding bats, the benefits bats bring to the community, and the need for protection at Cueva de la Boca. But the questionnaires couldn’t capture their enthusiasm. Several had told us after the first session that they couldn’t wait to get home and tell their parents about bats. Many of them had strongly identified with Marcelo; for example, a number of students referred to bats in general as "Marcelo and his friends." One boy said that he planned to create a poster to help Marcelo and his friends. Another, with the typical eagerness of a child, stated that he was going to change his name to Marcelo. Others wanted to go to the cave right away and start working as rangers to protect "Marcelo’s family."

We hadn’t even packed up our things when the teachers began asking us how soon we could return and how they could get more materials for bat lessons. We plan to return later this year, but we also are staying in contact with both teachers and students through the "Protectors of Marcelo Club." Moreover, we are only just beginning efforts that will involve the whole community in protecting their cave.

Our plans for the future of this program are ambitious but not unrealistic–if our mission continues to inspire people the way it did in the community of Congregación La Boca and neighboring towns. We hope to:

Restore Cueva de la Boca’s once large bat population and develop the ecotourism potential for the benefit of local residents;

Evaluate and continuously improve our educational materials for use in other parts of Mexico;

Identify which Mexican caves have similar problems to Cueva de la Boca and plan educational programs for these areas; and

Create programs for the general public, not just communities near bat caves.

By first teaching communities to care for their own bat populations, then pursuing a wider audience among other citizens, we hope to greatly increase protection and appreciation for "Marcelo and his friends"–all the bats of Mexico.

(Sidebar)
What is PCMM?

The Program for the Conservation of Migratory Bats (dubbed PCMM after its Spanish name, Programa para la Conservacíon de Murciélagos Migratorios) started as an informal, wishful idea when a group of bat researchers from Mexico and the U.S. got together in 1991, identified factors that were negatively affecting bats in Mexico, and launched a joint project to reverse some of those factors. A few years later they met again with some Mexican and U.S. bat experts, as well as people interested in bat conservation from other perspectives. This effort eventually resulted in a coalition that currently includes BCI, the University of Miami, the University of Tennessee, the U.S. State Department, the U.S. Fish and Wildlife Service, the Mexican National Institute of Anthropology and History, the Mexican Society of Mammalogists, the Federal Government of Mexico, and the National University of Mexico (UNAM).

The objective of the PCMM is to recover and conserve the populations of migratory bats that move between Mexico and the United States, which we hope to accomplish through research, education, and government partnerships. We developed the pilot educational program to be tested at Cueva de la Boca after research at four caves in that region and a socioeconomic study of the area. More details about the program are available in BATS, Fall 1995, or by contacting Steve Walker at BCI (512) 327-9721, ext. 25.

Laura Navarro, a specialist in environmental education, has been instrumental in several environmental education programs in Mexico. Joaquín Arroyo is president of the Mexican Society of Mammalogists, co-coordinator of the PCMM, and a researcher at the National Institute of Anthropology and History. Rodrigo Medellín is vice-president of the Mexican Society of Mammalogists and a researcher at the Center of Ecology, National University of Mexico (UNAM). He is also on BCI’s Scientific Advisory Board. 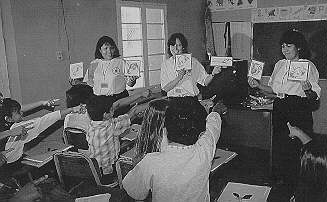 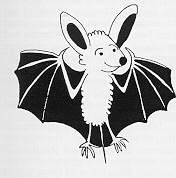 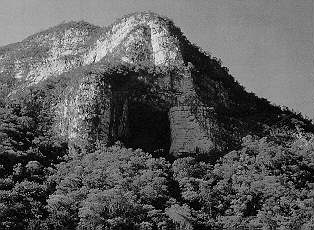 The magnificent entrance of Cueva de la Boca is visible from a nearby road, and thus the cave attracts many visitors. Before undertaking the educational pilot program in surrounding communities, PCMM biologists inventoried the cave to determine, among other things, bat populations and the extent of damage the cave has sustained from human visitors. 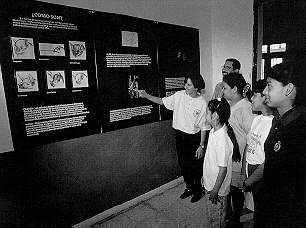 Laura Navarro guides visitors through the bat exhibit at the Cultural Center of Villa de Santiago. Enlarged bat photographs illustrate lessons on the benefits of bats to humans, bats’ roles in ecosystems, and the characteristics of different bat species, particularly those native to the region.

The story of Marcelo the bat has been translated to a computer program so it can reach even more children. 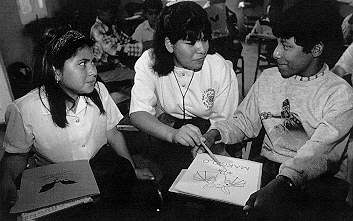 María Luisa Franco discusses the story of Marcelo with students. Teachers’
packets include lesson guidelines, follow-up questions, and instructions for each grade level, as well as basic scientific background information on bats.