A MARVELOUS SET of circumstances allowed me to take a vacation in Barcelona, Spain, this past spring, and I discovered a batty tidbit about the city that no guidebooks had mentioned.

In the middle of a sight-seeing stroll down one of Barcelona’s main avenues, I happened to look up and notice a bat adorning the streetlamp. The story behind this bit of bat ornamentation, at least as I heard it, goes like this:

King Jaume (way back when in the 13th century) was worried one night before an important battle because some of his men were opposed to his battle plan. That night, when he went to bed, there was a bat flying around in his tent. In his sleep, he dreamt that he won the battle, and upon waking concluded that the bat was a good omen signifying that his strategy would succeed. Sure enough, he won the battle, and thereafter incorporated a bat into the Barcelona city seal, as seen on the streetlamps of Barcelona’s Paseo de Gracia. 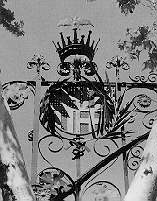 street lamp in Barcelona, no caption