You may not have noticed, but the world’s most famous bat may be hiding in your liquor cabinet. This distinguished bat has adorned the label of Bacardi Rum since it was first sold in 1862. In those days many people didn’t read too well. In order to overcome this problem Don Facundo Bacardi chose a trademark that would make his rum easily recognizable. His bat is still there.

The makers of Bacardi Rum didn’t just use bats. They have a long tradition of promoting the values of bats to the public. Some 20 years ago, Bacardi Imports published what may have been the first educational brochure to introduce people to the truth about bats. One quote, in retrospect, seems almost prophetic.

“After, all, bats are one of man’s best friends. Really. Bats were around a long time before D.D.T. and they prove a lot more effective. No chance of immunity for the bugs! In the normal course of things, one bat can consume thousands of insects in a night. To put it another way, if the world wasn’t batty, it might be buggy.”

We are indebted to Mr. Gordon Sears, Chairman of T. J. Ross and Associates for having introduced us to Mr. Bill Walker, President and Chief Executive Officer of Bacardi Imports. Both had read our Wall Street Journal article on the importance and plight of bats with great interest. They met with us in Milwaukee on February 9 and thoroughly enjoyed meeting our own famous bat and learning more about the world needs of bat conservation. Mr. Walker presented us with a generous contribution in support of our conservation efforts and we look forward to close cooperation in the future. 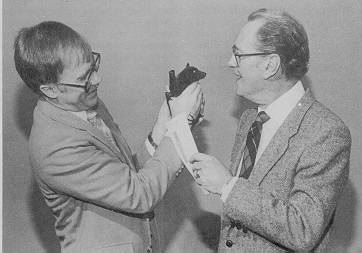 Dr. Merlin Tuttle, President of Bat Conservation International, is assisted by one of his favorite bats in accepting a generous contribution from Bacardi Imports, presented by Bill Walker, President and Chief Executive Officer.