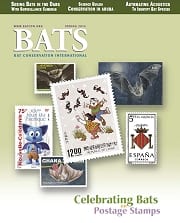 I’ve been using acoustic-monitoring equipment (bat detectors) to survey bats as part of environmental impact assessments in Portugal for the past 10 years, and I realized early on that identifying species through their echolocation calls involves a great deal of uncertainty. Some species are easily identified because their calls are distinctive, but the calls of other species share similar characteristics and can be almost impossible to classify with confidence. Worse still, the calls show considerable variability depending on geographic location, activity, flight height and other environmental factors.

Echolocation is the remarkable biological sonar system that most bats use to navigate and hunt in the dark. Bats emit sounds into their flight path and precisely analyze the echoes that come bouncing back. The beeps and trills are usually beyond the range of human hearing. They are collected by ultrasonic bat detectors, which can also convert the calls to audible ranges.

Bat detectors have been used in research since at least the mid-1970s. And with the advent of affordable and reliable bat detectors in the 1990s, acoustic surveys have become increasingly common and valuable. But those detectors, usually operated by hand, often required a great amount of time and effort to analyze each recording and minimize uncertainties in species identification.

With the development and increasing use of automatic recording stations in the past decade or so, everything changed. When bat detectors could be left unattended to record and store echolocation calls of flying bats, the number of calls collected each night increased dramatically. “Big Data” – and the analytical challenges and rewards that accompany huge datasets – made its appearance on the acoustic-survey scene. Reliable analysis of each of the many thousands of recordings that were being obtained soon became almost impossible.

As a graduate student in environmental science with a focus on statistics and computer programming, I began considering fully automated approaches to reliably process these huge amounts of data. Since previous research has confirmed that geographic location is a significant variable for bat calls, the first thing I needed was a reference database of bat echolocation calls that were recorded in Portugal. No such database existed as I began this study. Also, the recordings had to cover the many variables that bat researchers face in the field, including such complications as high and low signal-to-noise ratios resulting from cluttered or open environments, rustling foliage and closely related species.

After collecting a full library of countrywide recordings, I then had to develop a method for converting the audio signals into a format that could be fed into statistical models that could detect bat calls amid the noise and measure key parameters, such as frequency, bandwidth, duration, maximum energy, etc., within each call. From those parameters and measurements, new statistical models would be needed to classify each species.

With the support of a Bat Conservation International Student Research Scholarship and the help of two colleagues, we began compiling our call database for mainland Portugal in 2011. We decided to record captured bats to ensure that each was correctly identified by species and to focus only on search-phase calls. These are emitted continuously throughout a flight, and they are one of the most species-specific calls.

Using hand nets, harp traps and mist nets, mostly at cave entrances, along rivers and over water tanks, streams and small ponds, we captured bats at more than 50 locations across mainland Portugal. Whenever possible, we used bats captured by other researchers for other projects. Before release, the species of each captured bat, along with its gender and approximate age, was determined morphologically by a bat biologist. When the morphological identification was inconclusive, a genetic sample was taken.

Since bats do not usually use search-phase calls immediately after hand release, we made our recordings as far as possible from the release point. Light tags (tiny “sticks” with chemical lights) and night-vision goggles were used to track the bats after release. We experimented with less-expensive reflective tape instead of light tags, but with little success.

After 1½ years of intensive fieldwork, our database included a total of 2,968 calls from 748 bats of 20 of the 25 bat species in the country and we were ready to begin the next stage: data analysis.

We used an open-source computer language, the R Project for Statistical Computing, to develop a program to filter the recordings, detect the individual bat calls and measure 19 parameters (or variables) from each call. The program is completely automatic and worked for most recordings. When the recordings were seriously contaminated by insect noise or with low-intensity calls, however, the program didn’t work well, mainly because it couldn’t detect individual bat calls. We are developing new algorithms in hopes of improving detection.

Next, we used a two-stage process to classify the calls. In the first stage, calls were classified into one of six groups of species: Rhinolophus, Myotis, Pipistrellus/Miniopterus, Nyctalus/Eptesicus/Tadarida, Plecotus and Barbastella. Each group was defined by similar characteristics in their echolocation calls.

Then, in stage two, calls within each group were classified into species. Due to limitations in sample size, however, some calls were classified only by group and not as individual species; this mainly involved Myotis species.

We used two different approaches for classification of calls: ensembles of artificial neural networks and logistic regression models. Neural networks are nets of digital neurons modeled, albeit crudely, after the human brain, with the ability to improve their performance through “training.” They outperformed logistic regression for classification, but the sophisticated statistical model had the advantage of quantifying the importance of individual variables. The work continues.

The models for the first classification stage, which identified species groups, revealed excellent accuracy of 92 to 100 percent. In the second stage, species classification, accuracy was not as good, although equally promising: species identification was correct 50 to 100 percent of the time. During this phase of our research, we achieved three main goals: we built the foundations for a database of bat calls recorded in mainland Portugal, developed a computer program to analyze recordings of bat echolocation calls, and devised statistical models to classify those calls to the corresponding species.

The database should be very valuable for the acoustic identification of Portugal’s bat species. And the program is proving to be a powerful tool for bat researchers since it can provide almost immediate identification of a bat species or species group from recorded echolocation calls. It can also process the huge numbers of recordings that are now produced by automatic recording stations, reducing the costs associated with monitoring projects and allowing for long-term bat monitoring for wildlife management.

This research is far from complete and we are still working to enhance our results. The capture and recording of bat calls continues, and a more robust computer program is being developed. In the near future, we plan to begin examining the variability in echolocation related to geographical location, sex and age.

BRUNO SILVA is an environmental scientist who conducted this research while earning a Master’s degree in Statistical Modulation and Data Analysis at Évora University in Portugal.

Acknowledgements
The author thanks colleagues Sílvia Barreiro and Pedro Alves for their invaluable help and support. He also acknowledges the August 2012 publication by Charlotte Walters of the Zoological Society of London and colleagues of an online tool (iBatsID) designed to identify European bats by their echolocation calls. Silva reports that their results in some ways inspired his own, which is designed to process much larger amounts of data.