Visiting schools by day and netting bats by night, two bat biologists try to accomplish as much as possible in a brief stay on the remote island of Rodrigues . . .

By Heidi Jamieson and Kim Whitman 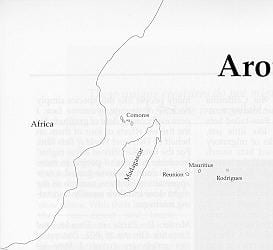 As our plane descended through puffy white cumulus clouds, we were greeted by the first sight of our home for the next two months–a tiny island ringed by a coral reef and aquamarine seas. Our destination was the island of Rodrigues in the southern Indian Ocean, one of the world’s most remote tropical islands and the only place where the Rodrigues fruit bat (Pteropus rodricensis) can be found in the wild. We had traveled halfway around the world to study this endangered megachiropteran, and to say we were excited to finally reach our destination would be a serious understatement.

Rodrigues’ small land mass (about 65 square miles, 104 square kilometers) supports a population of 35,000 people and approximately 2,000 bats. Previously uninhabited by humans, Rodrigues was discovered by Europeans in the mid-1600s. With humans came rats, pigs, dogs, cats, goats, and cattle–all of which preyed heavily upon the island’s fauna and flora. Felling of the forests for building materials, fuel, and agriculture also contributed greatly to decimation of the environment. By the 1950s, Rodrigues was an environmental disaster. Almost all of the forests had been destroyed, taking with them into extinction an untold number of native plants and at least 15 species of endemic vertebrates. The bats barely survived this wave of extinctions, and by the mid-1970s, there were fewer than one hundred left.

Enter Gerald Durrell of the Jersey Wildlife Preservation Trust. Famous for saving species most people overlooked, Durrell made the Rodrigues fruit bat a focus of his conservation efforts. Twenty-three bats were captured and placed in two captive breeding facilities. Twenty years later, they have multiplied into nearly 500!

At this point, there is no plan to reintroduce the captive bats into the wild, because the fragmented forest already supports as many bats as it can. Fortunately, Rodriguans realized before it was too late what a treasure they had in their beautiful, endemic, seed-dispersing fruit bats, and the Rodrigues government and private conservation agencies joined forces to protect the bats and encourage reforestation. As a consequence, wild populations have increased.

This is when we came in. Our goals were to support and further the Rodriguan conservation efforts by presenting an education program about bats and by doing an analysis of the genetic diversity in the wild population. We did this with the support of our employer, the Philadelphia Zoo, and the Bat Taxon Advisory Group (Bat TAG), a committee that facilitates conservation and education programs for bats as an extension of the American Zoological and Aquarium Association’s "Species Survival Plan"[BATS, Spring 1996].

Our schedule was an ambitious one: band, weigh, and obtain skin samples from wild bat populations in the evenings, and by day teach hour-long bat lessons to fifth-grade classes in every primary school on the island. All in a mere two and a half weeks–the amount of time we had left after meeting the appropriate government authorities and getting set up.

To give an idea of how we managed to pack so much into this short time, we offer an outline of our typical day, which for ease of telling, begins at 4:00 p.m. At this hour every day, a driver from the Forestry Department would pick us up at our government residence to drive us to our netting site at Cascade Pigeon, one of the few remnants of forest left on Rodrigues, and one in which the bats remain relatively plentiful. Before climbing through the barbed-wire fence protecting the forest from hungry sheep and goats, we would bathe liberally in what was touted to be the world’s most powerful insect repellent. Our efforts were always in vain. Within minutes of descending into the forest, we both felt like the local blood bank.

With about an hour of daylight remaining, we would immediately raise all six of our mist nets into openings between the trees, in areas we had cleared on previous evenings. We would then concentrate on clearing an area for another net–a process that involved climbing trees, cutting down branches, using a slingshot to shoot guy ropes over high tree branches, and sweeping all debris from the ground beneath the nets. This labor-intensive task usually took three days to complete, but it was worth the effort. Moving the nets around definitely increased our chances of capturing bats.

Then began the vigil of waiting for bats, sitting silently and motionlessly, eyes fixed on the nets. The occasional "hit"was met with an enthusiastic call of "bat in the net,"followed by frantic scrambling to get the net down and the bat in hand before it could escape. Once we had a bat, we weighed and measured it, made observations of its teeth, wings, and general condition, and took a small skin sample from each wing. Before release, we banded each bat with a colored plastic ring on its thumb so that it could be identified if recaptured. In general, the bats were quite calm during the whole process, which took a half hour on average.

By 6:30, night would fall, and most of the bats would have dispersed from their roosting sites, leaving little activity near the nets. The two of us then retired to the mosquito-free haven of our tiny, four-by-six-foot tent, where we ate dinner (tuna fish or peanut butter sandwiches) and fell into an exhausted slumber. Kim got up at three-hour intervals during the night to check the nets for bats. However, all this nocturnal activity was in vain; we caught bats only at dusk and dawn. When dawn came at 4:00 a.m., we would get up (often soaking wet during the early days, as our tent leaked), resume our net-watch positions, and wait for the bats as they returned from their night of foraging on fruit and flowers. At 6:30, we would bring the nets down, pack up all our gear, and hike up the rocky slope out of the forest.

A Forestry Department driver arrived at 7:00 a.m. to take us back to our residence. We then had two hours to hang our soaked clothes and equipment out to dry, prepare and eat breakfast (our only hot meal of the day–usually oatmeal), take showers, prepare our lunches (again, either tuna fish or peanut butter), and gather the materials necessary for teaching at the school of the day.

At 9:00, a driver from the Education Ministry would take us to one of the twelve primary schools on the island. Over the course of two and a half weeks, we taught 25 classes of fifth-graders. (The students are all fluent in English and French, though their native language is Creole.) The lessons were interactive, involving pupils in activities ranging from dressing up in an educational bat costume to role-playing how a cyclone can hurt bats when there aren’t enough trees for protection. (We played the role of cyclone, while students acted as bats or trees.) Thanks to the generous support of the Disney Wildlife Conservation Fund, we were able to leave two Bat TAG education kits with the Education Ministry for local teachers to use.

When we had finished teaching each day, the driver took us to Port Mathurin, the largest town on the island, where we shopped for food and replacement netting supplies. Rather than make the driver wait for us, we would walk home, trudging up a long, steep hill and arriving by about 3:00 p.m. This gave us an hour to pack all the now-dry equipment, make our dinner, and pump-filter the water we would need for drinking, cooking breakfast, and washing dishes during the next 24 hours. At an average of 4 gallons (15 liters) per day, this task required 1,500 strokes of the hand-pump filter daily. At 4:00 in the afternoon, the whole cycle would begin again.

All told, we caught 14 bats and taught more than 600 children. Although the bats constituted a very small sample size, we were nonetheless pleased to find out upon analyzing the skin samples that they still harbor a significant amount of genetic diversity. Now we are beginning a genetic analysis of every captive Rodrigues fruit bat in North America to help us make better-informed management decisions in the future.

Meanwhile, part of our work continues in the form of the "Rodriguan Environmental Educator Project."In January 1998, the Mauritian Wildlife Foundation hired Mary Jane Raboude as the first ever full-time environmental educator on the island. A Rodriguan herself, Raboude approaches her work at the community level, working in concert with Rodriguan governmental and nongovernmental agencies. In the past year, she has begun making contact with the 80 villages on the island, soliciting ideas about how they would like to improve their environment. When, for example, the villagers of Deux Goyaves decided they wanted a green space, Raboude coordinated an activity to plant endemic trees. She reports hearing one participant exclaim, "I haven’t seen this plant for a long, long time. I thought they no longer grew on Rodrigues. What a wonder!”

When working with children, Raboude tries to let them make their own observations and conclusions. Recently a young group initiated their own creek cleanup near their village. What began as international concern about the Rodrigues fruit bat is now helping the islanders reclaim their natural heritage. 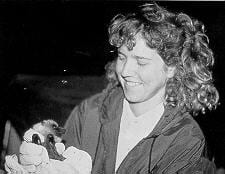 The excitement shows on Kim Whitman’s face as she begins measuring and examining the first Rodrigues fruit bat the authors caught in the Cascade Pigeon forest. 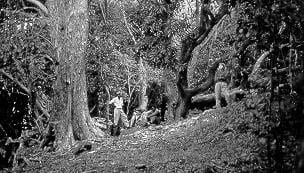 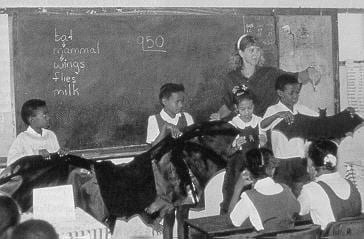 Whitman demonstrates the diversity of bats to Rodriguan fifth graders using some of the teaching tools created by the American Zoological Association’s bat advisory group. In all, 25 classes participated in the lesson, which covered basic bat biology, the importance of bats to ecosystems, the uniqueness of the Rodrigues fruit bat, and ways in which students can help prevent the bats’ extinction. 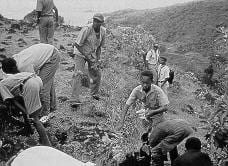