A small colony of Wahlberg’s epauleted bats (Epomophorus wahlbergi) roosts under the eaves of the house where BCI member Camellia Ibrahim lives in a small village in northwestern Kenya. The bats took up residence early last year when the fig tree in the family garden came into fruit, and grew from a small colony of nine to, at times, over 30. Now the bats are serenaded to sleep each day with Mozart’s opera, “The Magic Flute.”

For a curious 11 year old who wants to become an animal research scientist, Camellia has opportunities most children only dream about. Having her own colony of fruit bats to study is just one of them. Her formal education alternates between a semester of school in Maryland in the United States and then a year and a half of home instruction in Kenya. Her father, an Egyptian, is with the Food and Agriculture Organization of the United Nations and her American mother is an artist and photo journalist (who taught Camellia how to take pictures of the bat colony).

Camellia has always loved animals, but she became especially interested in bats after reading Merlin Tuttle’s article, “Gentle Fliers of the African Night,” in the April 1986 issue of National Geographic. She was excited to discover that she lived not far from Dr. Tuttle’s research site in Kenya. After writing to BCI to learn more about “her” bats, she found how little is actually known about Wahlberg’s epauleted bats, and what an opportunity she had to study them. She began keeping a log. Through her simple observations, those of us who do not have a fruit bat colony outside our bedroom window, can catch a glimpse of the domestic lives of bats.

Camellia’s log
I got up at 20 minutes to six so I could see the bats come in this morning. It was still quite dark, but our porch lamp showed them quite well. The scene under our eaves looked like a busy airport! The bats all used the same flight path. Some hovered to inspect roosting quarters and others had squeaky quarrels over territory. It took them about 15 minutes to get settled in, and then a late comer arrived and SHOOS, they all went. Seconds later they started the whole performance all over again, a few bumping into each other and letting it be known they didn’t like it! The first light of day, and the first crow of the rooster started as the bats finally settled down for the day.

March 8, 1987: There are 10 bats today. A mother and baby have a “room” all to themselves. The mother, Helen, holds the baby, which I have named Coffee, in her wings so you can only see the baby’s head. She licks it often.

March 9: Is Fawn another mother with a very young baby? Yes! There is a much smaller baby. Its little face is still pink around its nose and mouth and is completely hidden in its mother’s wings except when she grooms it. I have named him Toto, which means small child in Swahili.

March 19: At first we thought that the bats returned to the same roost each night. Now we know they don’t. It’s “first come, first served,” though certain bats prefer certain places.
April 2: For the first time, I really got to see how they groom themselves. To get inside their wings, they open them up like an umbrella. They also do this when they groom their babies.

April 12: Our figs have been very ripe for the last two or three weeks, but this food supply is getting low. What other things could they eat? We found a guava seed in their droppings, but we do not have guavas in our garden. After checking our neighbor’s garden, we found a guava tree, but its fruit are finished. How far do our bats go to find food each night?

April 20: We have wondered how bats, hanging upside down (or rightside down to them!) can make their toilet without dirtying themselves. Today we watched Tander do it. He used the extended thumb on his wings to hang on and let go with his feet. Then he turned the rest of his body down. When he finished, he brought his feet up again and let go with his wings.

April 21: Last night we repeated our banana-guava experiment to see what fruit they prefer. But this time we put it out at dusk and took it away at dawn so the birds couldn’t get it and confuse our experiment results. They didn’t eat it! ¥April 23:£ Fawn and Toto are back. He is so big that he hangs by his own feet, but still against his mother, wrapped in her wings. There are 25 adults now and 2 big babies!

May 7: 28 adults and 1 baby. Fawn and Toto are still together, but Coffee has left his mother. He now roosts by himself, but still near his mother.

May 21: 34 bats! Yesterday there were this many too, but they got frightened away to seven. Are the newcomers making the other ones scared? Their droppings look funny too: coal black, and they don’t keep their shape.

May 23: There are so many bats now, that they have to roost closer together. When they groom themselves, they bump wings and this sometimes starts quarrels.

May 25: Tonight I watched them leave the roost again. They thoroughly groomed themselves, then at quarter to seven the first bat left. The last one left at three minutes to seven. I saw one bat in our fig tree and five in our neighbor’s garden. I don’t know where the others went, but this explains that they don’t stick together at night.

June 6: During the past four months, the bats have sometimes been scared away for one reason or another, but at least one always stayed, so I called him General Eisenhower for his bravery. Today he really showed how brave he is. My dad used an electric power blower to clean leaves from the gutters. Before he got to where the bats were, I scared them away on purpose so it would not be too frightening for them. The General, of course, stayed! We watched him as the deafening machine got nearer and nearer, staring at it as his nose and ears twitched frantically. Only when the machine was two feet away from him, did he leave! Ten minutes later, the General had returned!

Camellia’s sense of discovery with the bats proved contagious; her parents both became involved and even their Kenyan gardener was very interested, telling others “all about them.” The colony of Wahlberg’s epauleted bats was still in residence later in the summer when Camellia left for a term of school in Maryland. When she returns to Kenya, the fig tree in their garden will be in fruit again, and hopefully the bats will be there too so she can resume her observations. 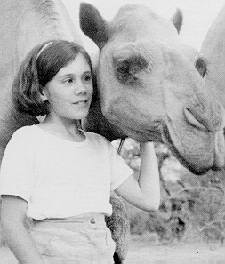 BCI member, Camellia Ibrahim, poses with the camel she rode on a six-day trek near Samburu Game Reserve in Kenya 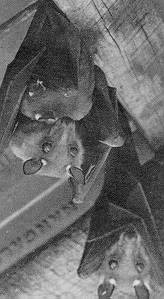