An educational campaign comes to the rescue for flying foxes in storm- devastated Samoan Islands earlier this year.

On the first weekend in February 1990, the Samoan Islands, a small archipelago 5,000 miles south of Hawaii, experienced its first major hurricane in over 24 years. For three days Hurricane Ofa lashed the islands with high winds and rain. In the aftermath, severe damage to the rain forests was immediately apparent. On the island of Tutuila, where Pago Pago, the capital of American Samoa is located, at least 40% of the forest was severely damaged. Trees were broken, and entire swaths of forest were mowed down. Patches remained, but no significant amount of fruit was left on the trees for flying foxes and other animals. In the days and weeks that followed, many of the trees dropped their leaves and any remaining fruit. Large sections of mountainside were left brown and bare. It would be months before the forest would again be green and before trees would begin to produce fruit.

The island forests are home to three endemic species of bats: two flying foxes, Pteropus samoensis and tonganus, and the little sheath-tailed bat, Emballonura semicaudata. Shortly after the hurricane, drastic behavioral changes occurred in both species of flying foxes. Major roosts were fragmented because of the forest destruction, and large groups of bats started to move around the islands in search of food. Normally nocturnal tonganus began foraging during the day, moving closer to villages and feeding on whatever was left in the plantations. Samoensis, a diurnal species and present in much lower numbers than tonganus, lost its usual shyness and also began approaching villages. There was even one report of flying foxes competing with chickens for food on the ground.

As the weeks wore on, the rain forest continued to deteriorate, and very little food was left for bats. Some people began setting out food for the starving animals, but the most common human response over the next several months was to hunt them. Hundreds, perhaps thousands, of flying foxes were killed. The primary predators were young boys with slingshots. Many of the bats were eaten, as flying fox is a Samoan delicacy, but most were not. Potting hunger-weakened bats for target practice with rocks or guns became a fad.

In American Samoa local laws regulate bat hunting, which is permitted only from May through July between the hours of 6 a.m and 6 p.m. (to prevent shooting the diurnal ösamoensisò). Enforcement of these laws, however, has been difficult. Until this year, many people were unaware of them. (Fortunately, one part of the legislation has been highly effective: it stopped trade of Samoa's flying foxes to off-island markets.*)

When the situation grew serious after the hurricane, it became obvious that intensive efforts were needed to get the message across. Le Vaomatua proposed a media blitz campaign but lacked funds to implement such an effort. Bat Conservation International and two of its members, Drs. Elizabeth (Dixie) Pierson and William Rainey, helped. Dixie and Bill, who have long had a personal and professional interest in Samoa's flying foxes, were kept apprised of the post-Hurricane Ofa situation. They, in turn, kept BCI informed of the problem, and as a result BCI funded Le Vaomatua's proposal. Through the efforts of BCI's Board of Trustees chairman, Verne Read (who also has a personal interest in American Samoa and its bats), the project money was quickly raised through The Chapman Foundation.

Soon after, full-page ads in English and Samoan, describing the flying foxes' plight, appeared twice a week in local newspapers. A popular radio station aired four different spots, two in English, and two in Samoan, up to 30 times a day. Television spots featured an arboreal "batman" asking people, in the Samoan language, not to kill his relatives. And buttons showing a silhouetted flying fox against the moon, with the caption "Fa'asao o le Pe'a" (save the bat), were distributed.

The American Samoa Community College Land Grant Program also assisted with the effort. After viewing BCI's slide program, "Bats: Myth and Reality," they translated the text into Samoan. The Samoan version was presented to all of the islands' mayors who were asked to help stop the hunting. One suggested method–to collect all the slingshots–had unexpected results: several mayors personally turned weapons in to the Land Grant Program!

Once the campaign began, and awareness of the bats' situation increased, many people began feeding the hungry animals instead. Some kept injured or starving bats, nursing the animals back to health and then releasing them. Since most knew at least one family who was keeping a bat, many people had their first positive experience with a living fruit bat.

Several bat projects at the territorial elementary science fair addressed the bats' fate after the storm. One four-year-old pre-schooler did a bat feeding preference study on two captive bats. His project won Le Vaomatua's environmental award and garnered a top award in the overall fair. School children also did other bat-related projects, and many of their posters and banners are now on display at public places around the island.

Another good fortune for flying foxes was that the Department of Marine and Wildlife Resources called off the bat hunting season this year. This management decision, coupled with increased awareness of the plight of flying foxes, will certainly aid in the recovery of bat populations. Not only was American Samoa bombarded by the campaign, but nearby Western Samoa also received the information via radio, television, and newspaper. The BCI/Le Vaomatua cooperative venture has had a truly international impact.

Has all this worked? There is abundant evidence that it has. The flying foxes are no longer as prevalent in villages now that the forest has begun producing again, and this has certainly helped to decrease the killing. There are still plenty of bats around in the evening, but the sound of rifle fire is no longer common near villages.

It is far too early to assess the full impact of the campaign in Samoa, perhaps a generation too early. Like other Pacific islanders, Samoans too often view bats as vermin–or dinner–and it will take time to soften this perception. Definite inroads have been made into the local consciousness about the importance and vulnerability of flying foxes. Using the media to deliver the message that bats are key elements in the preservation of the precious rain forest–le vaomatua–is powerful and effective.

(bio)
Nancy Daschbach is a board member of Le Vaomatua, a conservation organization in American Samoa. She represented the group at BCI's Pacific Island Flying Fox Conference in Honolulu earlier this year.

Author's note: We don't yet know the fate of the sheath-tailed bat after the hurricane. Two caves were known to house these bats, and both were severely damaged by the storm. It is hoped that there are other roosts, perhaps up in the mountains, that still shelter these important insect eaters. 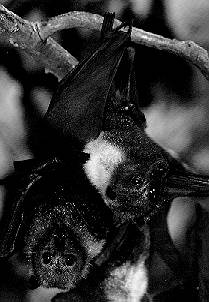 When the hurricane stripped trees of their fruit, flying foxes were left without food. Normally shy, the starving bats moved closer to villages where they foraged on whatever was left in plantations.