The first expedition to photograph bats for a new book resulted in more than just extraordinary pictures. . .

As we entered the mouth of the cave, cold air blew at our backs. A thin coat of ice flowed over the rocky floor like a glacial tongue over gigantic teeth. Above us, deeper in the cave, thousands of sleeping bats clung like icicles to the ceiling. This was my first trip as Merlin Tuttle’s field assistant on the journey to photograph bats for his new book, Bats of North America.

In winter, Tennessee’s Pearson Cave shelters one of the largest known hibernation colonies of endangered gray bats (Myotis grisescens), some 190,000 individuals. So few caves meet the strict requirements these bats need for hibernation that they will choose less than one percent of available caves. The configuration of Pearson makes it well suited for a gray bat winter roost and an ideal place to photograph these bats in hibernation.

Before we began the trip, we planned carefully to ensure that only the most expedient photographic methods would be used; awakening hibernating bats could jeopardize their survival. This meant first staging photos in Merlin’s home studio, using local captive bats and artificial sets, to determine subject–to-flash distances and light ratios. All of this careful preparation would minimize unnecessary noise and photo flashes that could disturb the bats once we were at Pearson.

We planned our trip to coincide with a U.S. Fish and Wildlife Service (USFWS) census so there would be no extra visits into the roost. The heavy gate on the cave entrance, installed to prevent human disturbance, is opened only once every two years to allow federal wildlife officials to check the status of the cave’s winter bat population.

The bats of Pearson Cave are special to Merlin Tuttle. He lived in the area during his teens, beginning his career there at 15 by observing the cave’s gray bats. He assured both me and Paul Hoffman, another BCI employee recruited as an assistant, that this was an easy cave and didn’t take any special climbing expertise. Since my caving experience was limited to small Texas sink-hole caves that would take all of 30 minutes to explore, I was reassured. Having heard of Merlin’s previous exploits, we should have known better.

Pearson Cave is a perfect cold trap. With a large room lower than either of its entrances, the cave provides ideal temperatures for bats to hibernate. Cold air is drawn into the cave at one entrance, forcing warm air out of another higher entrance, and thus trapping a reservoir of cold air in the lowest room. Caves like this are rare, so it wasn’t surprising to see other species of bats also seeking shelter here. It was now December and they were well into their long winter’s sleep. We quietly passed scattered individuals on our long descent into what seemed the center of the earth.

Led only by the bobbing light of our headlamps, we reached the lowest level where the gray bats were hibernating. In the dim light, we quickly assessed how best to photograph their patchwork clusters. The difficulty lay in the tricky positioning of ourselves and our equipment on the slick floor. Bob Currie, a biologist with the USFWS, began his census while the three of us began our well-rehearsed team photography. As Merlin whispered instructions, Paul and I quietly positioned the camera flashes, holding them anywhere from 24 to 36 inches away from our sleeping subjects. To limit disturbance, we kept our lights low, making it very difficult for Merlin to focus his camera, a time-consuming process that forced us to maintain uncomfortable positions.

It was frustrating standing so close to thousands of hibernating bats without really seeing them. I would catch only glimpses when our bright flashes suddenly illuminated the cluster for a fraction of a second, burning fur-covered images onto my eyes for a few moments. Only later when the pictures were developed would I actually see what they looked like.

While in the cave, the four of us had to stay together for several reasons. First, we had to carry a lot of heavy photographic equipment, including sufficient battery power for the flashes. While three of us were tethered with an electrical umbilical cord that kept us no farther than 20 feet apart, Bob Currie continued to count the bats. Since he had to locate and count them anyway, we took advantage of the situation to photograph bats at the same time. Most would wake up as a result of even one passing human. What concerned Merlin was that we not keep them awake longer than necessary.

After slipping and sliding and nearly breaking my neck with the precarious footing, I soon realized my earlier expectations of this adventure were far from reality. Long before the trip, I had asked Merlin if I should prepare for it with rigorous exercising. I was in fairly good shape but didn’t know what demands might be placed upon me. “Naw, it’s easy,” he lied.

Once we had finished in the big room, I learned we had to continue into the narrow catacombs branching out from this main part of the cave. As we nervously sought finger-holds, crabbing spider-like across the chasms, Merlin would see a bat or group of bats on the wall or ceiling above us and insist that we climb up to photograph them. At one point he was shooting a particularly interesting cluster when the wafer-thin ledge we were perched on began to crumble. While bits of it continued to fall onto the boulder-strewn floor below, Merlin remained absorbed in his task. Repeatedly seeking new toe-holds as the ledge slowly gave way under our equipment-laden weight, I wondered if this type of insanity was the prerequisite for being a biologist or merely the result.

One incident put me squarely in touch with my mortality. After the torture I had endured thus far I couldn’t imagine how it could possibly get worse. So when we came to a place I have since dubbed “The Pit,” one glance into its bottomless maw threw me into terror of a certain gooey death. Self-preservation being high on my list of priorities, I asked if I could wait for them to pick me up on their way back out. This, much to my disappointment, was not an option. Based on the locations of hand-and-foot holds through passageways, we had taken the least difficult course through the cave, and to avoid further disturbance to the bats, we would not return by the same route. I had to proceed.

The sheer walls descending into the dark were barren of any meaningful toe-holds, and they stretched across 15 feet of emptiness that may as well have been 15,000. It looked like we had reached a dead end, our low passageway ending in this huge void with nothing on the other side but another sheer wall, the barest hint of ledge visible. When Merlin studied bats in this cave during the ’60s, he had discovered a new chamber here with a large number of bats. To prevent future disturbance, he had slid a stone slab across the small access hole, which was positioned on the rock face above The Pit’s far side. The bats had their own, even more difficult, way in and out.

Merlin went first, traversing the gradually widening walls by “chimneying,” a caver’s term for bracing oneself across an open space with shoulders and back on one side and legs on the other, inching slowly along. Upon reaching the narrow ledge on the far side, Merlin slid aside the stone slab to reveal the small opening, a mere slit about 10″ X 18,” which I was sure my hips would never pass through.

Despite my fear I began inching across, only to discover that at 5’3″ I was too short to brace across the widest part and couldn’t go the distance. Earlier when I was crossing another seemingly bottomless pit, I had asked Bob if he would retrieve my body if I slipped and fell down into the abyss. He asked if I really wanted them to “trash” the cave just to get my body out. I now realized I would spend what remained of my extremely short life suspended over The Pit. Had it not been so dark, I’m sure my life would have flashed before me.

Seeing my dilemma, Merlin improvised a solution that did not inspire much confidence, yet given the circumstance, was the best idea so far. He left his safe perch and braced himself over The Pit between me and the tiny hole on the far wall. At the critical point where I could move no farther, I made the leap of faith, literally climbing over his body, which bridged me to the other side. Like Alice going down the rabbit hole, I firmly grabbed the edges of the opening and pulled myself into a larger room and safety.

I paused with a sigh of relief, grateful to be still alive. Behind me, an alarming crack sent my heart pounding again. “Darn, there went my favorite handhold,” Merlin exclaimed, bringing me back to the dangerous reality of what might lie ahead. We were not out of this cave yet. But as I looked around in the dim light, I was distracted from my fears by the amazing sight around me: the cave walls on both sides were literally carpeted with tens of thousands of sleeping bats.

After what seemed like an eternity, we left Pearson Cave, and I staggered into the reassuring starlight of the bright winter sky. It was hard to believe that we actually had shot more test photos while preparing for the trip than we had finally taken in the cave. And despite the careful preparation, Merlin still worried about the results. After many hours of hazardous, exhausting work, only one or two of these photographs would make it into the new book.

Reflecting on the expedition, I have found an expanded appreciation for life. Seeing tens of thousands of sleeping gray bats festooning entire cave walls, enhanced my sense of the great range that the process of life encompasses within our biosphere. For me it now includes rock, ice, and air as inseparable components. I could no longer clearly discern exactly where cave ended and bats began. And, in this particular incidence of being only an observer in a fragile domain, I better understood the interrelated fragility of life everywhere.

[bio]
Donna Hensley is a science assistant at BCI. She also spent the summer of 1991 as the first conservation intern at Eckert James River Bat Cave in central Texas. 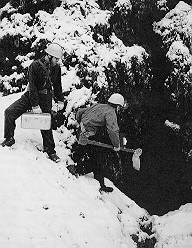 Merlin Tuttle and Bob Currie descend into Pearson Cave where hibernating bats are censused once every two or three years. 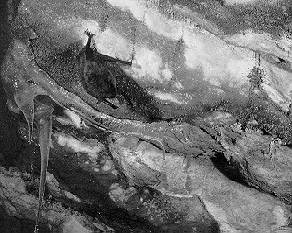 Big brown bats (Eptesicus fuscus), one of North America’s heartiest bats, were often found hibernating alone in the coldest parts of the cave. Minimizing disturbance to the bats was paramount, so the team moved quickly and quietly using limited light. 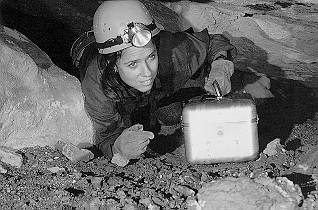 Squeezing through tight places with bulky photographic equipment was only one of many challenges to reach the secluded areas of the cave where bats were hibernating. 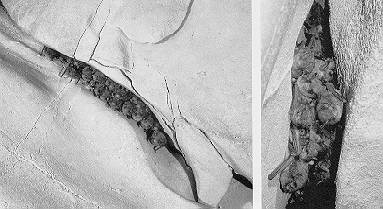 At least seven bat species share Pearson Cave during the winter. Among them, the team found endangered Indiana bats (Myotis sodalis) seeking the warmth of other bodies in tiny cracks on the cave ceiling and walls. 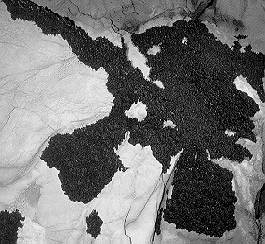 The sight of thousands of endangered gray bats festooning the walls of a secret chamber rewarded the author after the ordeal of getting there.