Where you can go to see and learn about bats. . .

The rush of thousands of soft wings buffeting each other as bats emerge from their cave, a lone bat dipping low over a pond for a drink of water–whatever the circumstance, if you appreciate bats, seeing them in the wild is likely to be a thrill you won’t soon forget.

For many years, Carlsbad Caverns was one of the few places where people could both see bats and learn more about their natural history. While most parks don’t have Carlsbad’s large bat population, today many state and national recreation areas highlight bats in their interpretive programs. You may not always be lucky enough to spot bats, but there are now more opportunities than ever to learn about them in their own habitat.
At Nickajack Cave near Chattanooga, Tennessee, visitors have the rare opportunity to see endangered bats. Nearly 100,000 gray bats (Myotis grisescens) take flight each spring and summer evening to feed, the emergence lasting about half an hour. In 1985, the cave, which is located on Nickajack Reservoir, was designated a wildlife observation area. Last year, the Tennessee Valley Authority built a platform to facilitate bat viewing, and they erected a kiosk to educate visitors about the cave’s bats and the colorful history of the cave.

Nearby in Alabama, visitors to Blowing Wind Cave can see the largest bat emergence in the eastern U.S. As a result of recent conservation success, approximately 500,000 gray bats can be observed in a spectacular emergence from the cave within the Wheeler National Wildlife Refuge.

In Missouri, Rock Bridge Memorial State Park emphasizes bats in their environmental programs. The park protects and manages the Devil’s Icebox, a cave that is home to both maternity and hibernating colonies of gray bats, as well as several other species. On weekends during summer, park naturalists lead visitors on walks above the cave entrance, timed with the evening bat flight. The park also offers a unique opportunity to see where bats live. During the fall and spring, when mother bats are not using the cave to rear their young, the park offers workshops to learn about the ecology and geology of the cave. Natralists lead small groups through the undeveloped cave, stressing conservation during their explorations. Naturalists at Rock Bridge are proud of their accomplishments in not only educating the visiting public about bats, but also the nearby community. A visit to this park offers bat enthusiasts exciting opportunities to learn about these fascinating animals.

Devil’s Den State Park in Arkansas offers another unique opportunity. The park, located in the rugged Boston Mountain section of the Ozarks, is a special place: one of its crevice caves is a hibernaculum for the endangered Ozark big-eared bat (Plecotus townsendii ingens), one of the rarest bats in North America (only 2,000 may remain). Park naturalists lead guided hikes through the spectacular crevice area (but not into the cave) to talk about these bats. Each summer, the park holds their special annual Bat-O-Rama to educate people about bats and the importance of bat conservation. One of the highlights is a series of amphitheater programs given by guest bat biologists.

The Eckert James River Bat Cave in the Texas Hill Country is home to approximately four million Mexican free-tailed bats (Tadarida brasiliensis), an important summer maternity colony. The cave was recently acquired jointly by the Texas Nature Conservancy and Bat Conservation International [BATS, Summer 1990]. A trail to the cave and an interpretive kiosk will be in place by late spring, in time for summer visitors when they arrive to see the spectacular twilight emergence from this sinkhole cave. The largest flights are in July and August. While visitors are in Central Texas, they can stop in Austin to see nearly 750,000 free-tailed bats take flight from beneath the Congress Avenue bridge [BATS, Summer 1990].

Wherever you go, we wish you good viewing! 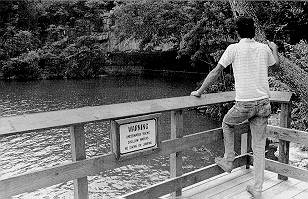 Photo above: A visitor to Nickajack Cave in Tennessee waits on an observation platform for a colony of endangered gray bats to emerge from the cave.

The following list of parks and recreational sites is only partial. It represents state parks and other public natural areas where visitors have an opportunity either to see bats or to learn more about them through interpretive programs.

Your visit will be more enjoyable if you contact facilities listed for additional information before you visit. Let them know you are interested in bats. Programs about bats often are given only on specific dates, so be sure to call ahead to avoid disappointment.

The park rangers and naturalists listed will be able to answer your questions about bats at the time of your visit. Ask them to point out where and when you are most likely to spot bats, but remember inclusion in this guide does not guarantee that you will see them. A bat detector might help. Ask if an Animal Checklist is available; a listing of the park’s bat species will be included.

The facilities listed are protected. Entering bat caves on your own is strictly prohibited. Bats are easily disturbed in their roosts, so the best way to appreciate them is to leave them alone, simply observing them from a distance as they emerge from their daytime homes.
+ denotes locations where you can see a regular bat flight
* federally listed as endangered

[sidebar]
If you have a favorite place where you go to see bats or know of a park that regularly includes bats in its interpretive programs, please write and let us know. An expanded Vacationer’s Guide to Bats, which will also include foreign locations, zoos, and museums, is planned for publication in spring 1992. Your input is welcome and encouraged. Please direct comments on your visit to parks listed or suggestions for additional listings to Mari Murphy, Editor.