Dr. Paul Prociv, a medical doctor and lecturer in medical parasitology at the University of Queensland, is “concerned chiefly with human health.” About three years ago he began research on a little known bat parasite to determine “whether it was responsible for human disease.” He is “not a traditional conservationist” and is “aware of the needs of economic progress.” Nevertheless, he was quite “dismayed” to learn of Queensland’s recent decision to terminate protection of flying foxes. The following excerpts from his protest of 26 July 1984 shed important light on the issue.

“In the short time I have been studying these animals, I have noticed an obvious decline in their numbers. Their camps are harder to find, and the numbers of animals are diminishing. This has occurred during a period when they were protected by law, and I know of many instances when they had been destroyed in large numbers by irate farmers (for no logical reason) and ‘sportsmen’ keen to indulge their love of firearms. Dr. John Nelson, when working on bats in the 1960’s, was aware of a decline in their numbers during his study, and Dr. Francis Ratcliffe who undertook a monumental study almost 60 years ago had written about their great reduction in numbers even then.”

“The declaration of an open season on possums, which in most people’s eyes are cute and cuddly, would be met with an intense outcry from the community. Even reasonable arguments in favor of kangaroo-culling are confronted with a wall of emotional prejudice. Unfortunately for bats, their popular images of black shadows in the night sky, spine-chilling shrieks, jugular punctures and haunted houses do not facilitate the case of those who argue for protecting these animals. And yet, without exception, every person who at firsthand has observed (and often handled) my experimental flying foxes, particularly mother bats suckling their offspring, has had their preconceived delusions shattered on finding them to be very affectionate and intelligent creatures (comparable to dogs) which also happen to be furry and warm-blooded like possums, koalas and kangaroos.

“While possums have not been threatened by urban development (where they breed successfully and cause considerable damage to fruit trees) and kangaroos seem to have made the most of farmland expansion, the flying fox, with its complex social and feeding requirements, has not fared so well. The dispersal and reduction in numbers of fruit bats which is now occurring could quite conceivably result in their extinction. This already has happened in some countries. In Australia this could be ecologically catastrophic, although at present nobody can be certain of the effects as we know virtually nothing of the behavior and environmental significance of these animals.” 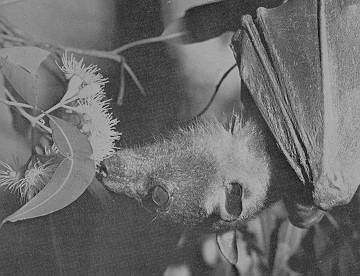