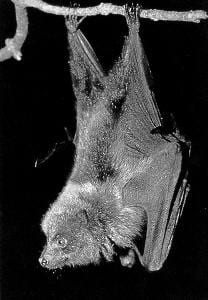 Admittedly, I’m biased, having spent more than eight years contemplating the various attributes of this species. I’ve observed Rodrigues fruit bats "up close and personal"in captivity, as well as framed against the verdant leaves of a Rodriguan forest.

Flying foxes are an attractive group in general, but Rodrigues fruit bats go beyond your typical flying fox. To begin with, they’re adorably fuzzy. Their chocolate brown fur is accented with splashes of pure gold, which in some individuals extend from the shoulders all the way down the back. In the glow of a strong tropical sun, these highlights are even more striking–prompting Rodriguans to give their endemic chiroptera the nickname "golden bat."But what really sets the Rodrigues fruit bat apart is its face. Its foreshortened muzzle, liquid black eyes, and ever-mobile triangular ears make it look like a small black chow dog with wings. Okay, so maybe that’s not everyone’s idea of the perfect face, but it works for the bats.

Weighing in at less than a pound with a two-and-a-half-foot wingspan, Rodrigues fruit bats are medium-sized as flying foxes go. But don’t be fooled by their diminutive stature and beguiling appearance: when caught in a situation they don’t like, these bats have an attitude. Their teeth, designed for grasping and holding fruit, also serve extremely well for grasping and holding the fingers of bat biologists. Fortunately, a good pair of leather gloves is enough to diminish the bite to a painful pinch.

These bats also possess a powerful pair of lungs, capable of producing a startling scream. Their favorite occasions for demonstrating this ability appear to be during breeding and while being retrieved from mist nets. Observations have shown that the volume, pitch, and duration of the bat’s vocalization is directly proportional to its proximity to your ear–and your level of fatigue.

No description of Rodrigues fruit bats would be complete without a reference to their aroma. Whether housed in an exhibit or hanging 100 feet up in a tree, these bats carry with them a distinctive, ripe odor capable of eliciting comments from even the most nasally challenged. Produced in dermal scent glands and rubbed onto nearby branches, leaves, and other bats, fruit bat musk is a potent scent believed to aid bats in identifying each other in social interactions.

With their relatively short, broad wings, shaped for maneuverability, Rodrigues fruit bats are not the strongest of fliers. I’ve watched them fly furiously against the wind for several minutes without making any headway, only to become exhausted and be swept backwards. Unfortunately, Rodrigues Island sits directly in the middle of the cyclone belt. The destructive winds of this area’s annual cyclones can knock bats out of trees and sweep them out to sea. Only adequate forest cover can protect the bats from Mother Nature’s ire. Rodriguans are doing their best to help: reforestation programs and protection of existing forests are increasing the habitat available to the bats. With all of these good efforts and a little luck, the golden bats will continue to flap ponderously over Rodrigues for many years to come.