The National Park of American Samoa moves a step closer to becoming a reality. . .

Four years ago President Reagan signed a bill authorizing creation of the National Park of American Samoa, the first in the U.S. National Park system to protect a tropical rain forest and the first to protect critical habitat of declining Pacific island flying foxes [BATS, Winter 1988]. This landmark legislation was made possible through intensive efforts by Bat Conservation International, its members and friends, and Samoan conservationists.

However, legislation is only one of several steps in creating a new national park. Since Samoan law prohibits sale of communally owned land, the next step was for the National Park Service (NPS) to negotiate with the traditional high chiefs, who represent the village land owners, which parts of the islands to include in the park.

The hope is to have units on three islands, preserving unique wildlife habitat ranging from coral reefs to lowland rain forest and mountaintop cloud forest. With the isolation and habitat diversity of these South Pacific islands, they support many plants and animals found nowhere else in the world. Their two threatened flying fox species are primary pollinators and seed dispersers and are therefore of special concern to BCI.

Progress was recently made when the NPS proposed that the traditional high chiefs and other Samoan officials be invited to Hawaii to see several national parks and monuments in operation so that they could better understand park objectives. Bryan Harry, the NPS Pacific Area director, Doug Couillard, the new park’s superintendent, and Gary Barbano, the national park planner for the Pacific Area, invited BCI to co-sponsor these important meetings, which took place in August of this year.

Twenty-one Samoan high chiefs and government representatives, the most influential delegation ever to leave Samoa, flew to Hawaii for a four-day visit. A generous grant to BCI from The Chapman Foundation, helped by a special fare from Hawaiian Airlines, enabled them to come. The East-West Center in Honolulu and the National Park Service provided additional funding.

BCI was represented at the meetings by Chairman of the Board Verne Read, Merlin Tuttle, George Chester, and Donna Hensley. Dr. Paul Cox, a Brigham Young University botanist and BCI member, provided essential assistance as translator for the chiefs. Cox was one of the original initiators of the park project, along with Verne and Marion Read, and Merlin Tuttle.

During the Samoans’ visit, their Hawaiian hosts gave them a true royal welcome with traditional ceremonies and feasts. Through several days of touring sites on the islands of Hawaii and Oahu, the chiefs were able to see firsthand how parks can protect wildlife and preserve cultural heritage, as

well as how the new park would benefit their lands and people. They left with unified enthusiasm that the boundaries proposed by the park service could now be adopted subject to minor changes.

The third step in establishing the park is completing an appraisal of the over 8,000 proposed acres. It must then be accepted and approved by local Samoan authorities and the NPS for a 50-year lease of the land. Following this, planning for the park and visitors can proceed. BCI is now working to assist with these processes. 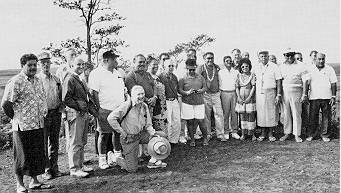