GENEROUS DONATION from Futura Communications and Leslie Paper Company has made the new color cover for BATS possible. Because many people don’t know what colorful creatures bats really are, BCI is pleased that this donation has made it possible for us to show you!

BATS has come a long way since its first official issue in 1983. It remained a four-page newsletter until the Spring 1987 issue when it was expanded to eight pages, and then, only a year later, doubled to 16. This is good news for bat conservation, and we want to keep our members fully informed.

Readers of BATS may also be interested to know that your magazine is produced entirely by BCI staff, from layout and design to typesetting, before being sent "camera-ready" for printing at Futura Communications. Futura has worked with us for over three years, helping us to keep publication costs to a minimum.

With this new volume and new era for BATS, we are also adjusting our quarterly publication schedule slightly. Expect to hear from us in January, April, July, and October (and please let us know if you don’t). 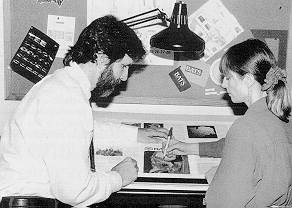 Bill Waller of Futura Communications checks a press proof of BATS with Mari Murphy, Editor: Much of BATS is produced at this drawing table in Mari’s office at BCI.