As the crane lowered the huge steel cage over the shaft of the Millie Hill Mine in Michigan’s upper peninsula late this summer, it marked the completion of a bat protection project that unified a community. This winter, and for many to come, the approximately one million bats that hibernate in the mine will rest peacefully, safe from disturbance. Both little and big brown bats (Myotis lucifugus and Eptesicus fuscus) gather from thousands of square miles around to spend each winter at this site.

The inactive iron mine, which houses the second largest population of hibernating bats ever discovered, was scheduled to be backfilled this past spring. But Steve Smith, a local caver, discovered the bats first and called BCI. After carefully considering the documentation Smith sent, BCI contacted the Michigan Department of Natural Resources (DNR) to inform them of both a major discovery and the imminent danger for the bats.

Bob Doepker of the state DNR quickly arranged meetings with local officials, and Merlin Tuttle and BCI Special Projects Coordinator Donna Hensley flew to Iron Mountain to assist and to discuss alternatives to sealing the mine [BATS, Summer 1993]. The meetings and a public lecture convinced the community that the bats were worth saving.

Since then, a special steel cage was designed to cover the 300-foot-deep vertical mine shaft. Eight feet high and 10 feet square, the cage was lowered onto a newly poured concrete slab around the entrance this August. A 12-foot-long corrugated tube was lowered into the shaft to stabilize loose rocks. This new design will serve as a prototype for future vertical shafts.

The project to protect the Millie Hill Mine bat population was greatly helped by strong community support. Local residents and businesses donated both time and materials. The Michigan DNR now plans to check all remaining mines in the northern part of the state, and the area’s leading mining company, Cleveland Cliffs, has offered to help sponsor a special training seminar for mining and wildlife officials. The successful conclusion to this story is a good example of how working cooperatively can benefit community in addition to its wildlife. The people of Iron Mountain are proud of their role in saving this key wildlife resource. 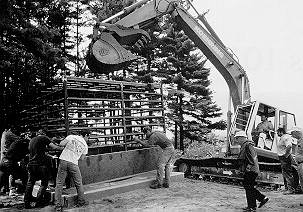 Above: The cage design that now protects the Millie Mine entrance could serve as a prototype for other difficult-to-gate vertical shaft mines. An estimated million bats hibernate in this mine each winter