Having discovered that Mammoth Cave was once the world's largest bat hibernation site, we are now working to attract new residents.

Mammoth Cave in Kentucky is by far the world's longest known cave system, with approximately 350 miles of mapped passages and further exploration still in progress. In recent times, few bats have been observed in the cave, but an old newspaper account from 1810 claims that passage walls were covered with bats "crowded so close that they resembled a continued black cloud." Could it be true, or was this simply another grossly exaggerated cave tale? Rick Olson, Park Ecologist for Mammoth Cave National Park, wanted to know.

Olson examined numerous early reports, but the one he found in the May 1851 issue of the American Journal of Science and Arts was especially intriguing. In October of 1850, biologist Benjamin Silliman, Jr. of Yale University, visited Mammoth Cave, made detailed observations, and reported that "bats are numerous in the avenues within a mile or two of the mouth of the cave. . . We found countless groups of them on the ceilings. . . and it is quite safe to estimate them by millions."

How could all of this now come as a surprise? Because until very recently, most people had little interest in bats other than to avoid them. In fact, a photograph taken before the area became a U.S. national park documents that the entrance to nearby Dixon Cave was once covered with chicken wire to exclude bats.

Most of Mammoth Cave's bats had probably disappeared before that time, however. Native Americans began entering the cave as early as 4,000 years ago, carrying cane torches to light the way as they explored and mined sulfate salts such as gypsum. It is unlikely that these explorers had more than a relatively minor impact on bats in the extensive cave. But with the arrival of settlers in the late 1700s, the situation for bats must have changed dramatically. The settlers eventually discovered large deposits of nitrates, essential for making gunpowder, and began extensive mining during the War of 1812. Also, by the 1820s, tourism had become lucrative and increased rapidly over the next 100 years.

From the bats' point of view, one of the most devastating circumstances was probably the intentional restriction of airflow through the historic entrance, which would have changed the internal temperature. In winter, air warmed by the walls would rise out of upper entrances, while cold air flowed in at the lowest entrances. Even in summer, much cool air remained in low areas, in the same way that cold air is trapped in the horizontal, open-topped freezers in a grocery store. With alterations to the entrance, however, this pattern of airflow would have been disrupted, raising temperatures. This change alone was probably sufficient to render most of the former cave habitat unsuitable for bat hibernation. In fact, it is surprising that millions had managed to survive long enough to be documented by Dr. Silliman in 1850.

Because Rick Olson had written a proposal to restore the historic entrance airflow patterns, he and other park staff were extremely curious to know just how many millions of bats had once used Mammoth Cave, and to what extent it might be possible to encourage the bats to return. For answers to these questions, they called BCI, asking if there was anything we could do to document locations and extent of past use.

In June 1996, BCI biologist Jim Kennedy and I led Olson, Robert Currie of the U.S. Fish and Wildlife Service, Michael Turner of the U.S. Army Corps of Engineers, and paleontologist Rick Toomey of Illinois State Museum into the historic section of Mammoth Cave. There we searched for the characteristic reddish stains left on limestone from long use by roosting bats. In many places the job was complicated by the accumulation of years of smoke stains from early miners and explorers who used kerosene lanterns and torches.

We did, however, find undeniable evidence of extensive use by hibernating bats. Skeletal remains identified by Toomey indicated that many were probably endangered Indiana bats (Myotis sodalis). In addition, I discovered that the Smithsonian had historic specimens of both Indiana bats and endangered gray bats (Myotis grisescens) from Mammoth Cave. Based on knowledge of the area, we can also assume that at least six other species were present.

To estimate past numbers of the two dominant species, we measured the areas where limestone had been stained by bats and assumed average roosting densities of 200 gray or 300 Indiana bats per square foot. By multiplying these roosting densities with the number of square feet covered, we could roughly estimate past numbers. We assumed that not more than half of the stained areas were covered at once, and we did not allow for ceiling and wall contours that could have doubled roosting surfaces. Despite this conservative approach, we concluded that the four sections we surveyed along main tour routes had been used by at least 9-13 million gray or Indiana bats. The entire system easily could have supported more than twice this number, making Mammoth Cave by far the world's most important bat hibernation site of the past.

Illustrative of the plight of bats, this once vast population was lost so long ago, with so little notice, that by the time Mammoth Cave National Park was founded in 1941, no one even remembered. Today, the park is an enthusiastic partner in bat conservation. The historic entrance to the cave was recently fitted with a proper bat gate. Research is now underway to determine what must be done to restore the system's original airflow and microclimate, which are so essential to bat survival. Restoring an undocumented cave climate that has been modified countless times over more than 185 years is an extremely difficult undertaking. The known preferences of hibernating bats may in fact provide one of the only insights to what is needed.

Efforts are also underway to reestablish bats in areas from which they long have been excluded. Long Cave, also in Mammoth Cave National Park, lost its formerly large population when a gate and concrete wall restricted airflow and prevented the cooling required for bat hibernation. In the summer of 1995, at the request of BCI and the U.S. Fish and Wildlife Service, the park replaced the structure with one friendly to bats. A bat-friendly gate has also been built to protect the Dixon Cave entrance, located very near the historic entrance to Mammoth Cave.

This fall, Mike Adams, the Park's Chief of Interpretation, began rerouting tourists so that at least one of the bats' former hibernation areas will be free of disturbance from cave tours. This is an important step; much work remains, however, to reestablish appropriate hibernation temperatures and completely eliminate disturbance in the designated refuge area.

The park is also cosponsoring a new workshop with BCI and Western Kentucky University. The unique curriculum focuses on the specific needs of cave-dwelling bats, using park caves and facilities for instruction. The first such workshop, held in August 1997, attracted 23 participants from 12 federal, state, and private wildlife agencies. Another is scheduled for the summer of 1998. (See advertisement in BATS, Fall 1997, or call BCI for more information.)

It is clear that Mammoth Cave National Park was once a winter paradise for countless bats from across much of eastern North America. How successful we can be in restoring at least a part of their former home remains to be seen, but we are proud of our new partners at the park, and we look forward to progress reports. Time and perseverance will be essential.

You can help by writing to thank park officials and encourage their continued efforts. Write to Park Superintendent Ronald R. Switzer at Mammoth Cave National Park, Mammoth Cave, KY 42259, or send
e-mail to MACA_Park_Information@ nps.gov. More information on the park is available at www.nps.gov/maca.

Merlin D. Tuttle is Founder and Executive Director of BCI. 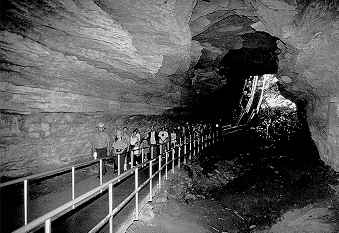 Park rangers lead visitors into Mammoth Cave. The park administration is currently working to restore bat habitat in the cave. With only slight alterations to tours, they can create a bat sanctuary, safe from disturbance. 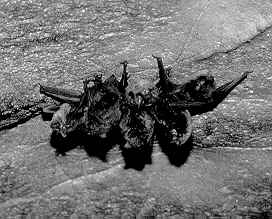 A small group of Indiana bats visits nearby Dixon Cave in the summer. Large hibernation clusters have stained the limestone through many years of use. Such stains help biologists estimate past numbers. 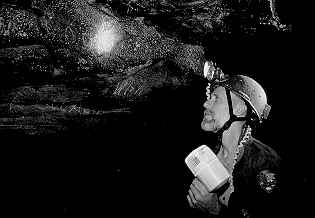 Park Ecologist Rick Olson examines old roost stains on the ceiling of Mammoth Cave. The stains, combined with surface etching caused by tiny bat claws, are a sure sign of past use by bats.