THIS ISSUE OF BATS, the 38th that I have produced, marks my last as the Editor. After 10 years at BCI, I have decided to retire so that I can pursue other, more personal writing interests that have been beckoning me almost since I first learned how to put words on paper.

The decision was not an easy one; this job has been richly rewarding, both in how much I have learned and in the encouraging comments that you, the members of BCI, have sent to me about the magazine. I have enjoyed getting to know many of you personally and through correspondence, and I’m lucky to have friends all over the world now.

Putting together a quarterly natural science magazine with a staff of one has been a challenge by itself. But filling each issue with a balance of articles written by experts on a highly specialized subject, and crafting it to appeal to readers all over the world to lay readers as well as professional biologists-raises “challenge” to new levels. Manuscripts for BATS don’t just arrive like surprise gifts in the mail; they must be actively sought. While many potential authors offer to write on a particular subject, most articles that appear in the magazine are the result of asking (okay, sometimes even begging).

Over the past 10 years I have had the opportunity to meet biologists from all over the world. Sometimes to work on an article I’ve had to track them down at their field research headquarters in a jungle halfway around the world, calling ahead to say, warm up the generator because I need to send a fax, and then to my amazement getting a call back a few moments later to let me know it arrived. Most of the time communication isn’t so exotic, but certainly the fax machine revolutionized my ability to work with authors in remote locations.

These scientists have generously contributed their time and expertise to write about their discoveries or to share their knowledge of bats with the readers of this magazine. Without their regular contributions, BATS would be a very different publication. In editing their articles for publication, I have learned a great deal about bats and about the fine art of translation, taking the often esoteric language of the scientist and interpreting it so that the average lay reader can understand and appreciate.

Both BCI and BATS have changed a great deal since I began working here in the summer of 1985; BATS was then a simple four-page newsletter, and we had a mere 500 or so members who read it. BCI had been founded just three years before, and people were only beginning to be aware that conservation of bats was an issue. Only a few years later there was so much progress to report that we doubled the publication’s size, doubling it again just a year later. We moved to a magazine format and published our first color cover in 1990.

BATS now has almost 13,000 readers in some 55 countries. It fills a niche no other publication occupies, and I am proud that it has become respected among professionals, that teachers from grade school through graduate school use it in their classrooms, and most of all, that readers are using what they learn in its pages to effect change for bats in their communities.

Although I am moving on as editor of this magazine, my interest in writing about bats and writing for BCI will not end, and I will still be involved as a contributing editor to BATS. I will also continue to be involved in other BCI publications projects and to support an organization and a mission I have come to care about very deeply.

When BCI moved from the Milwaukee Public Museum to Texas a little over nine years ago, I was the only employee and filled far more positions than just editor of BATS. As I leave, 22 people work at BCI, designing new educational materials, planning workshops and conferences, conducting research, assisting with protective efforts at home and all over the world, answering nearly 2,000 phone calls and some 1,400 written requests for assistance or information each month-and much much more.

A year ago we hired Sara McCabe to assist me with BATS and the many other publications BCI produces. Sara is a talented writer and editor who had joined BCI as a member only a few months before she joined us on staff. Sara has had a long-standing commitment to environmental action on a local level and has often used her graphic design and writing skills to promote awareness of an issue. She will now serve as the new editor of BATS.

Working with her in the production of BATS and other BCI publications will be Joan Ivy, who is just joining our staff. Joan’s background in both journalism and biology, plus her writing ability, enthusiasm, and commitment to conservation make her a natural addition to BCI’s new publications team. Merlin Tuttle will continue acting as scientific and editorial advisor, and the standards of the magazine will remain high.

I owe a special thanks to Merlin, who 10 years ago gave me the opportunity to grow with BCI. I believe both BCI and I have accomplished that. There is no doubt that this has been the most interesting job I have ever held (but that’s another story). I shall miss much of it, perhaps most of all, the wonderful people I have met. 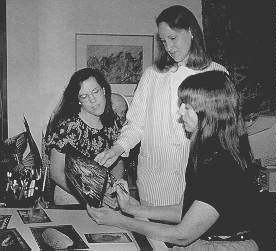