Eyes grew wide and mouths dropped open as I removed a small reddish-colored bat from the cloth bag that had been tied to a string around my neck. The rural Costa Rican audience giggled nervously, not quite knowing what to make of this blond "gringa"who had come to their village to enlighten them on— of all things— bats! In the 17 months I spent in Costa Rica, I gave more than 50 such programs throughout the country, speaking to groups of students, teachers, veterinarians, national park guards, and even to entire communities. Everywhere I went, I found people quite willing to talk about their experiences with bats.

Costa Rica is well known as Latin America's model for conservation and was the site chosen for an educational campaign sponsored by the World Wildlife Fund (WWF), with additional support from Bat Conservation International [BATS, June 1987]. I implemented this program with the help of various private and public conservation organizations such as the Environmental Education Foundation, the Program for Environmental Education, the Organization for Tropical Studies and at the State Open University in San Jose. The overall goals of this grassroots project were to educate people about Costa Rica's unique bat diversity and demonstrate the value of bats to tropical forests and products that people use daily. The program also helped to solve legitimate problems with vampire bats.

Costa Rica has recorded 103 species of bats. At least half of these include fruit or nectar in their diets, making them important agents of seed dispersal and pollination. Bats comprise 50% of Costa Rica's wild mammals. Yet in a survey I conducted throughout the country, I found that most people believed that there were only a few kinds of bats and most fed on blood. Many fears and misconceptions about bats in tropical America can be attributed to the habits of the Common vampire bat (Desmodus rotundus), the only bat in the world that feeds on the blood of mammals. Though it evolved to feed on wild animals, the vampire bat has almost entirely switched its diet to domestic livestock since the arrival of Europeans with their cattle and horses. In more recent times, the beef industry has grown in Latin America, fueled by the fast food trade. As a result, cattle are now the preferred prey of vampires. The "hamburger connection"has also led to an increase in vampire bat populations, and they are now considered to be serious pests in many countries. Because most Latin Americans don't distinguish between vampires and the many harmless species, tens of thousands of beneficial bats are destroyed annually.

The bat campaign used many types of materials to address these issues. Using BCI's slide/tape program, "Bats: Myth and Reality,"as a model, I created a Spanish version to focus on misconceptions about bats in tropical America. Ten copies were produced and donated to conservation and training programs such as the Costa Rican National Park Service, the Ministries of Agriculture and Public Education, tour guides, and various environmental education programs. One of the recipients, a veterinarian with the Ministry of Agriculture who works with rabies, is now regularly using the slide program when he speaks to communities and cattleman's organizations.
I also used the slide program, along with the live bat I brought with me, and a display of products from plants that depend on bats for propagation. On one occasion I visited a small Caribbean village without electricity and had to improvise: at a popular seaside tavern I played the audio tape on a portable recorder while I served customers a fruit salad made from what "bat products"I could find at a nearby market.

Another part of the campaign was to publish informative articles, and with the help of my Costa Rican colleagues I wrote several pieces for a variety of magazines and books dealing with, for example, environmental education, ecological problems, and natural history tourism. My local associations were also very helpful in making connections with the news media, and we were able to generate several articles in the leading daily newspapers, La Nacion and La Republica, as well as interviews with commercial radio and television stations.

The final objective of the campaign was to create an educational package that WWF could distribute to other Latin American countries. The package consists of a dynamic color poster using Merlin Tuttle's photographs and a book, Murcielagos de America Tropical, that covers a brief natural history of bats, their importance, and the life histories of 11 of the best j known New World tropical species. I am presently working on production of a poster on the identification and control of vampire bats. When completed, the poster will be distributed in those countries where vampires are found.

Living in Costa Rica was exciting and afforded me the opportunity to give a cultural perspective to the materials I developed. Providing materials that are relevant to cultural traditions and that address unique problems is essential for conservation efforts now and into the future. The Costa Rican environmental educators and news media now have the information they need to continue to spread positive news about bats. And for me, Costa Rica was just the first step in what I hope will be a lifetime of continued work in international conservation. 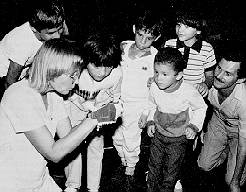 Pat Morton introduces a bat to a curious audience in Costa Rica. An entire village packed into a one-room school to hear her program about bats. PHOTO BY S. POISSON