After years of luring curious explorers, a historic cave is reclaimed for the big-eared bats who need it most . . .

By Michael Quinn and Jim Petterson

"What an experience! Gibson is so affected by Henry’s death that he is crying like a child, and it is all we can do to keep him from starting right up over the cliffs back to Lee’s Ferry."

So wrote Robert Brewster Stanton in July 1889 after three of his party drowned in Marble Canyon, now part of Grand Canyon National Park in Arizona. The men had been surveying a gorge in the Grand Canyon for possible railroad construction through the Colorado River’s scenic canyons (a dream, fortunately, never realized). Now they were unable to continue; it was time to retreat.

It was drizzling at mile 31 of the Colorado River as the survivors neared Vasey’s Paradise. Climbing the limestone outcrop above the river, they found "a whole row of cliff dwellings, with pieces of broken pottery all over the cliff." An old trail led up South Canyon–their escape! Before they began their climb, however, Stanton decided to cache their remaining supplies. He chose a cave in the rock face about 160 feet above the river.

As they carried their pots, pans, tools, and oars into the cave’s dim reaches, they probably didn’t realize they were being watched by several hundred individuals hanging from the ceiling. Stanton’s party likely intruded upon a summer maternity colony of Townsend’s big-eared bats (Corynorhinus townsendii). The cave, now named after the intrepid explorer, once housed the largest maternity colony of this species known in Arizona. Female bats gathered from a wide area to roost and raise their young together. The small bats ate thousands of insects and served as a vital part of the canyon ecosystem.

Townsend’s big-eared bats are particularly sensitive to human disturbance, with some colonies vacating a cave after being disturbed as few as two times. If approached too closely, the entire colony may take flight, abandoning their young. Unfortunately, modern visitors to the Grand Canyon have been drawn to Stanton’s Cave, not only by its size and mystery, but by stories of the prehistoric artifacts buried within–some thousands of years old. A growing number of hikers, cavers, and river runners have sought out the cave for these reasons, causing repeated disturbances for the bats. To set the archaeological record straight, a major excavation was undertaken in the summers of 1969 and 1970. The daily dust and noise from the dig–just a few feet beneath the bats’ ceiling roost–almost certainly caused the bats to flee the cave for those two summers, which in turn adversely affected their reproduction.

From any perspective other than that of the bats, the excavation was a huge success. The archaeologists unearthed extraordinary artifacts, including more than 74 split-twig animal figurines made by a prehistoric culture between 3,000 and 4,000 years ago; a layer of animal and plant remains dating from the Pleistocene, including bones of California condors and extinct mountain goats; and a layer of driftwood and lake sediments deposited in the cave more than 37,000 years ago. The cave was found to be a significant archeological and paleontological site, suitable for listing on the National Register of Historic Places.

After excavation was complete, the cave entrance was covered with a chain-link fence to preserve the historic resources. The fencing also had the unfortunate effect of prohibiting bats from easily leaving or entering the cave. In the center was a door made of rebar stabilizers, and some small openings above the door were the only space left through which bats could maneuver.

Later studies documented a rapid further decline of the Stanton’s Cave bat colony following installation of the fencing and some later "improvements" that plugged up even the small spaces above the door. By 1986, the cave was devoid of its former inhabitants, and there were only five major maternity colonies left in the state. At that time, a recommendation was made to cut a hole at the top of the chain-link door to allow free passage for bats. The modification was made, but no bats were seen using the cave for maternity roosting in the following years. The hole, although allowing bats a passageway, also gave people relatively easy access. In addition, inconsistent efforts at repairing the frequent cuts and breaks in the lower sections of the gate meant that almost anyone could gain entrance to Stanton’s Cave.

An effort was made in the fall of 1995 to shore up these breaks in the lower portion of the gate. In July 1996, approximately 20 bats were seen exiting the cave at dusk and roosting in the cave in the morning. Closer examination with binoculars and ultrasonic recordings confirmed the presence of Townsend’s big-eared bats. This observation represented the first evidence since the late 1970s that bats were attempting to reoccupy the cave.

Inspired by this good news, Grand Canyon Wildlife Biologist Jim Petterson proposed replacing the current gate with one that would allow bats access while preventing human passage. It quickly became obvious that the project would require the support of many different organizations, but luckily all of them proved more than willing. The National Park Service supplied boats, boatmen, welders, and support staff. Bob Currie of the U.S. Fish and Wildlife Service (USFWS) designed the gate and supervised its construction. Through the coordination of BCI’s new North American Bat Conservation Partnership (NABCP), the park staff received direct financial assistance from BCI and technical aid from BCI biologist Dan Taylor and Associate Executive Director Steve Walker. Also, in keeping with the spirit and interest of the NABCP, Park Service dollars were matched three to one by the Arizona Game and Fish Department, the USFWS, the U.S. Geological Survey, and BCI. The project was finally ready to go.

The process of getting materials to the cave was a bold adventure, almost in the league of Stanton’s original trip. In February 1997, two 37-foot rafts made the 31-mile trip down the river, hauling 8,000 pounds of steel as well as other supplies. Each 200-pound steel bar was then carried by hand up the 160-foot vertical rise from the river to the cave. A second river trip, in April 1997, hauled two arc-welding units, a generator, acetylene bottles, and oxygen tanks (perhaps the most dangerous component; they easily detonate if mishandled), and most important, our enthusiastic and able-bodied workers.

The 20-foot steel pieces were measured and cut to precise length, then welded into place. The result is an immense gate, about 20 feet tall by 20 feet wide, set back from the mouth and just barely visible from the river. With horizontal spaces 53/4 inches wide and 6 to 12 feet long, there are sufficient openings for bats to pass through, but none large enough for humans.

In other caves where Townsend’s big-eared bats have been protected with similar gates, the bats have reoccupied the site after only a few months. Grand Canyon wildlife staff are monitoring Stanton’s Cave to document the expected recovery of the cave colony, and first reports are very encouraging. During a bat survey river trip in May 1997, 120 bats were observed exiting the cave in the early evening dusk. Later, in July, we estimated there were about 60 Townsend’s big-eared bats using the cave, as well as four other species that we identified through ultrasonic recordings. Evidently this secure haven is precisely what the bats had been waiting for.

Jim Petterson was formerly the wildlife biologist at Grand Canyon National Park and is now an ecologist at Organ Pipe Cactus National Monument. 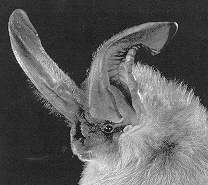 Robert Brewster Stanton (here, circa 1897) was just one of many visitors over the years to the picturesque cave that now bears his name. It is believed that Native Americans once used the cave as a ceremonial site. 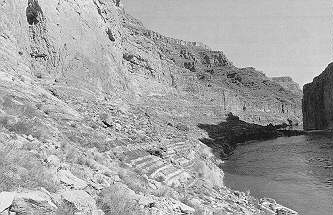 Stanton’s Cave lies high on a limestone cliff above mile 31 of the Colorado River. Moored beneath the cave is one of the 37-foot rafts the NABCP team used to haul gear for this project. 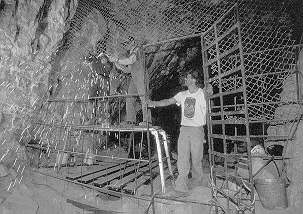 NABCP volunteers remove the chain-link fencing and door that covered the entrance of Stanton’s Cave for more than 20 years and prohibited bats from roosting there. 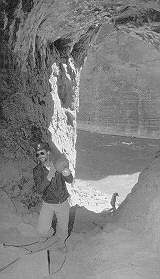 Hauling equipment is just one of many dangerous and difficult tasks involved in cave gating. Every gating job poses new logistical challenges, depending on weather, terrain, accessibility, and the size of the opening to be gated.

The Grand Canyon National Park estimates that about 165 split-twig figurines like this one were taken from Stanton’s Cave by visitors between 1934 and 1969. The figurines are believed to be thousands of years old. All remaining artifacts were removed in the official excavation of 1969-1970. 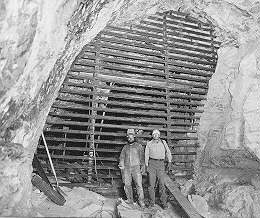 Dave Derosiers and Stan Sloan of the National Park Service show off the completed gate–20 feet high and 20 feet across at its widest.