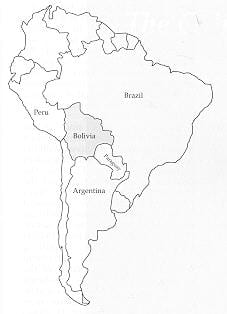 Imagine being able to see 21 species of bats in a day’s hike. In certain areas of Bolivia, this is the level of diversity I have discovered. From tropical rain forests in the north to dry, lowland plains in the south and the Andes Mountains in the east, Bolivia has an impressive 106 species of bats, and scientists are discovering approximately three new species each year.

When I first began studying Bolivia’s bats in 1989, I realized they were probably the most misunderstood animals in my country. In some areas, young boys mistakenly hunt them for display in their insect collections. In other places, people have so little regard for bats–which they see as dirty, ugly, rabid, and portents of bad luck–that they participate in a depraved pastime of catching small bats and making them "smoke"cigarettes. This malicious attitude towards bats, added to the significant problem of vampire bats feeding on cattle [BATS, Summer 1997], has led ranchers and other citizens to conduct campaigns in which they burn known roost sites and kill every bat they encounter, regardless of species.

On top of these dangers, Bolivian bats are threatened by logging and habitat destruction, a common problem in many South American countries. The modification of a large portion of Bolivian habitats is affecting the natural structure of bat communities. Although all species suffer, some of the rarer, more specialized ones are becoming extinct in certain ecosystems, diminishing the level of diversity.

Recently, I evaluated the status of Bolivia’s bats and found that more than 60 percent of the country’s known species are threatened to some degree, and one–the false vampire bat (Vampyrum spectrum)–is endangered. By analyzing the distribution of these species in the ecological regions of Bolivia, I found that most of the vulnerable bats are living in the montane forest of Yungas, a fragile ecosystem damaged by development. The inter-Andean valleys and the altiplano (high plateau) region also contain threatened ecosystems, with only 18 species of bats living in them, though I suspect future research will reveal more.

Of special concern are the savannas. In marked contrast to many people’s idea of these grasslands as "empty,"the Llanos de Moxos, which is the second largest savanna in the neotropics, holds about 70 species of bats, including the endangered false vampire. Within the savanna are forest islands–small patches of forest that contain nearly five percent of the entire ecosystem. In the biggest forest island of about 50 acres, I found an astonishing 21 species of bats. Most of the savanna belongs to private cattle ranchers, the majority of whom are not concerned about how their livelihood may threaten the ecosystem. Of course there are a few visionaries, such as Bernardo and Peter Bauer of the Espiritu ranch, who have sup-ported research and conservation for years.

Other ecological regions are also threatened and must be taken into account for further research and conservation, such us the Chiquitania subhumid forest (with 26 species of bats), the Chaco lowland plains (34 species), and the tropical rain forest (77 species).

My concern for the bats of Bolivia began when I met Rodrigo Medellín, a BCI scientific advisor, during fieldwork at the Beni Biological Station Biosphere Reserve in 1989. Medellín is co-director of the PCMM1, the joint initiative of BCI and the Mexican Society of Mammalogists to protect bats that migrate between the U.S. and Mexico. After listening to his eloquent descriptions of his country’s bats, I felt I must learn more about the bats of my own country.

Eight years later, in 1997, after giving a presentation about bats to a group of 50 students, it became clear to me from the students’ amused appreciation of BCI’s bat photographs that the underlying premise of bat conservation was simple: once people get to know bats, they like them. That was when I understood the importance of having a more consolidated program in Bolivia, similar to the PCMM, to reach as many people as possible.

I discussed the idea of such a program with Steve Walker, BCI’s Associate Executive Director, at a conference later that year. Walker offered BCI’s full assistance, explaining that the PCMM’s conservation programs and Spanish-language materials were developed with the intention of extending them to as many countries as possible. After returning home, I found to my surprise, almost 20 people–bat biologists and other scientists and conservationists–interested in working with me to protect the bats of our country. In 1998, we formed the Programa para la Conservación de los Murciélagos de Bolivia (PCMB), or the Program for the Conservation of Bolivian Bats, and that August, BCI sponsored the first meeting of bat biologists in Bolivia.

In just four months since, the 20 PCMB members have accomplished several important objectives, with the help of BCI, the National Museum of Natural History of La Paz, the Bolivian Fauna Collection, and the University of San Simon. We have produced a preliminary assessment of the conservation status of Bolivian bats; added 19 species to the Action Plan of Threatened Species of Bolivia (according to IUCN2 categories); obtained a preliminary agreement with the Wildlife Secretariat of the Bolivian government to coordinate conservation matters at several state levels; presented a five-minute message on bats on a national TV show; and translated BCI’s popular "Bats Facts"card into Spanish.

We think these are good first steps toward our future goals, which will focus on vampire bat problems, bat programs in schools, habitat protection, and educational campaigns for TV and radio. So far, people–particularly children–are responding quite well when presented with the truth about bats. One of the most encouraging reports we have received is of a young girl who interrupted her parents’ dinner party in her nightgown to explain to the guests why it was important not to harm bats. If we are able to reach young people in such a way, we know there is hope for the bats of Bolivia.

Luis F. Aguirre is General Coordinator of the PCMB and Associated Researcher

of the Colección Boliviana de Fauna (Bolivian Fauna Collection). As a biologist, he is studying bats in Bolivia, focusing on savanna ecosystems.

2. International Union for the Conservation of Nature and Natural Resources 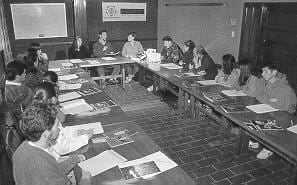 In August 1998, BCI sponsored the first meeting of the Program for the Conservation of Bolivian Bats. Amid their busy agenda, participants reviewed educational materials, including Spanish-language books and videos donated by BCI. In the future, the PCMB plans to produce materials specific to their region. 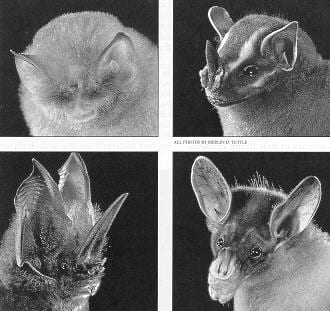