Professor of Wildlife Ecology at School of Forestry, Northern Arizona University, who focuses upon bat habitat relationships - why they live where they do 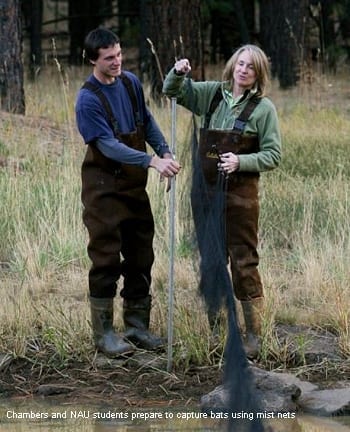 What is your focus in bat conservation and research?
I study habitat relationships –why animals live where they do –and how management or disturbances such as wildfire affect bats so we can help resource managers protect bat habitat. The diversity of bats in Arizona (28 species) means there are lots of questions to answer. I’ve worked on identifying roosts and activity areas for a number of species and am now working with a geneticist, Dr. Faith Walker of Northern Arizona University, to get a better understanding of bat ecology and genetics. We have developed a ‘Species from Feces’method to identify bats to species from their guano. We are also unraveling the mysteries of the spotted bat using DNA from living animals, museum specimens, and ancient mummies.

What is your most inspiring, exciting, or proud moment in your career?
During a sabbatical in Nicaragua in 2012 to understand impacts of forest fragmentation on bats (funded in part by BCI), on the next to the last night of netting, Arnulfo Medina, the leading bat biologist in Nicaragua, volunteers from the U.S., and I captured a new species for the country, Phylloderma stenops. This was an exciting night. Over the years of visiting Nicaragua and working with and helping to train new bat biologists, I’ve been rewarded by seeing the bat program grow tremendously, the species count for the country increase, and all the great work the bat biologists in Nicaragua are now doing. 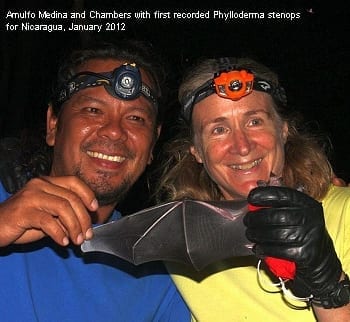 What’s your favorite species and why?
Euderma maculatum, spotted bat  – Unique coloration and hard to capture. The species was first documented in science in the late 1800s so it is relatively new. I’ve been curious about this species for over 15 years and have radio tracked these bats (they have huge home ranges), located roosts, and found spotted bat mummies over 2000 years old. Now that we have genetic tools in hand, we are unraveling even more secrets of the spotted bat.

University of Kentucky, biology (BS) and forestry (MS)
Oregon State University, wildlife ecology and forestry (PhD)
When I started college, I thought I’d become a veterinarian. However, I realized I wanted to work outside with animals, and discovered there was a career track in wildlife so I chose that route. My degrees in forestry help me understand the vegetation and habitat used by animals and how we affect habitat.

Do you have any advice for people who want to get involved in bat conservation?
If you want to handle bats, get your rabies immunizations, volunteer, and look for ways to make a difference on projects. Discuss your ideas with people already involved in bat conservation. If you don’t want to handle bats, you can avoid the immunizations and become part of a citizen science project and report sightings of bats to researchers tracking bat activity. Enhance your bat habitat by building a bat box and installing it near your home. There are lots of great ways to get more involved. 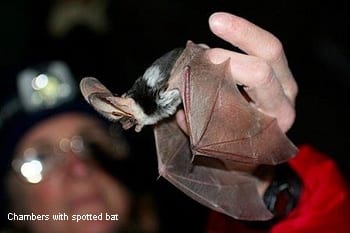 My first experience was attending a bat program in Richmond, Virginia decades ago when Merlin Tuttle talked about the unique features of these animals and I got to meet his guest, a live bat! Since then, I’ve had the good fortune to get to know or work with most of people who work with BCI. For example, I’ve collaborated with Jason Corbett on subterranean projects, Dave Waldien on international work in Nicaragua, and Dan Taylor on bats in wildfire-burned landscapes. I’ve also written or co-written articles for BATS Magazine based on my research. BCI provides a great network for bat ecologists and bat enthusiasts.