Thousands of spinning wind turbine blades may be threatening the survival of the hoary bat - one of North America’s most widespread migratory bats.  BCI and the wind industry are striving together to find the right path forward to protect and preserve bats from this threat.

Thousands of spinning wind turbine blades may be threatening the survival of the hoary bat – one of North America’s most widespread migratory bats. Bat Conservation International (BCI) and the wind industry are working together to find the right path forward to protect and preserve bats from this threat.

What’s long been suspected is now being confirmed: the numbers of bats being killed by wind turbines can have serious, rapid impacts on entire populations. New research by
a BCI scientist puts fresh urgency into the need to pursue a workable solution, and at least one bat species’ survival may depend on it.

A study that looked at hoary bat (Lasiurus cinereus) fatalities at wind energy facilities revealed the population of this species may plunge by a staggering
90 percent over the next 50 years— even if no new turbines are built.

For the study, the first of its kind, international experts, academics and biologists from several federal agencies came together to better understand whether fatalities from wind turbines may be causing large-scale species declines. Using a range of
estimates of hoary bats’ reproduction and survival rates, and by comparing those figures with known fatalities at wind turbines, the authors of the study described a variety of possible species-level impacts.

The study used conservative figures of bat fatalities: 128,000 hoary bat fatalities annually in the U.S. and Canada, and assumed no new wind turbines are to come online in the future. They found with the highest possible population estimate of 10 million
hoary bats, the species could still experience a 50 percent decline over the next 50 years.

With more conservative and likely population estimates, around 2.5 million individuals reproducing at a more realistic rate, that impact could deepen to a 90 percent decline within the next five decades.

But wind energy is only growing—producing 5 percent of today’s electricity generation in the U.S. and Canada, it’s expected to triple by 2050.

Winifred Frick, BCI’s Senior Director of Conservation Science and lead author of the paper, said the findings underscore the need for immediate action.

“These findings are a wakeup call. Our study focused on the hoary bat, which has the highest observed fatalities. Other migratory bats also have high levels of mortality from wind turbines. We need to implement significant conservation measures to reduce
mortality from wind turbine collisions and soon – effective conservation measures will help not just hoary bats but all bats that get killed by turbines,” explains Frick.

Part of the problem for determining actual population-level impacts on bats like the hoary bat, which is a solitary, tree-roosting, migratory species, is that they are hard to find and even harder to track over time. That makes it difficult to estimate
how many bats there really are, and how long they live even in the absence of wind turbines.

“In conservation we are often faced with the problem where we have to make decisions on imperfect data, and sometimes the persistence of species depends on that,” she said. “We can’t wait until we have perfect data, because we don’t have time.”

Between using emerging technology to track, gather data on and even repel bats from wind turbines, BCI has partnered closely with wind industry to find approaches to business that can be simultaneously bat-friendly but also economically sensible.

Bats’ natural curiosity about their environment does not serve them well when it comes to turbines. Michael Schirmacher, BCI’s Wind Energy Program Manager, said from analysis of infrared video of bats investigating the airspace around turbines, it’s clear
they have no inkling of their jeopardy.

“They have no awareness that they’re at risk,” Schirmacher said. “It’s not a learning experience, unfortunately. One hit is all it takes.”

Since the first reports of thousands of dead bats at a wind energy facility in West Virginia in 2003, BCI has been deeply involved over the last decade to understand the causes, and with the help of partners in government and the wind industry itself,
to seek solutions.

So far, the most effective method of reducing bat fatalities at wind turbines is to employ a strategy known as operational minimization, or curtailment. Dozens of studies have shown
that bat fatalities could be reduced from 44 to as much as 93 percent just by limiting the rotation of the blades during narrow windows of time—at night, under low wind conditions from late summer through early autumn.

Bats tend to be killed more often at low wind speeds, blowing at 11 to 13 miles per hour, and many turbines don’t even begin to push energy into the grid until winds pick up to near those speeds. Moreover, the majority of fatalities take place during
the warm nights of autumn migration. Rotating turbines out of the prevailing wind, or angling the rotor blades parallel with the breeze until wind speeds are slightly higher, can significantly reduce fatalities.

In late 2015, the American Wind Energy Association (AWEA) announced a voluntary program for its members that aimed to reduce bat fatalities by about 30 percent. The recommendations followed those put forward by the Bats and Wind Energy Collective Cooperative
(BWEC), a research consortium of government, industry and non-profit partners including BCI.

Participation has been widely accepted by the wind industry, though a great deal of the work BCI has been pursuing in the wind arena in recent years entails a better understanding of how, why, where, when, and which species of bats are killed at wind
facilities.

Though the reduction of electrical generation capacity caused by curtailment varies by market, some studies peg the loss of capacity at anywhere from 1 to 3 percent.

Cris Hein, Director of BCI’s wind energy program and Program Coordinator for the Bats and Wind Energy Cooperative (BWEC), said he thinks it’s very possible to devise even more specific recommendations
to minimize reductions in electricity generation. But it requires much more information—including details like the exact time of night bats interact with wind turbines, weather data, such as temperature and barometric pressure, and exact wind speeds
and direction.

“In my mind, you couldn’t ask for an easier fix,” Hein said. “In most situations, it’s only required at night, under certain wind conditions, and for a couple months out of the year. Even at a coarse scale, that’s pretty well refined. But we’re trying
to see if we can narrow it down even more, by looking at other variables the industry could use to reduce the conditions under which curtailment should be used.”

In a statement released when the curtailment strategy was announced, AWEA senior director for environmental affairs, John Anderson, said the voluntary adoption shows the wind energy industry’s commitment to pursuing protective strategies. “Our industry
values all wildlife and habitat,” he said. “By proactively employing this measure to reduce our already low environmental impacts further, consumers can have even more confidence in buying clean, affordable, and carbon-free wind energy.”

“We do have a collaborative relationship with the industry, and this is an opportunity to work with them to find a solution,” Hein said.

There’s some evidence to suggest that some species of bats are attracted to something about the wind turbines themselves, but what that is, if anything beyond sheer curiosity, remains unknown. Innovative new technologies, as ever in the bat world, are
necessary to illuminate their cryptic behaviors.

“It’s natural to go to the technology shed to try and find something to understand what the bats are doing up there,” Schirmacher said.

One promising solution Hein and Schirmacher are investigating, along with federal agency and private industry partners, is the effectiveness of ultrasonic acoustic deterrents mounted on the wind
turbines themselves. The idea is to “jam” bats’ echolocation or make the airspace around the turbine aurally uncomfortable, thereby keeping bats away. If proven, deterrents could eliminate the need for curtailment altogether.

Field tests are still under way to determine how environmental conditions like humidity affect ultrasonic transmissions, whether bats can eventually tune out interference calls, which bats are most affected, and the degree to which ultrasonic acoustic
deterrents work to begin with.

Understanding how bats approach and use the airspace around wind turbines is another key area of research where technology is playing a big role. GPS tags have finally gotten small enough to
be attached to bats, albeit larger species, so that researchers can track bats’ movements more closely during migration and nightly foraging.

High-resolution thermal cameras are also allowing BCI and its research partners to better see what even tiny 12-gram bats are doing at night around the turbines, Schirmacher said. The U.S. Geological
Survey has been a key partner in this work, and in developing software to help streamline analysis of the resulting footage.

“This technology helps us understand better why the bats are there or how they’re flying across the landscape,” Schirmacher said. “By learning migratory pathways with GPS, for example, we can suggest siting new turbines away from those areas to minimize
costly impacts.”

And by comparing video data with environmental information already being collected by the turbines themselves—wind speed, humidity and temperature—researchers can pinpoint which bats are dying, when and where, and under what conditions, to even further
define dangerous conditions for bats.

“For a long time, we’ve had to look on the ground for dead bats under turbines, and could only identify that a bat died the night before and what the average conditions were,” Hein said. “Getting real-time conditions on when bats are near turbines is
helpful for refining reduced operations. These cameras have really opened the door to a better understanding of bat behavior and timing around wind turbines.”

So though the outlook at the moment is grim for the hoary bat and other migratory species, there are many paths and possibilities moving forward. Continuing to work closely with private industry and government partners is critical to ensuring that wind
energy and bats both have a viable future.

“We have the goal of working collaboratively to resolve this issue that meets everybody’s needs,” Hein said. “Not only BCI’s goals of protecting bats, but also in being able to generate renewable electricity. But until we can find a solution that’s accepted
by the conservation community and federal agencies, and is cost-effective enough for the industry to buy into, we have our work ahead of us.” 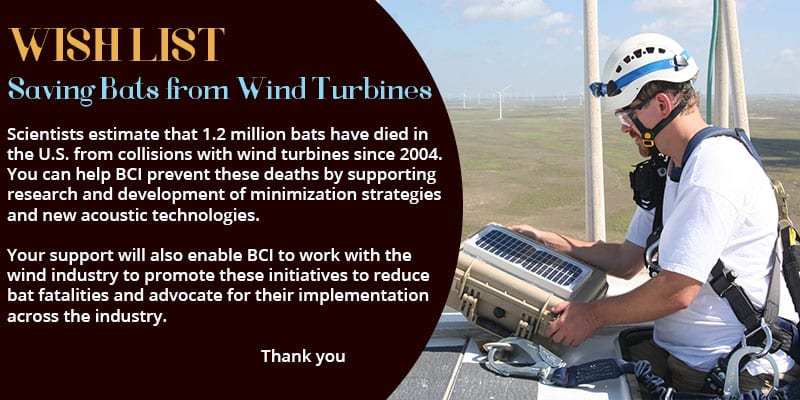