The stakes were high: the continued survival of flying foxes and the rain forests they support on several island nations of the central and western Pacific. A joint United States and Swedish proposal to protect Pacific island flying foxes from commercial hunting and trade was up for a vote at the 1989 Convention on International Trade in Endangered Species of Wild Fauna and Flora (CITES) in Lausanne, Switzerland. After months of intensive efforts, the proposal received unanimous approval on October 19 by all nations attending the conference.

The CITES treaty is the principal tool for regulating international trade in endangered wildlife and plants. Effective since 1975, it now includes 103 countries as parties or member states. These governments have the responsibility of implementing the treaty. Species listed on Appendix I are given maximum protection because trade is prohibited except under very special circumstances. Trade in Appendix 11 species is controlled through permits and allowed only when deemed nondetrimental to the survival of wild populations.

BCI was represented at the conference by Verne Read, chairman of the Board of Trustees, and myself. We were joined by Dr. Thomas Elmqvist of the Swedish World Wildlife Fund, and BCI members Amie Brautigam of the International Union for the Conservation of Nature, Drs. Elizabeth (Dixie) Pierson, William (Bill) Rainey, and Paul Cox. As we rejoiced over the final approval, I realized that our success was the result of four years of hard work by many people.

BCI member Arthur Greenhall was the author of the first CITES proposal for flying foxes which led to nine species being listed on Appendix 11 in 1987 [BATS, Spring 1988]. However, bat populations on Pacific islands continued to be harvested at alarming rates (more than 18,000 per year). Dixie Pierson and Bill Rainey wrote a new proposal to provide greater protection by adding flying foxes to Appendix 1. Modified versions of this proposal were submitted by the governments of the United States and Sweden for consideration at the 1989 meeting of party nations.

As BCI planned for the conference, we anticipated that delegations would support the new proposal if they were well informed. Pat Morton, BCI's Director of Education, designed an exhibit to inform party nations about the ecological and economic importance of flying foxes. Delegates learned how these bats are threatened with extinction by commercial hunters who ship large numbers of these gentle animals across international borders into Guam where they are eaten as a delicacy. The exhibit became a focal point for many of the delegates who stopped to learn about the proposal and to pick up a poster of the Samoan flying fox.
Prior to the final vote, BCI hosted a well-attended reception where I gave a slide presentation dramatizing the conservation status of flying foxes and the importance of protecting them. The reception also provided an opportunity to respond directly to questions from delegates. As the elephant ivory trade and many other issues were being hotly debated, we explained the merits of our flying fox proposal to as many of the more than 800 people from around the world as we could meet.

Amending the CITES Appendices to provide maximum protection against the commercial hunting and international trade of flying foxes is a landmark action for bat conservation. Such action, however, is only effective when it can be implemented. To address this issue, BCI is organizing and hosting a conference in February 1990 (see sidebar), which will focus on assisting the island nations and the U.S. Fish and Wildlife Service with enforcement of the new CITES amendments.

BCI wishes to thank the delegations from Sweden and the United States for recognizing the importance of the flying fox conservation problem and for their outstanding efforts with the proposal. We also thank the many BCI members who responded to our request for letters in support of the proposal, and the country delegations and non-government organizations for supporting increased protection for these animals. We are very grateful to Amie Brautigam of the IUCN (Trade Specialist Group) for her time and efforts on behalf of bats and for valuable advice on the logistics of the conference. We thank the Swedish Society for the Conservation of Nature and WWF-Sweden for partial funding of Dixie and Bill's trip to Lausanne. We are especially grateful to Verne Read for his enthusiastic support of flying foxes and for funding BCI's successful efforts at the 1989 CITES conference. 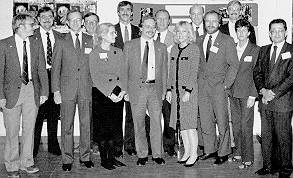 The United States delegation, headed by Constance Harriman (fourth from right), Assistant Secretary of the Interior for Parks, Fish and Wildlife, gathers in front of BCI's exhibit at the 1989 CITES conference in Lausanne, Switzerland. In collaboration with the Swedish delegation, they were successful in gaining maximum protection for flying foxes under the CITES treaty. PHOTO By GARY L. GRAHAM 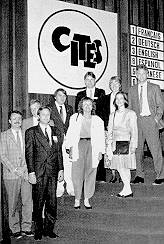