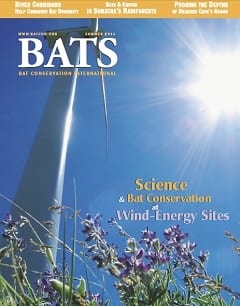 “How deep is it?” That’s the question I asked myself during my first trip to Bracken Cave in 1976. And I asked it twice. I later discovered that most people who visit the bat-filled cave have the same dual query.

First-time visitors arrive excited and anxious for the bats to emerge. While waiting, they focus on the dark maw of the cave’s entrance and wonder how deep it extends into the earth. The question fades when the cyclone of bats begins to whirl up from the cave and into the sky. As the initial awe subsides, the trip leader will discuss how many tons of insects those millions of bats will eat each night and how the cave’s immense mounds of guano were once mined for fertilizer and (during the Civil War) for saltpeter to make gunpowder.

It is usually then, as a pungent odor drifts up from the cave, that people ask, “How deep is it?”

The answer: No one knows. But stories from long-ago guano miners suggest the back end of the cave was dug down 30 to 60 feet (9 to 18 meters) without reaching the bottom of the guano.

Mylea Bayless, BCI’s Conservation Programs Director, contacted me to ask about “coring” the guano – using a hollow drill to extract a slender, intact column of material from top to bottom. The scientific benefits of analyzing such a column would be many and important. She wondered, for instance, if we could use radiocarbon dating to establish the age of the oldest layers, which could reach back centuries or even millennia. Could DNA analysis identify any bat species that might have preceded today’s Mexican free-tailed bats? And what insects were earlier bats eating?

Mylea contacted me because I am a longtime BCI member and a geologist who has studied the cave, and especially because I’m the Executive Director of the National Cave and Karst Research Institute (NCKRI) in Carlsbad, New Mexico. Mylea and I had worked together to make NCKRI headquarters the world’s first building designed to include a bat roost. Now we would work together on the world’s first geophysical survey of bat guano.

The entrance to Bracken Cave was formed by an ancient, enormous collapse along a cave passage. Guano-covered breakdown (rocky debris) is obvious in much of the cave. Before coring the guano, we had to find where it was deepest and without buried rocks that would block the coring equipment. NCKRI often uses electrical resistivity (ER) equipment to detect subsurface cavities such as cave passages, so we took it to Bracken.

ER works by placing stainless steel electrodes into the ground, applying voltage through a couple of electrodes, measuring it at a couple of others, and then calculating the electrical resistivity between them. Electrode pairs that are close together measure resistivity at shallow depths, while those that are further apart measure greater depths. Resistivity reflects how easily electrical current can pass through different materials in the ground: bedrock, clay, soil, guano, etc.

By taking measurements between dozens of combinations of electrodes, computer analysis produces a profile of resistivity – like a slice through the ground – beneath the line of electrodes.

BCI Bracken Cave Preserve Manager Fran Hutchins and I scheduled the ER study for January 2014, when most of the bats would be at their winter homes in Mexico.

We established four arrays: two of them 184 feet (56 meters) long, one along the cave’s west wall and the other down the middle. A third array stretched 262 feet (80 meters) along the east wall. The fourth formed a 46- by 39-foot (14- by 12-meter) grid at the back of the cave. The lateral surveys would produce two-dimensional profiles, while the grid was designed for a three-dimensional resistivity image.

Fran arranged for a team of volunteers from the Bexar Grotto – the National Speleological Society’s San Antonio, Texas, chapter – to help us. A video crew from ResearchWild.com recorded the action and also helped haul, place, and collect the heavy cables and other equipment.

This was far from a typical ER survey. We were all dressed in coveralls and respirators, and the electronic gear was bagged for greater protection. Unlike at many bat caves, the guano in Bracken is dusty and floats through the air, invading noses, lungs, clothes and electrical connections.

Since I was concerned that the fluffy guano would not give us good electrical connections into the ground, we poured salt water on the electrodes to assure reliable results.

When NCKRI does ER surveys on the surface, we use high-precision GPS equipment to get accurate coordinates for each electrode. At Bracken, we had to use a modified cave-surveying technique to get the precision we wanted.

And finally, we spent a lot of time decontaminating our equipment. BCI tests within the cave have found no evidence of the fungus that causes White-nose Syndrome, but to ensure safety, we cleaned all 2,185 feet (666 meters) of cable, 112 electrodes, the resistivity meter and other equipment that entered the cave.

The ER set-up, surveys and cleanup took four days. Data processing – and getting the smell of guano out of my nose – took several days more – but it was worth it.

I had suspected the middle of the passageway wouldn’t be good for coring, and the ER results confirmed it. There is too much breakdown mixed with the guano. The three areas with the least buried breakdown were found under the ER lines along the cave walls and below the 3D array.

ER surveying requires a trade-off between depth and detail. We focused on detail – spotting small rocks that could block the coring equipment – so we spaced our electrodes only about three feet (1 meter) apart and never saw the bottom of the guano.

How much deeper is the guano likely to go? Well, Bracken Cave is located near Natural Bridge Caverns, and the two share a similar origin. Both formed as large passageways dissolved from the limestone, followed by the collapse of part of the passage. In Natural Bridge, you can follow the tour trail down to the original passage, roughly 150 to 211 feet (45 to 64 meters) below the elevation of the entrance.

Bracken Cave starts out 20 feet (6 meters) higher than Natural Bridge and extends to a depth of 118 feet (36 meters) before access to any deeper passages is filled with guano. Assuming the two caves formed in the same strata and at similar elevations, Bracken’s guano may extend about another 33 feet (10 meters) deeper, but this may be difficult to see with resistivity surveys.

The guano compacts and becomes more moist and clay-like with increasing depth. The lowest elevations in our surveys show very low resistivities, which could signal moist and compacted guano – or perhaps moist clay that predates the bats’ arrival. The answer to that puzzle cannot be found in our initial data. But we may soon find out.

This coming winter offers an opportunity for additional guano studies, and we are already planning more ER surveys. Our goal this time will be reaching to greater depths to locate the bottom of the guano heaps and the buried bedrock of the cave floor.

Coring is planned to follow the new ER surveys, with a multidisciplinary partnership from the Mammoth Cave International Center for Science and Learning in Kentucky, the Southwest Research Institute in San Antonio, Texas, and the University of South Florida in Tampa.

While it’s easy to think of the guano in Bracken Cave as just a big pile of – well, you know – I expect that the next phase of resistivity and coring research will prove it to be an incredibly valuable pile of paleoclimatological and paleobiological information. Stay tuned.