Microorganisms play a crucial role in maintaining the delicate ecological balance of the earth. They revitalize the soil by recycling the minerals and nutrients of decaying matter, and many are essential to the healthy growth of plants. Microorganisms also affect our lives more directly in the manufacture of such items as food products, detergents, antibiotics and antitumor drugs.

A marvelous symbiosis exists between these organisms and bats. Bacteria in the mammalian intestinal tract aid in the breakdown and digestion of food. These organisms possess enzymes capable of degrading a vast array of substances. Countless microbes are regularly excreted along with waste products, and together with soil organisms, they constitute the microbial population of a bat guano deposit.

Picture a cavern with a large population of bats depositing thousands of pounds of droppings annually. A chemical analysis of the guano reveals a substance rich in carbon, nitrogen and vital minerals. Some of this falls into small pools within the cave. When it enters the water, a nutritious broth is formed, supporting the growth of numerous microorganisms. These in turn become food for tiny protozoan animals, and together they supply nutrients for fish and crustaceans.

Until recently, very little research had been conducted on the microbial ecology of such an environment. Our laboratory, with the cooperation of Bat Conservation International and generous support from Symbion, Inc., a Tennessee biotechnology firm, has just begun a research program to study the microbial ecology of bat guano. The potential benefits of this study are tremendous.

For several years my research has focused on locating microorganisms that produce compounds of industrial importance. The search has concentrated on extreme environments based on the assumption that such environments are enriched with novel microorganisms, and this has indeed proven to be the case. My travels have led me from less than dramatic sewage treatment plants to the magnificent glaciers of the High Andes. Little did I realize that what I thought to be a somewhat unexceptional trip to "shovel guano" in Bracken Cave would evolve into an intense fascination with the microbial activity in the unique environment of bat caves.

In central Texas, Bracken Cave is summer home to some 20 million Mexican free-tailed bats (Tadarida brasiliensis), sometimes also known as "guano bats." The initial trip to Bracken was directed toward isolating bacteria capable of producing certain enzymes that are functional under extreme conditions. To my surprise the cave's inhospitable dry environment yielded a population of microorganisms as dense and as diverse in species as any environmental sample I have ever processed. When I saw the chemical analysis of the guano, things began to make sense. The printout read like an elemental analysis of the manufactured bacteriological growth media used in microbiology laboratories throughout the world.

Some of the organisms yielded by the cave appear to be completely new species and possibly new genera. Several of these produced some rather unusual enzymes, prompting return trips–one of which led me to Dr. Merlin Tuttle and Bat Conservation International. My subsequent education in bats led inevitably to an interest in looking at more bat colonies and guano deposits, and the impetus for our current project was born.

A major focus of the project is the study of microorganisms capable of transforming ammonia and ammonium compounds (nitrogen-containing molecules) to more oxidized forms of nitrogen (a process called nitrification). One of the most serious urban problems facing us today is the removal of ammonium compounds from industrial and municipal waste. If ammonia is discharged into lakes and rivers, a process called eutrophication occurs, and microorganisms in the water transform the ammonia to other nitrogen compounds while consuming vast amounts of oxygen. This oxygen depletion is catastrophic to fish and other wildlife in the aquatic environment. We are now discovering bacteria in bat guano, which is rich in ammonia, that are very efficient in the nitrification process. In the near future these organisms may be used to remove nitrogen from industrial waste before it reaches our lakes and rivers.

Another potential product from guano microorganisms is an enzyme called chitinase, a protein capable of converting the chitin exoskeleton of insects and crustaceans to simpler sugars. Excluding cellulose, chitin is one of earth's most abundant natural sources of complex carbohydrates (polysaccharides). Waste from processing crustaceans, such as shrimp and crabs, forms a major source of inexpensive raw material for the enzymatic conversion of chitin to a more easily fermentable sugar. This, in turn, may be used for alcohol fuel production. Another potential use for chitinase producing microorganisms is the biological control of insect and nematode pests.

Few people realize the impact of microbially produced products on our lives. In addition to such well known products as beer, wine, bread, cheese and yogurt, microorganisms are also used to produce many important enzymes (such as those used in meat tenderizers), amino acids, vitamins, antibiotics, pesticides, herbicides, etc. These products benefit such diverse areas as agriculture, medicine, pharmaceuticals, textiles, paper production, photographics and food production.

In our conservation efforts we must recognize that in something as complex as an ecosystem, unseen activities can have a major role. The depositing of guano and subsequent colonization by microbes can be as crucial to a cave ecosystem as plant pollination and rain are to a tropical rain forest. The resultant food chain can play a crucial role in a cave ecosystem, for bat guano often provides the major influx of nutrients in an environment devoid of photosynthesizing plant life. An ounce of bat guano contains billions of bacteria, and a single guano deposit may contain thousands of bacterial species, most of which we know nothing about.

When a cave-dwelling bat colony is lost, thousands of other species may also perish without our ever knowing their actual or potential benefits. Such a realization necessitates careful attention in conservation planning. Only by studying all aspects of bat impact on associated ecosystems, will we be able to assess the full importance of these fascinating animals.

D. Bernie Steele is a Senior Research Associate in the Botany and Microbiology Department at Auburn University, Alabama where he directs an industrial technology research program in microbial physiology and ecology. 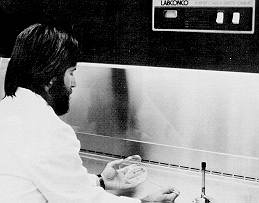 In search for microorganisms that produce compounds of potential industrial importance, Bernie Steele isolates bacteria in a sterile biological cabinet. 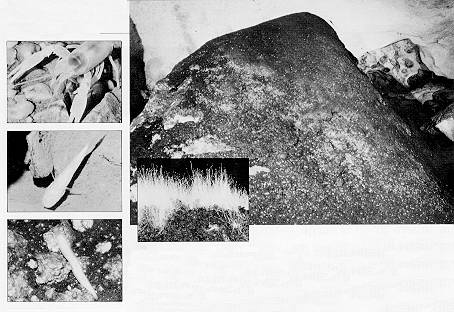 A cave ecosystem that includes bats is rich in many other kinds of life: cave crayfish, cave fish, flat worms, and fungi are only a few of the many organisms that often depend on nutrients found in bat guano. A single deposit also may contain literally thousands of bacterial species, each with the potential to produce enzymes of importance to people. PHOTOS BY MERLIN D. TUTTLE